What happened to Breonna Taylor and how did #SayHerName start? Four officers charged in her killing spark Internet outrage

Taylor’s killing had only one officer involved in the raid, Brett Hankison, already facing charges. The two additional officers weren’t immediately charged, though. Four officers participated in the botched house invasion that killed Breonna Taylor, it has now been established. 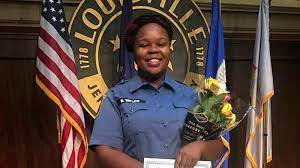 In a “no-knock” raid on March 13, 2020, Louisville police were looking into alleged narcotics trafficking when they forced open Breonna Taylor’s door. Kenneth Walker, her lover, used a lawfully held gun to fire shots at the police. Taylor was killed when the officers returned fire and fired 22 bullets at the residence.

Prosecutors claim that Brett Hankison shot at Taylor’s residence ten times through a draped window and a glass door. In the meantime, the policeman claimed to a Kentucky grand jury that he started shooting as soon as the shooting started.

According to Reuters, the prosecution also claimed that Jaynes and Goodlett afterwards met in a garage to fabricate a tale and hide the fictitious evidence they had used to justify the raid.

What does the online movement #SayHerName mean?

In the United States of America, the #SayHerName social movement seeks to increase awareness of Black women’s experiences with police brutality and gender-specific police violence.

Activists, demonstrators, and Breonna Taylor’s family met in Louisville in June 2020 for a vigil to celebrate her birthday and demand that the murderers be charged right away. Taylor Palmer’s mother, Tamika Palmer, stated via the BBC at that same vigil:

It was initially lonely, but it is incredible to see how many people are speaking up for her just by using her name.

Breonna Taylor’s murder, along with those of George Floyd and Ahmaud Arbery in the year 2020, had already sparked widespread protests. Every social media user, including celebrities and followers, denounced these murders.

Following the unprecedented decision to arrest four Louisville and Kentucky police officers for the failed raid that resulted in Breonna Taylor’s death, social media users took to Twitter to analyze the decision.

Taylor’s family settled a $12 million (£9.4 million) lawsuit against the Kentucky city related to her passing.

Explaining the prey ending: Does the predator turn become the prey?