Anna Marie Jernigan (born July 15, 1998) is an American professional wrestler who goes by the ring name Anna Jay. She is a part of the All Elite Wrestling stable The Dark Order and is signed to All Elite Wrestling. Anna Jay has been with AEW since 2020, and while some fans believe they know everything about her personal and professional life, the majority of those followers are likely unaware of her real identity, Anna Marie Jernigan.

In July 2018, ay began training at One Fall Power Factory. She had a shoulder injury during training in April 2019 that necessitated surgery and kept her out of play for 4 to 6 months. Jay made her debut at Glacier’s charity event “The Battle of Altama” on September 14, 2019. Jay defeated Thunder Blonde in a hair versus. hair match at a Georgia Premier Wrestling event in January 2020. 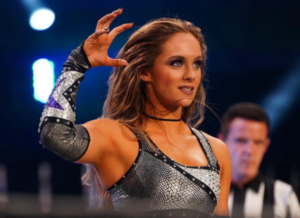 On April 1, 2020, Jay made her debut in All Elite Wrestling, losing to Hikaru Shida in a singles match on Dynamite. That same month, she was revealed as a new employee of the organisation. On the June 17 episode of Dynamite, she was aided backstage by The Dark Order after losing to Abadon. In the AEW Women’s Tag Team Cup Tournament: The Deadly Draw, Jay joined up with Tay Conti. They defeated Nyla Rose and Ariane Andrew in the quarterfinals, but lost to Ivelisse and Diamante in the semifinals. On the August 27 episode of Dynamite, she was revealed to be a member of The Dark Order.

Jay challenged Shida for the AEW Women’s World Championship on the November 25 episode of Dynamite, but she lost. On December 30, she and Conti defeated Britt Baker and Penelope Ford in the Brodie Lee Celebration of Life, a special episode of Dynamite dedicated to the late Dark Order leader Brodie Lee. Jay was scheduled to compete in the AEW Women’s World Championship Eliminator Tournament in February 2021, however she was forced to withdraw due to a shoulder injury sustained while training. She had surgery the next month and was told she wouldn’t be able to wrestle for 6–12 months.

On the September 1 edition of Dynamite, Jay returned from injury to save Conti from an attack by Ford and The Bunny after Conti defeated Ford in a match. Jay played in the AEW women’s TBS championship tournament on the November 3 episode of Dynamite, losing against Jamie Hayter and thus eliminating herself from the tournament.

Wrestling fans are some of the most passionate and knowledgeable in the world, with some of the most ardent fans claiming to know all there is to know about specific wrestlers. Anna Jay has been with AEW since 2020, and while some fans believe they know everything about her personal and professional life, the majority of those followers are likely unaware of her real identity, Anna Marie Jernigan.

AEW is only three years old, but it has already amassed an impressive roster. The women’s division of the company still needs work, but it’s full of ladies like Anna who have a lot of potential. Anna has a bright future ahead of her, and if she continues to improve, she will undoubtedly become one of AEW’s top talents.

Tay Conti is popular among AEW fans not just because of her appearance, character, and athleticism, but also because she has a promising future. That future exists mostly because she is young, which implies Anna Jay’s future is much brighter because she is the TayJay duo’s younger member.

Anna turned 23 years old this summer, having been born on June 15, 1998. Anna is one of the youngest wrestlers on the AEW roster, and despite her youth, she has already made a name for herself.
Although the year 2021 is drawing to a close, there are still plenty of predictions for AEW to be made, one of which being a Dark Order split. Although the group’s future is unknown, no one can dispute that the stable has aided Anna Jay’s development. Fans may be astonished to hear that she isn’t even the shortest member.

Anna is 5 feet 8 inches tall, which makes her taller than John Silver, and it shows when they’re on camera together. Taller ladies don’t always receive the same kind of pushes as shorter women, for whatever reason, but AEW has done a good job with Anna so far.