Recently, Selena Gomez and Andrea Iervolino were pictured unwinding in Positano, Italy. Iervolino is a well-known businessman, entrepreneur, and producer of motion pictures. In 2003, he released his debut movie, The Cavalier of Italy. In 2016, the two first connected on the set of In Dubious Battle.

The couple could be seen sunning on a yacht in photos taken during the trip. Gomez was dressed in a black swimsuit, while Iervolino wore a green T-shirt and white boardshorts. Later, Selena and Andrea were spotted swimming together in the ocean while Iervolino held Gomez’s hands and the two chatted. 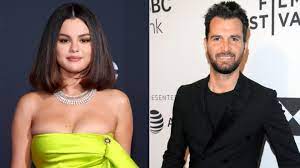 Everything you need to know about Andrea Iervolino

Andrea Iervolino, who was born on December 1st, 1987, is the founder and CEO of numerous businesses, including the blockchain-based platform TaTaTu. The 34-year-old producer and entrepreneur’s life was not without difficulties, though. Although his grandfather left the family business in incompetent hands after his death, his father came from a wealthy family, and as a result, the family went bankrupt.

When Andrea and his friends launched their modest tech company in Cassino, Italy, they were 13 years old and sold websites to small business owners. He moved out of his family when he was 15 to work as a producer’s assistant on Broadway-style productions.

The Cavalier of Love, his first film, was subsequently made and released in 2003 in Italy. However, he was unable to get the movie shown in neighborhood theaters, so he created the Cineschool Day program to give students access to discounted movie tickets instead. Classroom discussions followed, and Andrea built up a collection of existing movies with significant social issues and introduced them to schools.

In 2015, Exclusive Media Group’s film catalog was acquired to an extent by Andrea’s company and the private equity firm Raven Capital Management, totaling 85%. The AMBI Gala Foundation was subsequently established by Iervolino and Lady Bacardi, and the inaugural AMBI Gala was held prior to TIFF. The Prince Albert II of Monaco Foundation received the funds from the event.

Which actors will appear as special guests on Season 2 of Only Murders in the Building?

Waiting for the Barbarians, a movie by Andrea Iervolino, had its world premiere at the 76th Venice International Film Festival. In 2020, he and Milos Bikovic established Iervolino Studios.

The well-known producer is also the creator of SPACE 11, a company that works with SpaceX to produce projects in space.

Kyle Meany: Who Is He? Officer Accused In Shooting Of Breonna Taylor