In National Geographic programs like Lost Cities and Welcome To Earth, where he explores various locations including tombs and ancient ruins, Albert Lin is well known for his appearance.

His audience takes notice of his artificial leg and wonders what happened to the explorer’s natural leg for him to need a prosthetic and still be so skilled at what he does.

Let’s find out more about the fearless explorer and scientist by following his journey from being an adventurous man to losing his leg and continuing to pursue his passion for exploration with his companion without looking back.

What Happened To Albert Lin’s Leg? Injury Details Summed Up

The most well-known explorer is Albert Lin, who is well known for the National Geographic television program Lost Cities with Albert Lin. In the past, he suffered a leg injury that required him to wear a prosthetic leg.

Lin extended his right leg out to stop his friend’s truck from rolling as they were exploring in a 4×4 vehicle close to UC San Diego.

His bones were broken when the car landed on his leg due to the sliding of the vehicle on the off-road terrain that caused his leg to become entangled.

After immediately bringing Albert to a hospital, the medical staff attempted to save his limb, but Lin was faced with a difficult choice due to various infections and a month-long treatment.

The adventurer made the decision to let go of his leg and have it amputated in order to stop the infection before it might worsen. He chose to have his right leg amputated rather than continue to live on an infected limb.

Albert took a while to adjust to his new life as an amputee after having his leg amputated below the knee. Lin adjusted to his new life with prostheses with the help of appropriate physical therapy and rehabilitation, but it was still very difficult for him.

The TV host sought psychological assistance after regular medications failed to relieve his phantom limb pain. With the help of yoga and meditation, Albert was able to return to his new life with a positive outlook and continue to explore without looking back.

Albert Lin is most recognized for his work as an adventurer and host for National Geographic. The explorer is an American who holds a bachelor’s degree in science and a master’s degree in mechanical and aerospace engineering.

Since 2009, the TV personality has had a position as an associate research scientist in the California Institute’s Telecommunications and Information Technology department at UC San Diego.

Additionally, since 2004, Lin has served as a member of the advisory board for the Harvard Business School’s Digital Initiative and as the founding director of the Center for Human Frontiers at UC San Diego.

In addition to his academic expertise, he used geophysics, drones, satellites, and ground research to significantly contribute to the exploration of Genghis Khan’s hidden tomb.

He keeps records of his explorations as a National Geographic explorer. The Forbidden Tomb of Genghis Khan, the Lost Treasure of the Maya, the discovery of China’s Megatomb, and the Lost Cities with Albert Lin are only a few of his ventures.

Lin had an injury and had his leg severed in 2016 while exploring China’s Megatomb series. He still enjoys exploring, going to new places, and learning new things in spite of the tragedy. 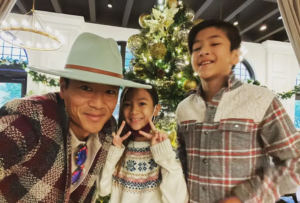 Albert Lin with his children during the holidays

Wife Of The TV Host Revealed

Shannon Bailey and Albert Lin were married and had two children together before splitting up in the early 2010s. The media is kept in the dark about his relationship with his first wife and children.

But when the National Geographic explorer discussed his leg injuries, he also made it known that he was dating a new person. In 2016, Lin claimed to have been dating Bruna Bortolato when he suffered a horrific leg injury.

Although it was difficult and frightening for the host, one positive result was that Lin met his love, Bruna, who had just recently met Albert and had begun seeing him but had remained by his side during his rehabilitation.

In an interview, Albert revealed their love story and thanked Bruna for sticking by him during such a trying time. Additionally, he admitted that having her at his side helped him temporarily forget the pain.

His Brazilian partner is passionate about yoga, meditation, and teaching others how to deal with mental problems. In addition, yoga and meditation really assisted Albert in overcoming his psychological problems following his amputation.

American scientist, technologist, explorer, and television broadcaster Albert Lin was born on March 22, 1981. UC San Diego’s California Institute for Telecommunications and Information Technology has employed Lin as an associate research scientist since 2009. He has been a member of the Harvard Business School’s Digital Initiative advisory board since 2004. He founded the crowd-based analytics firm Tomnod, which commercial satellite imagery supplier DigitalGlobe purchased in 2011. The Center for Human Frontiers at UC San Diego, which seeks to use technology to enhance human potential, was founded by him.

In order to find the missing Genghis Khan tomb, Lin used a variety of tools in 2009, including satellites, drones, geophysics, and extensive ground excavation. Lin received the 2009 Adventurer of the Year award from National Geographic for his efforts on the Valley of the Khans project.

For National Geographic, Lin has hosted several television episodes detailing his excursions, such as Forbidden Tomb of Genghis Khan (2011), China’s Megatomb Revealed (2016), Lost Treasures of the Maya (2018), and Buried Secrets of the Bible (2019). (2019). He has been the host of the Disney+-exclusive National Geographic series Lost Cities with Albert Lin since 2019. Lin most recently appeared in the Disney+ documentary Welcome to Earth, which was presented by Will Smith (2021). With a focus primarily on non-intrusive technologies, Lin’s unique type of expedition allows for in-depth research while also respecting the territory and customs of indigenous peoples.

Both the Nevada Medal and the Lowell Thomas Medal have never before been awarded to a recipient so young. Lin has been a National Geographic Explorer since 2010.

In 2016, Lin was involved in an off-roading accident that resulted in the amputation of his right leg. He survived the tragedy. Since that time, he has relied on a highly advanced prosthetic leg, which has enabled him to continue to both lead and take part in expeditions that require a significant amount of physical effort. Lin has become a strong champion for augmenting and increasing the quality of human existence, particularly for amputees, with the help of technology, largely through the Center for Human Frontiers that he founded.

He is a father of two kids.

Where Is Dr. Lin Now?

Dr. Lin is currently the co-director of both the Big Pixel Initiative and the Engineers for Exploration Program, both of which are funded by the National Science Foundation (NSF). The Engineers for Exploration Program engages students in airborne, terrestrial, and undersea robotics for exploration seeking economic, ecological, and societal insights within over 500 Million km2 of ultra-high resolution satellite imagery of our planet.

Newsweek, The Washington Post, BBC, NPR, CBS, ABC News, TEDx, HBR, Wired Magazine (US & UK), al Jazeera, and National Geographic Magazine are among the publications where Lin has either made a contribution or been featured. Lin has also narrated and hosted a number of documentaries for National Geographic and the BBC.

Additionally, Lin serves as a consultant for the Digital Initiative at the Harvard Business School.

National Geographic Adventure Magazine’s readers voted him their “Readers’ Choice Adventurer of the Year” for 2010, and he won.

In addition, he was presented with the Nevada Medal in 2014 for accomplishments in research as well as the Lowell Thomas Medal in 2011 for advancements in the field of exploration.

As of the year 2021, well-known adventurer Albert Lin will have reached the age of 40.

It was in the year 1979 when he was born, and the 22nd of March is his birthday. Astrologically speaking, he is a person born under the sign of Aries. Lin was born in the United States, namely in the city of San Diego. He is of Asian descent yet retains American citizenship. He is also of the American nationality.

Because he is of mixed ancestry, he has dark eyes and hair that is spiky. His eyes are dark, and his hair is spiky. Additionally, he has a height of 5 feet 8 inches, making him a tall person.

Ralph Eggleston Death Cause – What Happened To Him? Pixar Animator Passed Away