A famous Youtuber and Instagram Star, Zachary is originally from the US. The star is mainly famous for his comedy mimicry and humor. He is all set for modeling shoots. The social media star also posts gaming content on his popular self-titled YouTube channel. The channel has millions of subscribers, wherein he posts videos related to Roblox and Minecraft. His video series Roblox Prince is immensely famous among his viewers and followers. He is very famous on TikTok and Instagram with thousands of followers. 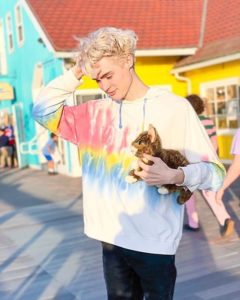 Zachary Zaxor was born to Zachary Todd on August 13, 1998. He belongs to Sarasota, Florida, US. The young man was brought up in Florida. In 2014, he decided to create his YouTube channel at the age of 15. His first video was Minecraft Sky Wars: Episode 1. Zachary’s gaming skills were prominent and influenced him to upload gaming videos on YouTube.

As a result, he attracted several viewers. Some of his videos like ‘Nobody Knew He was a Prince’, ‘I Didn’t Know my Roommate was a Prince’ ‘I Snuck out with my Crush’ got millions of views across the globe. His YouTube channel currently has 3 million subscribers. He is also popular on Instagram with 320K followers and also posts interesting videos on TikTok. Zachary also sells his merchandise on Amazon and SportShirtam.

He is believed to be dating InquisitorMaster, a fellow YouTuber since 2017. She is also a well known YouTuber. Her real name is Alex Einstein.