“A mash-up of personal vlog and ‘unboxing’ video, a blend of harmless childish pranks and persistent, often overpowering commercialization,” according to The Verge. According to Forbes, Kaji was the seventh highest-paid YouTuber in 2016 and 2017, earning $11 million; in 2018 and 2019, he was the highest-paid YouTuber, earning $22 million and $26 million from his videos and product line, respectively. 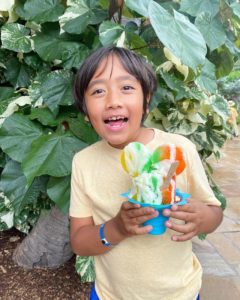 After observing other item review channels and asking his mother, “How come I’m not on YouTube like all the other kids?” Kaji began filming YouTube videos in March 2015. Kaji’s mother abandoned her job as a high school chemistry teacher to devote her full time to the YouTube channel.

The family changed their real-life surname (Guan) to the on-screen surname Kaji before going live on YouTube.

Kaji’s parents inked an agreement with PocketWatch in 2017, a startup children’s media firm formed by Chris Williams and Albie Hecht in 2016. Ryan’s YouTube channels are marketed and merchandised by PocketWatch. In 2018, Ryan ToysReview, in collaboration with PocketWatch and WildWorks, released Tag with Ryan, an infinite runner game for iOS and Android that is aimed for youngsters. Ryan ToysReview and PocketWatch collaborated on a 20-episode preschool television series called Ryan’s Mystery Playdate in 2019.  Outright Games launched Race with Ryan, a racing game starring Kaji and characters from the Ryan’s World franchise, for PlayStation 4, Xbox One, Nintendo Switch, and Microsoft Windows on November 1, 2019.

The channel has announced that on November 27, 2020, Amazon Kids+ will broadcast Super Spy Ryan, a mix live-action and animated series. Ryan’s World will debut an official game on the gaming platform Roblox on December 4, 2020, it was announced.

Kaji has had an impact on the toy industry; his toy reviews, particularly those with millions of views, can have an impact on toy sales. Kaji has been compared to Nickelodeon’s SpongeBob SquarePants by Chris Williams of PocketWatch.

For the third year in a row, a nine-year-old kid has earned nearly $30 million from “unboxing” and reviewing toys and games on YouTube, earning him the distinction of highest-paid YouTuber.

Ryan Kaji, a Texas native, earned $29.5 million (£22 million) with his YouTube channel Ryan’s World, as well as an estimated $200 million selling Ryan’s World-branded toys and clothes, such as Marks & Spencer pyjamas. He also inked an unknown, but certainly multimillion-dollar agreement with Nickelodeon for his own TV show.

Kaji, a “child influencer,” started making YouTube videos in March 2015 after viewing other item review channels and asked his mother, “How come I’m not on YouTube like all the other kids?”

His family currently runs nine YouTube channels after changing their real surname, Guan, to his on-screen surname, Kaji. With 41.7 million subscribers and 12.2 billion views, Ryan’s World was the most popular. Huge Eggs Surprise Toys Challenge, Kaji’s most popular video, has over 2 billion views, making it one of the top 60 most-viewed videos on YouTube.

Kaji and his family, on the other hand, are now facing a US Federal Trade Commission inquiry over suspicions that the sponsors of films are not properly disclosed. According to a complaint filed by the consumer watchdog Truth In Advertising, “almost 9% of the Ryan ToysReview videos have included at least one paid product suggestion intended at preschoolers, a demographic too young to distinguish between a commercial and a review.” “Unhealthy foods are frequently depicted in these advertising.”

Kaji unveiled a Ryan’s World toy collection in collaboration with PocketWatch and Bonkers Toys at the Toy Fair 2018 in New York City. On August 6, 2018, the toys were introduced exclusively at Walmart.

Forbes named the Ryan’s World channel as the highest-earning YouTube channel in 2018 and 2019. The majority of the items reviewed are eventually donated to charity, according to the channel’s description. “Ryan doesn’t keep all the toys he gets,” his mother told Tubefilter, “we give a lot of them away to friends and family, and also a lot of them given to charity.”

Other children could be “targeted by kid influencers in ways that parents may not be cognizant of or aware of,” according to Benjamin Burroughs, an assistant professor of journalism and media studies at the University of Nevada, Las Vegas, who examines emerging and social media trends.
“As a child influencer, companies are courting [Ryan] to play with the latest product so that other kids can see it.” “However, the child influencer has now evolved into a brand that is being integrated into Walmart, Target, and Amazon as its own force and influence,” Burroughs explained. “It’s a bit of a shock.”

Burroughs grew interested in the child influencer phenomena after his own children requested that he imitate what Ryan’s family was doing. “I thought to myself, ‘There must be something going on here if my kids expect our family to look like Ryan’s.’ Ryan’s family has access to a steady stream of entertainment and items. Every day, they unwrap a new toy and then play with it, so there’s this ongoing consumerism entrenched inside these messages for children.”

According to Forbes magazine’s research of their expected earnings between June 2019 and June 2020, the top 10 highest-earning YouTube stars took home a total of $211 million.
Second place went to Jimmy Donaldson, aka Mr Beast, who made an estimated $24 million and was a newcomer to the YouTube wealthy list.

Donaldson, 22, is known for performing daredevil exploits such as freezing himself in ice and giving out large sums of money to people who compete in his challenges. He also generates money through item sales and collaborations with companies like Microsoft and Electronic Arts.

“The concepts are going to grow crazier, and he’s going to continue to spend significant sums of money to raise the production quality,” Donaldson’s manager, Reed Duchscher, said. He just tweeted today that he had all these great ideas that will cost $10 million. And he is correct. He fulfils this need.”

Who is Talia Mar? Everything to know about Simon Minter’s fiancee as Sidemen star gets engaged

Who is the father of Malvika Sitlani? Discussion about Her Parents’ Divorce on Reddit

What Religion Follows Courtney Budzyn? Everything Depends On Owner Faith And Beliefs In Tucker Budzyn

Faze Swagg Announces Break Up With His Girlfriend Maria On Twitter, What Happened Between Them?

What Is Colin Furze Net Worth In 2022? How Much Has He Made From His Youtube

Has Gawr Gura Done A Face Reveal- Who Is She?