Paul Pelosi, the husband of House Speaker Nancy Pelosi, was detained in Napa County, California, on Saturday night for reportedly driving while intoxicated. The 82-year-old was taken into custody at 11:44 p.m. PT on Saturday and booked at 4 a.m. on Sunday. According to the Napa County Criminal Justice Network’s records, Paul was charged with misdemeanors for allegedly driving with a blood alcohol concentration of 0.08 percent or greater. 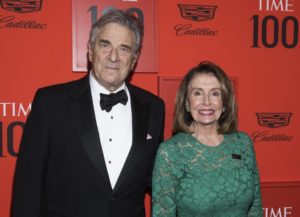 Why was Paul Pelosi Husband arrested?

According to the records, Paul’s bail was set at $5,000 and he was released on Sunday morning. According to Pelosi’s office, she was not in California when her husband was arrested. She was in Rhode Island receiving an honorary degree from Brown University and giving the commencement address to the graduating class.

Drew Hammill, the House speaker’s spokesperson, stated, “The Speaker will not be commenting on this private situation that occurred while she was on the East Coast.”

Nancy Pelosi wasn’t with husband when he was booked

The blood alcohol content level of Paul Pelosi’s breath alcohol test was 0.08 or above (Source: Napa County Criminal Justice Network)
Last July, the Pelosis were in the spotlight for their highly profitable transactions, particularly Paul’s. Paul’s trading actions made headlines when he made $5.3 million by executing call options that allowed him to purchase 4,000 shares of Alphabet, Google’s parent company, and he also invested between $100,001 and $250,000 in Disney.

The transaction was fraught with controversy. That’s because it happened right before the House Judiciary Committee was set to vote on antitrust legislation, which wasn’t considered as posing a significant danger to the tech giants in the end. Nancy opposed a restriction on parliamentarians investing in the stock market, and her husband, Paul Pelosi, immediately purchased shares worth millions. Speaker Pelosi’s spokesperson said at the time that she was unaware of the acquisitions and that she does not own any stock.

Paul’s detention has elicited no response from Pelosi or their children. Paul has been married to Nancy, a San Francisco native, since 1963. They have a total of five children together.

Paul is said to be a wealthy individual. His net worth is estimated to be in the $120 million range, and he runs Financial Leasing Services, Inc, a real estate and venture capital investment and consulting organization.

‘Loot’: All about the Apple TV+ comedy series