This article will provide information about Venkatesh family and photos of Actor Venkatesh, as well as the Venkatesh Daggubati Family Tree.

Venkatesh (also known as Daggubati Venkatesh) is an actor and producer who has been a part of Telugu Cinema for more than 20 years. Venkatesh, an actor, was born to producer D. Ramanaidu (and Smt. Rajeshwari in Chennai, Tamil Nadu. Other than Venkatesh the actor, there are many other members of the Daggubati clan that are also involved in Telugu cinema in different fields. 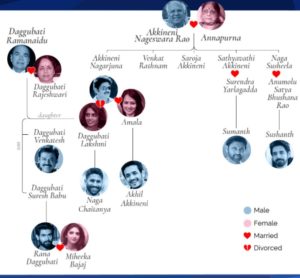 D. Suresh Babu, his brother, is also a prominent producer in the Telugu film industry. Daggubati Venkatesh initially wanted to be a producer, but fate made him an actor. He is now a star in Telugu cinema. He was an actor and received the highest number of Nandi awards for his roles in different movies. We will also provide details about Daggubati Venkatesh family tree, Actor Venkatesh’s journey, and Venkatesh’s family.

The Akkineni/Daggubati clan is linked through Nagarjuna’s union to D Ramanaidu’s daughter Lakshmi. This makes them one large clan with more than 80 years of presence at Telugu cinema. The film career of the family began with Akkineni Naageswara Rao who is one of the most important figures in Indian cinema’s history. D Ramanaidu, the father of the Telugu film Nammina Bantu (1958), which starred Akkineni Naageswara Rao & Savitri, began the professional relationship between the two families. Lets look more into the vast Venkatesh Daggubati Family Tree.

Both families continue to support the film industry with stars and filmmakers such as Suresh Babu and Venkatesh, and Rana Daggubati. Let’s take a look at this filmi family.

Akkineni Naageswara Rao This Akkineni patriarch is also known as ANR. He starred in and produced many iconic films over his 75-year career. Along with N. T. Rama Rao, he is one of the two pillars in Telugu Cinema. ANR is also well-known for his groundbreaking work in biographical films. His fans affectionately call him Natasamrat. His performances in romantic dramas such as Laila Majnu (1949), Devadasu (533) and others are also well-remembered. Rao also appeared in blockbusters Ardhangi (1955), Donga Ramudu (1955) and Mangalya Balam (588) respectively. Rao was instrumental in the transition of the Telugu cinema industry to Hyderabad in the 1960s. In 1975, he founded Annapurna Studios to provide support for the Telugu film sector.

Rao wed Annapurna in February 1949. Annapurna Studios was named after him. They had five children together – Nagarjuna and Venkat Rathnam, Saroja and Sathyavathi, as well as Naga Susheela.

D Ramanaidu : He started Suresh Productions and produced the smash hit movie Ramudu Bheemudu (1964). He produced Prem Nagar in 1971. It starred Akkineni Naageswara Rao, Vanisri and was a huge success. He made films in Tamil and Telugu, but he also began to work in other languages. His Hindi films include Dildaar and Tohfa, Anari Hum Aapke Dil Mein Rehte Haiin, Aaghaaz, Hum Aapke Dil Mein Rehte hain, and Anari. Ramanaidu was the father of two sons, and one daughter. His older son Daggubati Sureshbabu is a producer, while his younger son Daggubati Venkatesh plays an actor in Telugu cinema. Eight grandchildren were his. Two of them, Rana Daggubati (producer) and Naga Chaitanya (actress in Telugu cinema).

Akkinneni Nagarjuna This actor-producer appeared in more than 100 films, mainly in Telugu. There have also been a few Tamil and Hindi films. He began his career as a child actor in 1967’s Telugu movie Sudigundalu. In 1986, he became a leading actor in the Telugu film Vikram. Aakhari Poratam (1988), Geetanjali and Shiva are among his blockbuster films. The remake of Shiva was his Bollywood debut in 1990. Nagarjuna also has hits like Killer, Neti Sildhartha and Nirnayam. Many of his films were remade in Hindi. He also appeared in romantic comedies like Manmadhudu and Santosham. He is also a prominent television host, hosting the third and fourth seasons Bigg Boss Telugu.

He married Lakshmi Daggubati in February 1984. She was the daughter of D. Ramanaidu. Nagarjuna and Lakshmi have one child, actor Naga Chaitanya. In 1990, the couple divorced and Nagarjuna was married to actress Amala in June 1992. Actor Akhil Akkineni is the actor.

Daggubati Venkatesh With a long career that spans over 30 years, Venkatesh is a star who has been involved in many films like Chanti, Preminchukundam Raa and Premante Idera. His career turned around after the 1990 film Bobbili Raja was a commercial success. Venkatesh’s debut in Hindi cinema was made with Anari (1993), a remake of Chanti. Later, he was also in Taqdeerwala (1995). Venkatesh and Neeraja were married in 1985. They have four children, three daughters and one boy.

Daggubati Sureshbabu: He produced many Telugu-language films, including Coolie No.1, Preminchukundam Raa and Ganesh. He is married to Lakshmi. They have three children, actor Rana Daggubati Malavika Daggubati und Abhiram Daggubati.

Naga Chaitanya was Nagarjuna’s older son. He made his debut with Josh in 2009 and then starred in Ye Maaya Chesave (2010), a remake Tamil film of Vinnaithandi Varuvaya. After that, he was cast in films like 100% Love (2011) and Manam (2014). He also starred in Premam (2016), Sahasam Swasaga Sagipo (2016). He later starred as the lead in Rarandoi Veduka Chhadham (2017), Majili (2017), Venky Mama (2009). He is married to Samantha Ruth Prabhu, an actress. They make up one of the most loved Tollywood couples, affectionately called ChaySam.

Rana Daggubati was Sureshbabu’s son. He started his career in the film industry as a visual effects coordinator for around 70 films. Spirit Media, his production company, was founded before he became an actor. Rana’s Telugu debut film, Leader, was one of his greatest successes. His Bollywood debut was with Dum Maaro Dum (2011). He is one of the most well-known south actors who has appeared in Hindi films many times. His greatest success is the role of Bhallaladeva, in the Baahubali series. In August 2020, he married Mihika Bajaj.