In 1971, General Idi Amin overthrew Milton Obote’s democratically elected government and declared himself president of Uganda. This marked the beginning of an eight-year horrific regime that saw an estimated 300,000 civilians killed.

His expulsion of all Indian and Pakistani citizens in 1972, coupled with growing military spending, contributed to the country’s protracted economic decline.

Amin was had to flee when exiled Tanzanian and Ugandan citizens took control of Kampala, the nation’s capital, in 1979, putting an end to his reign of terror.

He also lived for the rest of his days in Saudi Arabia without ever facing charges for his horrible deeds. 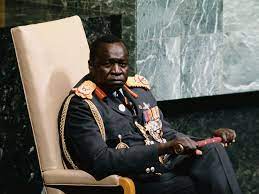 In the King Faisal Specialist Hospital and Research Centre in Jeddah, Saudi Arabia, Idi Amin was in kidney failure and on the verge of passing away.

His fourth wife, Nalongo Madina, begged Ugandan President Yoweri Museveni to allow him to spend the remainder of his days in his country.

Museveni responded that Amin will have to “answer for his faults once being brought back.”

Unfortunately, Amin’s family ultimately decided to turn off life support, and he passed away on August 16, 2003, at the hospital in Jeddah. He was quietly laid to rest in the Ruwais Cemetery in Jeddah.

Idi Amin’s Northwestern Uganda Family and Religion, according to Wikipedia

Amin was the son of a Roman Catholic who converted to Islam in 1910 and was born in Koboko to a Kakwa father and Lugbara mother.

Amin was allegedly the son of Andreas Nyabire (1889–1966), a Kakwa ethnic group member who adopted the name Amin Dada, according to a researcher at Makerere University.

Similar to how he was abandoned by his father when he was a little child, he was reared in a rural farming hamlet in northwestern Uganda with his mother’s family.

Amin’s mother was Assa Aatte (1904–1970), a traditional herbalist who, among other things, treated individuals like Buganda nobles. She was of the ethnic Lugbara people, therefore he had a mixture of Kakwa and Nubian ancestry.

Idi Amin, a former president of Uganda, fathered about 60 children.

In the end, it is impossible to determine Amin’s exact number of children, while the majority of sources indicate that he had 30 to 45.

Even though Amin allowed up to 46 children in his will, his tenth son Jaffar Amin Remo asserts that there are actually 60 children. The majority of his descendants continue to reside abroad.

But according to Jaffar, his father was so devoted to his family because he loved them so much that he spent all of his free time teaching them values and how to swim.

In charge of managing Idi Amin’s estates is his oldest son Taban Amin, who was born in 1955, and his sister Maimuna Amin.

The son of Amin and Sarah, Faisal Wangita, was born in 1981 and was convicted of taking part in a homicide on August 3, 2007, in London.

Moses Amin, about whom many people believed he had been eaten by his father Amin, who is still alive today, has debunked the idea that Amin was a cannibal.

At least six spouses were married to the former president Amin, three of whom he divorced. His first and second wives, Malyamu and Kay, were united in marriage in 1966. In 1967 he wed Nora, then in 1972 he wed Nalongo Madina.

On March 26, 1974, Amin officially proclaimed on Radio Uganda that he had split up with Malyamu, Nora, and Kay because they had supposedly organized a party without telling the egotistical man about it.

A few months later, in April 1974, Malyamu was arrested in Tororo, close to the border between Kenya and Uganda, and accused with trying to smuggle rolls of fabric into Kenya. Nora escaped capture and went to Zaire in 1979; it is unknown where she is right now.

Nevertheless, in July 1975, at a £2 million wedding ceremony, Amin, a guy who lived for pleasure, wed Sarah Kyolaba, a go-go dancer with the Revolutionary Suicide Mechanized Regiment Band.

In addition, according to Monitor, he is claimed to have wed a couple more spouses before passing away in 2003.