Imagine living your life as a woman in a man’s body. It may seem impossible, yet this trans-woman from Karnataka has overcome all barriers. She has not only had to cope with her own personal struggle, as well as rejection from society and family at first, but she has also had to deal with slurs such as ‘faggot’ and others. But, despite her challenges, she has joined the ranks of transgender women who are making waves. Meet Trinetra Haldar Gummaraju, a 23-year-old transwoman who is currently interning at the Kasturba Medical Hospital in Manipal after completing her MBBS exams. 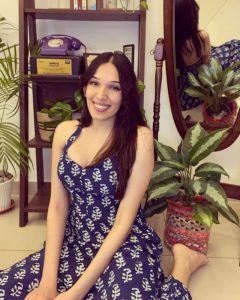 She received the title of Karnataka’s first trans-woman doctor after completing her MBBS. Trinetra was born as Angad Gummaraju to Bengaluru-based parents and underwent gender confirmation surgery (GCS) abroad in February this year. She is a student at a private medical institution in coastal Karnataka.

Dr. Trinetra Haldar Gummaraju (born June 17, 1997) is an Indian LGBTQ+ activist, medical intern, actress, and content producer. On Instagram, where she has a significant following, she is well-known for discussing transgender rights, political concerns, feminism, and intersectionality. She was a pioneer in the Indian entertainment industry as one of the first openly transgender Indian content makers. She is also the first openly transgender doctor in Karnataka. Her work frequently incorporates her experiences negotiating a conservative and predominantly transphobic society and career. She gained notoriety in 2018 and 2019 after beginning to document her medical, legal, and social transitions on Instagram and YouTube. She has received a lot of trolling and abuse because of her gender identification and political ideas.

Trinetra is also a well-known YouTuber who has chronicled her transition on her channel, ‘The Trinetra Method.’ She has a sizable social media following, but she has been subjected to a barrage of online insults and slurs on a regular basis. She did, however, just publish an encouraging message about her life storey.