Tony Lopez is a popular social media influencer and a TikTok star, hailing from United States. Ondreas Lopez, a fanous dancer and social media star is his twin brother. He is famous for his YouTube channel “Lopez Brothers” where they post challenging and dancing videos earning a large number of views and likes. Both the brothers are members of a TikTok group “Hype House” which was created in 2019, aiming at collecting a number of big names together on the app to generate content and increase their fan base. 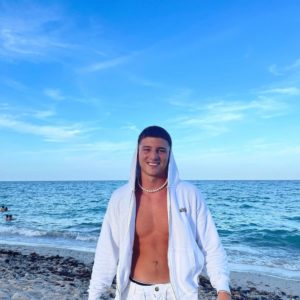 Tony Lopez was born on August 19, 1999 in an upper-middle-class Christian family in Las Vegas, Nevada, in the United States. He got his education from Lawrence Junior High School in Las Vegas and grew up in Springfield Gardens. After that he did his diploma from a local private institution. Tony and his brother started their YouTube career at an age of 12 years after being inspired by their peers and classmates to showcase their dancing ability but soon developed passion for acting and modelling and decided to pursue a career in the same industry.

Tony Lopez was born in Las Vegas, Nevada, on August 19, 1999. Tony is a brother to Ondreaz, and they form “The Lopez Brothers” YouTube channel. He also has a brother, Xavier. The brothers were well-known for their dancing skills at school functions and pep rallies in high school. They have been dancing for many years.
Tony has over 448,600 followers on Twitter, 7.1 million Instagram fans, and 22.5million TikTok followers as of August 2021. His YouTube channel, which he shares with his brother, the Lopez Brothers, has over 1.66 million subscribers.
Tony rose to fame first on TikTok’s video sharing platform. He has been one of the most popular users on TikTok since joining. Tony and his brother are both well-known on TikTok. However, his brother has many more followers than Tony. Both brothers appear in each other’s videos frequently.
Tony and Ondreaz, his brother, are both members of the TikTok collective Hype House. Hype House is a place where TikTok’s brightest stars work together and create content. The house was established in December 2019 to allow principals to share their content and grow their followers. The Hype House supports members such as Chase Hudson and Avani Gregg.
Tony and Ondreaz both live at the Hype House in Los Angeles. However, when they’re not there, they stay at home in Las Vegas.
The star hosted a Las Vegas Dance Workshop in 2019, his hometown.
Tony also runs a TikTok account with his brother. There they share a variety of videos, including comedy videos and challenge videos. Tony has been subject to some criticism.

Some Facts About Tony Lopez

He is known for his dimpled chin, prominent almond shaped dark brown eyes and rectangular face. Having black colored hair with curls on top make his stylish look more attractive. He is clean shaved as that of his brother. He is a fitness freak. He wears two gold necklaces.

His mother is a country girl and father, a dancer. He has two brothers.

As of 2021, Tony Lopez’s net worth is $7 million approximately. He mainly earns through his TikTok account, YouTube channel, and also through sponsorships and advertisements on his different social media handles. He owns a clothing company and is a brand ambassador of the same which sells shirts and other items.