After being resurrected into an aristocratic family, Cid continues to lead the life of a vigilante in the second episode of “The Eminence in Shadow,” which is titled “Shadow Garden Is Born.” Following his victory over the bandits, he cures a girl who was under a curse and convinces her that she is a hero’s descendant who is obligated to battle against the Cult of Diabolos. During this time, Cid’s sister Claire is abducted right before she was scheduled to leave for the royal capital so that she can continue her study there. The following provides detailed information regarding the conclusion of the second episode of “The Eminence in Shadow.” 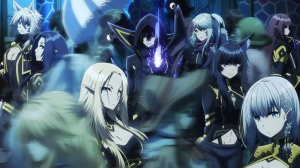 The Eminence in Shadow Episode 2 Recap

Minoru Kagenou is astonished to discover that he has been resurrected as Cid Kagenou in a parallel universe after his death in a car accident. When compared to his life in the past, the one he leads now as a member of the aristocratic family is quite different. Cid, on the other hand, makes the decision to carry on with his life as a vigilante, though he will train in private and appear to be a normal person to the outside world. As a consequence of this, when he is an adult, people will eventually consider his older sister Claire to be the legitimate heiress of the Kagenou family.

During this time, Cid is engaged in covert combat against bandits. During one of his nocturnal missions, he comes across a live glob of putrefying flesh. He realizes that someone is under a curse, and in order to save that person’s life, he conducts a series of tests over the course of a few days. He is eventually successful in curing the rotting flesh, which results in the transformation of the creature into a lovely elfin maiden. Cid sees this as an opening and uses it to his advantage to control her. After giving her the name Alpha, he tells her a lie that she is truly a descendant of ancient heroes who once fought bravely against the monster Diabolos. He says this after he has already given her the name Alpha.

Cid continues by asserting that Diabolos’ cult is currently plotting to resurrect him and that she must take action to prevent this from occurring. Alpha ends up believing what he says, and as a result, he establishes a resistance movement known as Shadow Garden to combat the cult. After waiting for three years, she finally manages to recruit some people, and they decide to call themselves the Shadow Seven as a group. During this time, Cid is still working on his skills with his sister Claire, although he has never been able to best her.

It is expected of the aristocrats that once they reach the age of fifteen, they will enroll in the Midgar Academy of Dark Knights located in the royal capital. Additionally, Claire has registered there, and she is getting set to relocate there in order to pursue her formal education. Unfortuitously, on the day that she was supposed to go for the royal capital, Claire mysteriously vanishes from her room without leaving behind any sign.

It won’t be long until everyone finds out that she’s been taken captive. While Cid’s father is stunned that someone was able to fight against Cid’s mother, Cid’s mother is outraged and gets into an argument with his father about the lack of safety precautions. Meanwhile, Cid’s father is angry that someone was able to fight against her. Cid, on the other hand, isn’t too concerned about the situation and goes to consult with Beta, a member of the Shadow Seven, on how they should go about looking for her.

The Eminence in Shadow Episode 2 Ending: Does Shadow Seven And Cid Save Claire From Kidnappers?

Beta, having first gained an awareness of the situation, has finally caught up with Cid in order to talk about the next steps they want to take. Beta informs Cid that a high-ranking officer of the Cult of Diabolos is engaged in the kidnapping, despite the fact that Cid is certain that bandits are responsible for the kidnapping. She claims that they kidnapped Claire because they think she is a descendent of one of the heroes, and that is the reason they stole her. The next thing that happens is that Beta hands Cid a map and proceeds to point out all of the likely hiding places where his sister has been kidnapped.

Cid believes that their original speculations are incorrect, so he throws a knife on the map to indicate where they should seek for the treasure. However, he mistakenly misses the target he was intending to hit. To Beta’s astonishment, Beta is ecstatic, and he believes that Cid just hit the nail on the head by pointing in the direction in which they were not even looking. Beta’s reaction took him by surprise. In a short amount of time following this gathering, the Seven Shadows led an unexpected assault on the hiding place.

While everything is going on, Claire is being questioned by Viscount Grease, a high-ranking officer of the Cult of Diabolos. When he starts talking about her brother, Claire breaks free from her chains and makes a run at him, only to be thrown down a few moments later. One of his comrades unexpectedly shows up with the news that the Seven Shadows have launched an assault on the hideout. In spite of the fact that Viscount is under the impression that his troops possess the necessary strength to be part of the Royal Guard, those soldiers are currently perishing at an alarming rate in front of their adversaries.

When Viscount is approached by Alpha and her followers, he engages in combat for a period of time and then makes attempts to escape. Unfortunately for him, he winds up coming into contact with Cid, who makes fun of his fighting skills before coldly taking his life without showing any remorse. After freeing herself from her bonds, Claire makes her way back to her house the following day. Her wounds are not life-threatening, and she recovers quickly enough to continue on her journey to the royal capital. 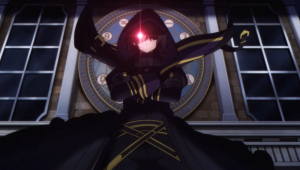 The Eminence in Shadow Episode 2

The Eminence in Shadow (Kage no Jitsuryokusha ni Naritakute!) is a series of light novels written in Japanese and illustrated by Tzai. The series was written by Daisuke Aizawa. In May of 2018, it was made available for reading in installments on the user-generated novel publishing website Setsuka ni Nar. Later on, Enterbrain purchased the company, and they’ve been publishing the series ever since November of 2018.

Since December 2018, the seinen manga magazine Comp Ace published by Kadokawa Shoten has been running a serialization of a manga version of the story, with art by Anri Sakano. A spin-off manga by Seta U titled Kage no Jitsuryokusha ni Naritakute! Since July 2019, Shadow Gaiden, also known as “The Eminence in Shadow! Shadow Side Story,” has been available to read in serial form on Comp Ace. This information has been compiled into three tankbon volumes. Yen Press has obtained licenses to publish both the main manga and the accompanying light novel in North America. In October of 2022, the opening episode of Nexus’s anime television series adaption aired.

A young man in modern-day Japan has the ambition to become a mastermind who exercises power from the shadows. However, as he is practicing to achieve this goal, he is struck and killed by a truck. He then reincarnates in a fantasy realm under the name Cid Kagenou, where he keeps a perfectly average appearance so as not to draw attention to himself and instead pursues his desire of exercising power covertly. One day, he happens upon an elf girl who is suffering from a strange illness, and he is able to treat her and save her life. Cid concocts a tale in which he explains that this planet is being controlled insidiously by the Cult of Diabolos and that his shadowy organization, Shadow Garden, is the only one capable of battling against them. The elf girl, who we now know as Alpha, becomes a member of this group and immediately proceeds to seek out additional recruits. However, Cid’s claims are based on real events, but he is under the impression that everything he has spoken is a complete fabrication. Under the guise of Shadow, Cid continues to wage war against the Cult of Diabolos, wholly oblivious to the fact that he is embroiled in a complex political conflict.

Is the Netflix’s The Watcher Based on a True Story?