Sumner Stroh: Who Is She? Meet The Woman Claiming To Have Dated Adam Levine

Sumner Stroh claims that she dated Adam Levine for a year when he was still with Behati Prinslo in a video that she uploaded on Tiktok and shared with her followers.

Adam Levine is an American singer, songwriter, and musician. He is best known for his role as lead vocalist and rhythm guitarist for the pop rock band Maroon 5.

1994 marked the beginning of Levine’s career as a musician when he began performing with the band Kara’s Flowers, in which he held the lead guitarist and vocalist positions.

After the commercial failure of their one and only album, The Fourth World, the band was reformed in 2001 under the name Maroon 5, with James Valentine taking the place of Adam Levine as the band’s main guitarist.

Let’s dig deeper into the recent rumor that Adam was having an affair with Sumner when he was still married to Behati so we can get to the bottom of this. 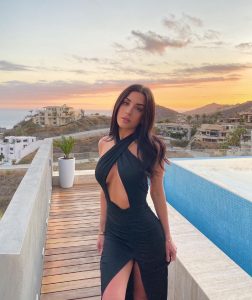 Who Is Sumner Stroh? Is Adam Levine Dating Her?

Sumner Stroh is an Instagram model. She just recently uploaded a video to Tiktok that is quickly gaining popularity all around the world. In the video, she makes the assertion that when she was 19 years old, she was in a relationship with Adam Levine, the lead singer of Maroon 5, and that they dated.

She uploaded the video to her Instagram account with the remark, “embarrassed I was connected with a man (Adam) with this absolute lack of remorse and respect.”

In addition to that, she showed a few screenshots of the conversations that had taken place between the two of them. During those conversations, Adam sent a text message that read, “it is truly unreal how hot you are.”

In addition, she went on to say that they dated for a whole year. Despite this, she stopped seeing him at some point in the future.

In the video that went viral, several users expressed their indignation towards Adam and voiced their support for Sumner. One of the users penned in the following: “It is common knowledge that he has been married for the past ten years. His wife and children are the only ones who have been hurt by this.”

A similar sentiment was expressed by a different user, who said, “Messed up situation, but there is accountability that needs to be held on all sides.”

One of the users made the following comment: “Also, doesn’t he want to name his child after the woman he’s been having an affair with? LIKE HOW MUCH MORE DISRESPECTFUL TO YOUR WIFE CAN YOU BE.”

Adam Levine and Behati Prinsloo are a match made in Victoria’s Secret heaven. From their passionate beginnings to getting married and having children, the couple is a match made in heaven.

Even though the artist and the Namibian model had a brief breakup in May of 2013, they were unable to shake the feeling that there was something between them. Less than two months later, they got back together and began dating.

One year later, they tied the knot in front of 275 family members and friends in Los Cabos, Mexico, as reported by People. It was said that the wedding in 2014 had a country feel to it and that it was held in the picturesque Flora Farms.

After some time, they became parents to two little ones: Gio Grace and Dusty Rose. According to a number of different stories, the couple is reportedly expecting their third child. After some time had passed, Prinsloo confirmed the news by posting an image of her expanding belly on social media.

According to Sumner, Adam finally texted her after this pattern continued for months “Ok serious question. I’m pregnant with my second child, and if it turns out to be a boy, I really want to call him Sumner. Are you comfortable with that?” Being “dead” serious Following the encounter with the book, Sumner had the impression that her “moral was entirely compromised.”

She had the impression that being an Instagram model was associated with a certain set of preconceived notions. After reading his text conversations, she was left feeling absolutely embarrassed and ashamed of herself.

She was not receiving enough attention despite posting numerous videos and photos on various social media sites. But after she posted a picture of herself before her alma mater’s football team’s game against Alabama wearing a rolled-up Texas Longhorns jersey and bikini bottoms, things took a turn for the worse. When some sports websites posted it online, it quickly became popular.

As the marketing manager for her jewellery company, Strung by Stroh, Stroh also collaborated with her sister Baylen Stroh.

She also assisted in the promotion of numerous online magazines, small businesses, and a sports team.

Net Worth of Sumner Stroh

Sumner Stroh’s net worth, based on the data we gathered from the sources, is less than $1 million USD.

On social media, Sumner Stroh posted a photo, but she hasn’t provided many details about her family. Her mother’s name is Tracey Ann Stroh, and she has three siblings, according to our sources.

Her older sister, Baylen Stroh, and two younger brothers, Asher and Brandon, are both mentioned earlier in this article.

Sumner Stroh Age: How Old Is She?

It would indicate that Sumner Stroh is in her 20s. However, she has not been specific about how old she is. According to her Instagram bio, she graduated from the University of Texas.

On Instagram, Sumner has amassed a huge number of followers. The majority of the pictures she publishes are from her photoshoots, in which she displays her perfect body. As at the time this article was written, she had amassed more than 336 thousand followers there.

Her Tiktok account has over 296 thousand followers and 2.7 million likes combined. Within the first hour, her video about Adam had more than 71,000 views, surpassing the previous record.

Before getting married to Behati, Levine was in a relationship with Anne Vyalitsyna, a Russian model who has appeared on the cover of Sports Illustrated Swimsuit. They first connected in the beginning of 2010 while she was performing at a Las Vegas release party for the magazine.

They started going out on dates together. In April of 2012, they announced their decision to end their relationship in a “amicable and supportive manner.”

Read More: Sabrina Soto of Secret Celebrity Renovation who is she? Return of the interior designer to the CBS refurbishment program

Who Is Lindsay Arnold? Where Is She Now? Did She Leave Dancing With The Stars?