Sukmawati Sukarnoputri, 69, converted into Hinduism in a ritual called ‘Sudhi Wadani’ as the ceremony happened at the Sukarno Centre Heritage Area in Bali’s Buleleng Regency.

The main religion followed in Bali is Hinduism, however, it is different from the Hindu religion practised in India. Sukmawati’s grandmother Ida Ayu Nyoman Rai Srimben, who is Balinese, played a major role in influencing the 69-year-old’s decision to convert to Hinduism.

Sukmawati’s lawyer, while informing about Sukmawati’s decision, said that the 69-year-old has extensive knowledge of all rituals of Hindu theology as well as doctrines.

A friend of Sukmawati’s, who told the South China Morning Post that her relatives gave their blessings for the conversion, said that process was a “demonstration of courage”. The friend said that the conversion demonstrates a shining example of the Sukarno family’s “religious tolerance”. 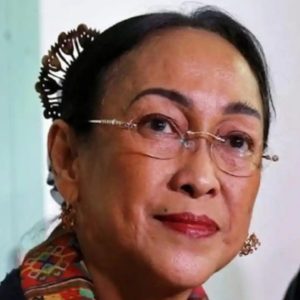 The 69-year-old had been interested in the Hindu religion for the last 20 years and has read the Ramayana and the Mahabharata, the two great Indian epics, the friend said.

Sukmawati’s parents played a major role in the independence of Indonesia from the Dutch and Sukarno, her father, became the first president of the nation after Indonesia was declared independent in 1945. He served for 22 years and was deposed in 1967.

In 2018, the 69-year-old had called herself a “proud Muslim” after she was accused of blasphemy for reciting a poem at a fashion event that purportedly insulted the hijab and call to prayer.

Sukmawati attended elementary and junior high school at Sekolah Rakyat Cikini in Jakarta, graduating in 1967. In 1969, she graduated from State Senior High School 3 Teladan. She attended the Dance Academy of the Jakarta Arts Education Institute (LPKJ) from 1970-1974. In 2003, she enrolled in international relations at Jakarta’s Bung Karno University.

In 1998, following the fall of Suharto, she revived the Indonesian National Party (PNI), which was renamed PNI Supeni and competed in Indonesia’s 1999 general election, winning only 0.36% of the vote. Being ineligible to contest future elections because of its poor performance, the party changed its name to PNI Marhaenisme in 2002 and Sukmawati was appointed chairwoman. The party received 0.81% of votes in the 2004 general election, winning just one seat in parliament. In the 2009 election, the party won just 0.3% and lost its only seat.

The Election Supervisory Board (Bawaslu) reported Sukmawati to the National Police in July 2009, alleging she had falsified her high school diploma when registering as a legislative candidate for the Marhaenism Indonesian National Party. Police in August dropped the case, saying there was a lack of evidence as the school’s records had been destroyed by a fire in 2007.

In 2011, Sukmawati wrote a memoir about the 15 years she lived at the Merdeka Palace, called Creeping Coup d’Etat Mayjen Suharto (The Creeping Coup d’Etat of Major General Suharto). She believes Suharto and other members of the military conducted a coup against Sukarno by using the Order of March 11, 1966. She said she cannot forgive Suharto for human rights violations that occurred in the aftermath of the coup.

In October 2016, Sukmawati filed a police complaint against radical Muslim cleric Rizieq Shihab, accusing him of insulting Sukarno and Indonesian state ideology Pancasila. Rizieq had allegedly made a speech stating “in Sukarno’s Pancasila, God is placed in the ass, whereas according to the Jakarta Charter, God is in the head”. The Jakarta Charter was a proposed preamble to Indonesia’s 1945 Constitution that would have required Muslims to follow Shariah law. Police declared Rizieq a suspect in January 2017. He fled Indonesia in May 2017 when also named a suspect in a pornography case.

Sukmawati was married to Prince Sujiwa Kusuma (Mangkunegara IX) of the Mangkenegara royal family of Solo, Central Java. They had three children, and later divorced.

On 26 October 2021, she converted from Islam to Hinduism in a “Sudhi Wadani” Hindu ceremony in Bali. She defined the process as going back to her roots and described being influenced by her grandmother who was a Hindu.