The true story told in “Suitcase Killer: The Melanie McGuire Story” is about a man who was found dead and cut up in a suitcase in 2004. The real-life story of Melanie McGuire, who was found guilty of killing her husband in 2004 and sent to prison, is told in the Lifetime movie. 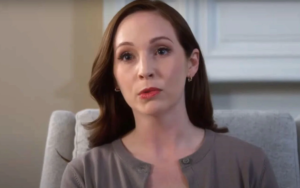 In the movie, Candice King plays McGuire, a great fertility nurse who is married to ex-marine Bill (Michael Roark). She also loves her two boys very much. Melanie does the unthinkable when she falls in love with Brad, a doctor at her clinic who is played by Jackson Hurst, and starts a hot affair with him. After she gives Bill drugs and kills him, she cuts up his body, puts the pieces in three suitcases, and throws them into Chesapeake Bay. When the suitcases are found on Virginia beaches, an investigation is started, and Melanie is the main suspect. With the help of assistant attorney general Patti Prezioso (Wendie Malick), the law eventually catches up with Melanie, who is found guilty but still insists she is innocent.

Even though this is based on real events, the writing is not very good. In the beginning, a woman walking on the beach in the morning finds a suitcase and calls the police. The movie eventually gets to the part where Bill and Melanie meet for the first time. It then shows their whole story, from when they first started dating to the day they got married, when Melanie was pregnant.

Even though this is a murder mystery with a lot of interesting parts, the first half of the book is mostly about sex, romance, and cheating. Melanie goes through every feeling you can think of in the movie, but maybe too quickly. In just a few minutes, Melanie gets married to Bill, and then he cheats on her.

Also, the important scene in the courtroom where Melanie tries to save herself is neither well shown nor told. This is probably the most important part of the story, and it should have been told better and for longer.

But Candice King shines through the mess with a great performance as a woman who will do anything to prove her innocence. As the lawyer, Wendie Malick is a great help and gives a great performance in court. Michael Roark also does a good job as a man who likes to gamble and cheats on his wife whenever he gets the chance.

At the end of the movie, Melanie is found guilty of killing her husband. Throughout the movie, though, you get the impression that she is innocent, which makes the ending a bit of a shock. This movie is great for a one-time viewing, especially if you want to see a real-life murder mystery with a lot of drama.