Indian-born Suella Braverman has been appointed UK Home Secretary in the incoming administration.

Since becoming the UK Home Secretary, the Indian-born Barrister has drawn a lot of attention. Continue to learn more about her. 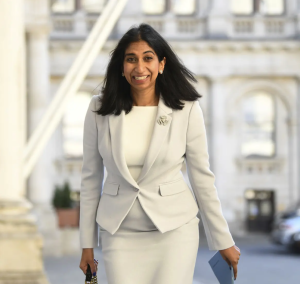 Suella Braverman Has Roots In India

On April 3, 1980, Suella Braverman, also known as Sue-Ellen Cassiana, was born. The 42-year-old is an Indian-British.

In the 1960s, her parents moved from Kenya and Mauritius, respectively, to Great Britain. She was ultimately born in Harrow, London, England, and has spent the majority of her time there.

After she had previously attended a local public school, her parents decided to move her to a nearby independent school. She received a scholarship to help with her tuition there. In the end, she was awarded a scholarship to Queens College in Cambridge to pursue a legal education.

Along with passing the New York bar test to be allowed to practice law in the state of New York, Braverman also finished an LLM in European and French law at the Pantheon-Sorbonne in Paris.

Christie Fernandes, the father of Braverman, is a Goan. He was raised in the Konkan region on India’s southwest coast.

Before moving to London, Fernandes finished his education in Kenya. Of his five Kenyan siblings, he is the oldest. One of his brothers who was employed in Delhi passed away. With their husbands and kids, two of his sisters currently reside in Goa and Cyprus. In a similar vein, one of his brothers is a well-liked priest in the Delhi Archdiocese.

The Times Of India claims that Braverman can trace her father’s lineage back to Sokolwaddo, Assagao, and her grandmother’s roots back to Calangute. She has visited Cyprus and Goa on numerous occasions.

When he immigrated to the UK, Christie Braverman’s father worked for a housing association. He served as an advocate for numerous causes in his neighborhood. He is widely known among Wembley residents for being an activist and an effective speaker.

Christie Fernandes expressed his pride in his daughter’s accomplishments. We are quite proud of her, he stated, as reported in The Times Of India. She has always been a clever girl with great expectations.

Uma Fernandes, the mother of Suella Braverman, was born in a Tamil Mauritian household. She is a politician and a former nurse.

According to Suell’s official website, her mother has worked in the medical field for almost fifty years and was hired by the NHS when she was 18 years old.

Additionally, for approximately 16 years, Braverman’s mother was a councilwoman for Brent. Her mother ran as the Conservative candidate in Tottenham in the 2001 general election as well as the 2003 Brent East by-election.

Suella was motivated to enter politics by her mother.

Braverman Is The Neice Of Former High Commissioner

Mahen Kundasamy’s niece is Suella Braverman. Her uncle served as the former Mauritian High Commissioner to South Africa and London.

Between 2015 and 2016, he worked for Citigroup as the director of government affairs for sub-Saharan Africa. He also served as the Joint Monitoring and Evaluation Commission’s deputy chief of staff for strategy. He has spent the better part of his two decades building strong senior African ties. Braverman’s uncle currently resides in London.

In Okhla, Delhi, one of her uncles, Fr. Ayres Fernandes, serves as the retreat center’s director. He and the UK Home Secretary both celebrate their birthdays on April 3.

Does Suella Braverman Have Brothers And Sisters?

In addition to Cyprus, Suella Braverman has relatives in London, Goa, Delhi, and other cities.

Their names have not, however, been recorded. Suella’s father’s side counts two aunts and three uncles in all. In a similar vein, she has Indian-born maternal aunts.

In 2018, Rael Braverman and Suella Braverman got married. A year after Suella had accepted Rael’s marriage proposal while on vacation in Cyprus, the pair wed in Parliament.

Suella, a Parliamentary Under-Secretary in Theresa May’s administration, and Rael exchanged vows in front of the Commons. About 100 people, if memory serves, attended the event. Suella captured images of the official wedding after-party at her Fareham council seat and shared them on her website.

Along with his wife, Rael Braverman has been active in politics. He helped Braverman throughout the Brexit campaign and dropped flyers during the 2017 general election. The couple has a home in Locks Heath as of 2022.

She Is A Mom To Two Children

Suella Braverman and her spouse have two kids together. George, her firstborn, was born during the summer of 2019.

The lawmaker at the time rose to fame for continuing her voting duties as an MP while on maternity leave by using a proxy mechanism that had been created about the same time. Expectant mothers, expectant fathers, and adoptive parents can all use the proxy system. They are frequently paired with a rival politician who is also absent in order to balance the votes of MPs who are absent.

In the year 2021, Suella and Rael welcomed a girl as their second child. After their baby was delivered, the couple gave the University College Hospital London Maternity Team high praise.

The couple’s personal and family photos are not available online. They have prioritized maintaining a secluded lifestyle while protecting their infants from the public.

What Is Suella Braverman’s Religion?

A member of the Triratna Buddhist Community is Suella Braverman. Every month, she visits the London Buddhist Center.

The UK Home Secretary took her oath of office in accordance with the “Dhammapada” canon of Lord Buddha’s sayings, according to CNBC TV. One of the most popular and well-known Buddhist texts is the Dhammapada, which contains 423 verses that were spoken by Gautama Buddha to his followers.

Braverman’s family has, nevertheless, dealt with other cultures. Her father, who is of Goan heritage, is a Christian, whereas her mother was born into a Hindu family. 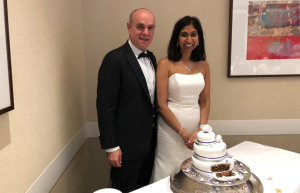 Suella Braverman Net Worth In 2022

Suella Braverman, who was recently named the UK’s new Home Secretary, is thought to be worth more than $6 million.

Her political career is her main source of income. She worked as a barrister before joining politics. She made her political debut in 2005 by competing in the general election from Leicester East, where she finished in second place.

Braverman was chosen to serve as the Conservative candidate for Fareham in May 2015. She was re-elected in 2017 and 2019 and has since served in the legislature. She had also launched a campaign of her own to succeed the current UK Prime Minister, but she was shortly eliminated and finished in sixth place.

Since September 6, 2022, Sue-Ellen Cassiana “Suella” Braverman QC, a British politician and lawyer, has held the position of Home Secretary. She was born on April 3, 1980. From 2020 until 2022, she served as England and Wales’ Attorney General. Since 2015, she has served as the Hampshire town of Fareham’s Member of Parliament (MP). She led the European Research Group as its president from 19 June 2017 until 9 January 2018, and she is a member of the Conservative Party.

She was appointed by Theresa May to the position of Parliamentary Under-Secretary of State for Exiting the European Union in the January 2018 reorganization. Later that year, after quitting in opposition to the proposed Northern Ireland backstop, she returned to the opposition benches. In the February 2020 cabinet reshuffle, Boris Johnson named Braverman as the Attorney General for England and Wales and the Advocate General for Northern Ireland. She also received an automatic appointment as Queen’s Counsel.

Braverman ran for the Conservative Party leadership after Johnson announced his resignation in July 2022, but he was removed from the running after the second round of voting. She then backed Liz Truss’ campaign for Conservative leader. Braverman was appointed home secretary after Truss was chosen as the new prime minister.

Braverman was born to Indian immigrants Christie and Uma Fernandes (née Mootien-Pillay), who came to Britain from Kenya and Mauritius, respectively, in the 1960s. Her father, who is of Goan origin, works for a housing association, while her mother is a nurse and a councilwoman in Brent. Her mother was a Mauritian Tamil Hindu who was born into a household. Mahen Kundasamy, a former Mauritian High Commissioner to London, has a niece named Braverman.

Braverman was raised in Wembley after being born in Harrow, Greater London. She received partial scholarships from the Uxendon Manor Primary School in Brent and the fee-paying Heathfield School in Pinner, where she later studied law at Queen’s College in Cambridge. She served as the head of the Cambridge University Conservative Association while she was an undergraduate.

As an Entente Cordiale Scholar and an Erasmus Program participant, Braverman spent two years studying in France, where she earned a master’s degree in European and French law from Panthéon-Sorbonne University.

In the Commons in February 2018, she tied the knot with Rael Braverman. They welcomed their first child in 2019 and their second in 2021.

Braverman regularly visits the London Buddhist Center and is a member of the Triratna Buddhist Community (formerly known as the Friends of the Western Buddhist Order). She embraced the Dhammapada as her oath of office.

In both the general election of 2001 and the 2003 Brent East by-election, her mother ran as the Conservative candidate in Tottenham.

At Middle Temple, Braverman was admitted to the bar in 2005. She finished her pupillage at 2-3 Gray’s Inn Square (now Cornerstone Barristers), but she didn’t begin her tenancy there. Instead, she started working at No5 Chambers, the London office of a sizable Birmingham establishment. She previously worked in litigation, including the “basics” of judicial review for a government attorney who specialized in immigration and planning law. In 2010, she was named to the Attorney General’s C panel of counsel, which handles entry-level government cases.

Aryna Sabalenka’s Parents: Who Are They? Tennis Champion Grew Up In An Athletic Family In Minsk, Belarus

Godwin Igwebuike, a running back, played college football at Northwestern.