Sonu Sood is among the few celebrities in Bollywood who started their career from scratch. Sood was born in Moga, Punjab on 30 July 1973. His mother Santosh Chimra was a teacher while his dad, Varinder sood, had a fabric business. He has 4 siblings: Radha Sood, Dolley Sood, Puja Sood and Dr. Vivek Sood. 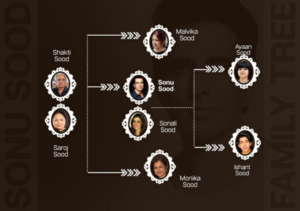 He developed interest in acting after he started engaging in modelling events in his college, Yeshwantrao Chavan, in Nagpur. He wanted to go to Mumbai after completing his college in the 1990s to be a performer. However, he wished to take small steps and later on, started modelling in Mumbai.

Like thousands of people, Sood started distributing his portfolio pictures to various casting directors in film studios. He got his first film in 1999, when director Bharathi offered him a role in Kallazhagar.

Sood is also quite famous because of his love life. Sood has been married to Sonali sood for approximately 2-3 years now. He fell in love at a young age before his acting career took off.

Apart from being a model and actor, Sood is also a film producer. Sood, who is reportedly worth $17 million, started his production house Shakti Sagar productions in 2016.

Moreover, he also owns a family owned- hotel called Shakti Sagar near Iskcon at Juhu Mumbai. He recently offered it to the local police for the use of paramedical forces fighting coronavirus.

Sood has become the messiah of thousands of workers in India. He had shifted thousands of migrants — that are walking barefoot for 1000s of miles to their village – home.

Sonali Sood was born on december 4th at Nagpur, maharashtra.She holds an MBA degree from the University of maharashtra. She was born in a south indian family and is telugu. During her graduation in nagpur, she met the renowned bollywood celebrity sonu sood,who was studying engineering in nagpur.

They tied the knot on September 25, 1996. She’s the most important support system for him personally.

Also they are blessed with two children Ishant and Ayaan. Despite being a high profile family, they always like to stay away from the limelight. Sonali does not always have some Bollywood relations which is why she isn’t popular as other celebrity wives.