With the casting of Shira Haas in the role of Sabra in the upcoming installment of the Captain America franchise, Captain America: New World Order, Marvel is getting ready to expand its universe even further.

Shira Haas, who was born and bred in Israel, achieved popularity on a global scale with her limited series on Netflix titled “Unorthodox” in the year 2020. She is now getting everything ready for her first appearance in the Marvel universe, which will take place in Captain America 4.

Let’s take a look at her accomplishments as well as her filmography. 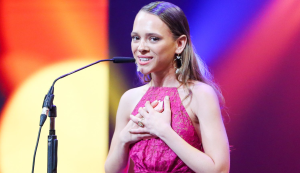 Shira Haas, an Israeli actress, rose to recognition thanks to her parts in many locally produced films and television shows. She is the recipient of two Israeli Ophir Awards, and her performance in the Netflix miniseries Unorthodox garnered her praise from critics all over the world.

Shira Haas was born in Tel Aviv, Israel, to a Jewish family who did not observe any religious traditions. She received her training in theater at the Thelma Yellin High School of Arts when she was a young student there. In addition to that, she served as a volunteer for the Israel Defense Forces for a brief length of time in the military theater.

After making her stage debut at the Cameri Theater in Tel Aviv when she was just 14 years old, Shira Haas went on to make her television debut in the television shows Shtisel and Princess. Both The New York Times and The Hollywood Reporter have nothing but admiration for her.

A Tale of Love and Darkness was the film in which she made her first appearance on the international stage. Since then, she has starred in a variety of films, including The Zookeeper’s Wife, Foxtrot, The Jeweler, The Switch Principle, Harem, Broken Mirrors, Noble Savage, Mary Magdalene, Esau, and The Conductor, amongst others.

As a result of her work in this role, Haas was recognized with a nomination for the Primetime Emmy Award for Best Lead Actress in a Limited Series at the 72nd Annual Primetime Emmy Awards, making her the first Israeli ever to receive such an honor in the acting category.

In the upcoming film produced by Marvel Studios titled Captain America: New World Order, Shira Haas will be seen playing the part of Ruth Bat-Seraph/Sabra. In the comics, Sabra was the first person to ever join the Israeli Mossad and become a super-agent.

However, Marvel has confirmed to Variety that it would be taking a “fresh approach” with Sabra when adapting the character for the big screen. The presence of the figure in the comics has been the subject of debate. They had in common:

Sabra made her debut in the pages of The Incredible Hulk comic book sometime in the early 1980s. Her participation pushed the world of Marvel comics into the conflict that is taking place between Israel and Palestine, which became a source of dispute as a result.

In the Hulk comic published in 1981, Sabra did not exhibit much regret over the killing of a Palestinian youngster until the Hulk taught her about the importance of human dignity.

Marvel Studios has made the announcement that the fourth installment of the Captain America series would be titled Captain America: New World Order. It was just recently reported that the film will be shown at the D23 Expo Panel, and its premiere is scheduled for May 3, 2024.

In his role as a writer for the film, Malcolm Spellman will reprise his role as the showrunner for the Disney+ television series. Dalan Musson and Julius Onah will direct the project. It takes place after the events of “The Falcon and the Winter Soldier,” in which Sam Wilson ultimately inherited Steve Rogers’ shield and became “Captain America.” They were successful in defeating the Flag Smashers thanks to the assistance of Sharon Carter, Bucky Barnes/Winter Soldier, and the United States Agent.

Keep an eye on this space for further information and updates regarding Captain America: New World Order from Marvel Studios. In the month of May in 2024, the movie will be released in theaters.

Shira Haas is an Israeli actress. She was born in Hebrew on May 11th, 1995. She first rose to fame on a national level for her performances in Israeli television and film, for which she received two Israeli Ophir Awards out of a total of five nominations since 2014. She rose to prominence in the world of acting in 2020 thanks to her performance in the Netflix drama Unorthodox. She received nominations for both the Primetime Emmy Award and the Golden Globe Award for her work in this role. Haas’s performance in the Israeli drama film Asia earned her the award for Best International Actress at the Tribeca Film Festival that same year (2020).

Haas was born into a Jewish household that was not religious in Tel Aviv, Israel. Her parents are both Ashkenazi Jews, which means they are of Polish, Hungarian, and Czech Jewish origin. They were both born in Israel, which is why they are referred to as “Sabra.” Her paternal grandfather had been a prisoner at the Auschwitz concentration camp during the Nazi occupation of Poland in World War II. Both of her grandparents survived the Holocaust. Her family relocated to the city of Hod HaSharon in Israel when she was just one year old, and that is where she spent her childhood along with her older sister and brother. Haas was diagnosed with kidney cancer when he was just two years old. He underwent a rigorous course of therapy and made a full recovery two years later.

She completed a brief stint of volunteer service in the Israel Defense Forces’ military theatre after graduating from the Thelma Yellin High School of Arts in Givatayim, Israel, where she had majored in theatre.

Haas arrived in Berlin two months prior to the beginning of filming for the limited Netflix series Unorthodox in order to study Yiddish, which was going to be the primary language used in the series. Unorthodox will premiere in 2020. In addition to taking Yiddish classes, Haas had to shave her head, take piano and singing lessons, and learn how to play the piano in order to prepare for the role of Esther “Esty” Shapiro, a character who flees her arranged marriage and the Ultra-Orthodox community in Williamsburg, which is located in the borough of Brooklyn in the city of New York. The show is inspired by the real-life experiences of Deborah Feldman, who chronicled those events in her autobiography with the same title.

The writer for The New York Times, James Poniewozik, referred to Haas as “a phenomenon” and called him “expressive and compelling.” She was referred to as “mesmerizing” and “excellent” by Brigid Delaney of The Guardian. She also noted that because she was “physically little, like a child,” the spectator felt an urgent need to protect her. Sheena Scott of Forbes stated that Haas “makes a fantastic performance as Esty, full of nuance, sensitively portraying her character’s inner struggle and happiness without needing to speak a word.” She said that Haas “offers an incredible performance as Esty, full of subtlety.” According to a piece that Hank Stuever wrote for The Washington Post, she “lends a somber and yet vulnerable luminosity to the part.” As a result of her work in this role, Haas was recognized with a nomination for the Primetime Emmy Award for Best Lead Actress in a Limited Series at the 72nd Annual Primetime Emmy Awards, making her the first Israeli ever to receive such an honor in the acting category.

In the Israeli film Asia (2020), which had its world premiere online at the 2020 Tribeca Film Festival because of the COVID-19 pandemic, Haas acted opposite Alena Yiv in the character of a daughter who becomes confined to a wheelchair after contracting the virus.

Haas was given the prize for Best International Actress at the festival for the character that she played. She is an extraordinarily honest and present performer who provides depth to everything she does. The jury remarked that her face is a never-ending landscape in which even the smallest expression is painful. Her work in the movie was lauded at the 30th annual Israeli Ophir Awards, when she was named the winner of the award for Best Supporting Actress. At the end of April 2020, she participated, along with other Israeli celebrities, in an online celebration commemorating Israel’s 72nd Independence Day. In June of 2020, Haas became a member of the Creative Artists Agency roster.

How did Shelby Jordan die? NFL star cause of death Explained