The dystopian science fiction drama series ‘See’ is an Apple TV+ original production. It was created by Steven Knight (‘Peaky Blinders’). The action takes place in a world in which a viral pandemic has eradicated the vast majority of the human race. The descendants of those who survived have experienced a loss of their ability to see. The plot begins as sight begins to return to the earth and centers on a man named Baba Vos (Jason Momoa), who is tasked with the responsibility of shielding his sighted stepchildren from a world in which their very presence is considered a blasphemy against God.

The battle for Paya begins in the seventh episode of season 3, titled “God Thunder,” when Sibeth launches an assault with her bombs, which are hurled towards Pennsa by trebuchets. In the meantime, Haniwa discovers what the key that Harlan left her before he passed away unlocks, and it just might be the way out of Pennsa’s predicament that she has been looking for. This is everything you need to know about the conclusion of the seventh episode of the third season of “See. 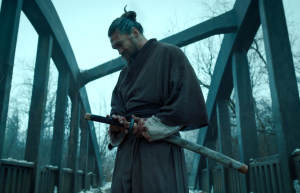 The episode starts out with a mixed force of fanatical Witchfinders and renegade Trivantian soldiers under the command of Tormada making preparations to invade Pennsa. Kofun, who was captured by the Witchfinders in the previous episode, is brought before Sibeth. As Kofun comes to terms with what is transpiring, he is shocked and overcome with guilt since he is aware that he is the one who let the disturbed and homicidal woman go. Kofun tries to argue with Sibeth by reminding her of their son and begging her to be a mother during the brief pause in the bombing that Sibeth puts in place to allow her sister the opportunity to reconsider their situation and surrender. Even though it seems unlikely that it will make a difference, she still sends Kofun into the city to deliver her demands to Maghra.

After being knocked out by one of the explosions that hit the palace, Maghra finds herself remembering the times when she was with Baba in her nightmares. During this time, Baba, Haniwa, and Ranger make their way to Pennsa, where Baba’s dog, No, leads them to Maghra. They look under the throng and locate Maghra and Tamacti Jun, both of whom are hurt but still alive. After Kofun arrives and gives the information that this fight is futile to the Payans, Maghra begins to contemplate the possibility of travelling to Sibeth herself. The Payans have come to the realization that they cannot win this war.

Also read: Has Fate: The Winx Sagabeen renewed for Season 3? Everything To Know About The Series

In episode 6, when Harlan has succeeded in convincing the others to abandon him after their encounter with the cannibals, he gives Haniwa a key. Pennsa is Harlan’s city; Maghra’s authority over it is limited to that of her role as queen of all Paya. As a result, it is reasonable to assume that Harlan has more information than anybody else, even the queen, regarding Pennsa. When Maghra finds out that Harlan has passed away, she is, as one would expect, completely saddened. Since they were young, they had known one other as pals. She admits to her daughter that she took advantage of the fact that he loved her and that he was in love with her. However, Haniwa points out to her that Harlan was not someone who could be used in any way if he did not like to be used.

In the end, Haniwa is successful in locating the chest to which the key belongs. Both Maghra and Haniwa discover a map and a sound wand (also known as a tuning fork) inside of it. At first glance, it appears to be a very standard map of Pennsylvania. However, after examining the map more carefully, both the mother and the girl realize that it displays something else as well: the tunnels that Harlan and his smugglers utilized, which were situated underground and were safe from the bombardment by Sibeth’s troops. Maghra is forced to come to the realization that they are losing this conflict and makes the decision to flee through the tunnels.

Why Does Baba Decide to Confront Sibeth?

When Maghra makes the decision to escape, she does not receive unanimous support from everyone. Tamacti Jun is on board with the decision, but he is concerned that they will continue to be chased either until they hold their position and battle or until Sibeth achieves what it is that she desires. Maghra tells Baba that he was always right, and that their family should have moved into the mountains rather than staying involved in all the politics and fighting that was going on. She relays to Baba that this is the course of action that they need to take after they emerge from the other side of the tunnels. If she is gone, Maghra hopes that her sister will be able to forgive the rest of Paya for what they did to her.

Nevertheless, at least with regard to this particular matter, Baba is more grounded in reality than his wife. He is aware that Sibeth will pursue his family no matter where they go because he has seen it happen before. His wife and their children will never be able to find serenity as long as she is still alive. Consequently, when no one is looking, he climbs back to the surface and makes his way towards Sibeth’s camp. Because Tormada was responsible for Ranger’s torture, Ranger decides to tag along with him and get his revenge on him.

Also read: Vampire Academy: Will There Be A Second Season Of The Series?

See is an American science fiction drama television series that was made for Apple TV+. Jason Momoa and Alfre Woodard star as the main characters in the show. The plot of the series takes place in a post-apocalyptic dystopia in the far future. Under this world, a blind tribe lives in the belief that two of its children possess the legendary ability to see. It was written by Steven Knight, and Francis Lawrence was in charge of the direction. Along with them, Sylvia Hoeks, Hera Hilmar, Christian Camargo, Archie Madekwe, Nesta Cooper, and Yadira Guevara-Prip are featured in the film. Members of the production team who are also executive producers are Jenno Topping, Kristen Campo, Peter Chernin, and Knight Lawrence. The first episode of the current season aired on November 1, 2019, and the show has been picked up for a second season. However, production on the show was briefly halted because of the COVID-19 epidemic. The last scene was filmed on March 18, 2021, and the premiere of the second season will take place on August 27, 2021. Apple made the announcement that the show would be continued for a third season in June of 2021.

In June of 2022, it was revealed that the final eight episodes of the series would be contained within the third season of the television show. The premiere of the last season took place on August 26, 2022.

In the 21st century, a virus was responsible for the eradication of the vast majority of humanity. Fewer than two million people managed to live, and none of their offspring are able to see today. The events of See take place several centuries later, by which time civilization has developed new ways to socially engage, create, hunt, and survive without eyesight, but at a far lower economic level. These new methods are explored in the novel See. The idea of vision has been elevated to the status of a myth, and any discussion of it is seen as heresy.

The knowledge of the old, sighted world has been lost or corrupted, and humanity has reverted to tribal hunter-gatherer cultures and societies similar to those that existed throughout the middle ages. Some people believe that gods used supernatural means to fashion materials such as metal, concrete, and plastic. Others hold that these materials have always been.

A pregnant woman named Maghra makes her way into the mountains in search of the Alkenny tribe in order to seek refuge with them. Baba Voss, chief of the Alkenny people, is unable to have children of his own so he decides to marry her and adopt her children instead of trying to have children of his own. Their real father, Jerlamarel, is on the run from the Queen of the Payan kingdom because he is accused of practicing the heretical religion of “sighting” (the natural ability to see). The rumor that Jerlamarel is the father of children quickly spreads, which leads to a manhunt for Jerlamarel and his children. Against the Queen’s soldiers, Baba Voss is tasked with defending not only his family but also his tribe.