The Carlos López-produced criminal drama “Santo” on Netflix centers on Miguel Millán and Ernesto Cardona, two police officers from Brazil and Spain, who cross paths while pursuing an invisible drug kingpin named Santo. Cardona travels to Madrid with Santo’s mistress Bárbara in order to track down Santo and seek revenge on him for the murder of his partner Vera. Santo has come to Madrid to establish a new drug empire using occult techniques. With stunning revelations and developments regarding Santo’s identity and goals, the captivating Spanish television series’ first season comes to a close. Let us share our opinions if you’d like a closer look at the same. Spoilers follow. 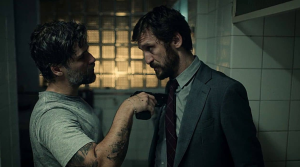 Cristóbal and his son Mario, two local drug dealers, are killed at the start of “Santo.” For the sake of Cristóbal’s wife Maria, with whom he is having an affair, police officer Miguel Millán, who also works for the local drug gang that includes Cristóbal, sets out to find the killers with his colleague Susi. The investigation by Millán and Susi leads them to three Norwegians who also attempt to assassinate the first victim. The Norwegians are revealed by Millán and Susi to be men under the direction of Santo, a Brazilian drug lord with no recognized face or any details about his identity. Ernesto Cardona, a policeman from Salvador in the Brazilian state of Bahia, enlists in Santo’s drug operation as an undercover agent.

Cardona’s cover eventually gets broken, endangering his goal. Nevertheless, Bárbara, Santo’s mistress, offers him a second opportunity to locate Santo since she needs the police’s assistance to flee the undetectable drug lord. Cardona and Barbara flee to Spain in search of protection, but Santo kidnaps them. While looking into Santo, Millán ends up saving Cardona from a warehouse where the drug lord used to sacrifice people for his safety and benefit. They eventually locate Bárbara, but instead of cooperating with the police, Cardona and Bárbara decide to flee and seek refuge in a hideout.

Cardona finds it difficult to get over the loss of Vera, who had introduced him to Exu, an African-derived spirit. He receives the “thread of Exu,” which he wears for protection, as a believer. Santo’s occult rituals also cause him to have disturbing thoughts about killing a child for the latter’s human sacrifice. In the meantime, Millán’s superiors learn of his connections to a nearby drug cartel. Nevertheless, he creates a lie in order to keep Maria’s investigation going. A group of kids are also kidnapped by Santo’s men at the same time for additional sacrifices.

Cardona’s Brazilian colleague Paulo travels to Madrid to assist him. He is slain by Santo’s men, who then take Barbara to the warehouse after the confrontation. Since Santo wants Millán to sacrifice a child, the Norwegians kidnap Millán, and they all wind up in the same warehouse. Cardona steps in and halts the offering. While Cardona and Millán look for Santo, Susi, who has arrived at the warehouse, rescues the kidnapped children.

Santo Season 1 Ending: Who is Santo?

Even his closest friends haven’t seen Santo, one of the most notorious drug lords in the world. Police agencies from various nations are unable to locate even a single image of the culprit. But because Barbara is Santo, Santo has always been around them. Bárbara created the idea and perception of a strong, powerful, and undetectable drug lord to divert the attention of her adversaries, rivals, and law enforcement officers. By being with them and becoming aware of their every move, Bárbara can appear to be Santo’s runaway and divert officers like Millán and Cardona.

Barbara is aware that, in a world dominated by powerful men, she cannot establish a global drug trade. If she is shown to be the true boss of her drug enterprise, she must have understood the risk of someone seeking to “dethrone” her from the empire she had built. As a result, she realizes that having a strong, masculine figure is really necessary. Because they would be terrified of such a powerful being, Bárbara’s ability to live among her own men depends on them. She can command and direct her troops under the guise of being Santo’s mistress since she is seen as the person who is most connected to the fictitious Santo.

Bárbara is also capitalizing on the innate human fear of the “invisible” through the fictitious Santo. Santo continues to be an authoritative, enigmatic, and frightening figure even among Bárbara’s rivals and government officials of other nations because no one in the world can truly assess the power and authority of an imagined creature. She is taking advantage of the tendency for people to be afraid of the mysterious and invisible. The popularity of Barbara’s creation is evidenced by the inclusion of occult rites and other paranormal acts, which further enhance the myth of Santo.

Despite the fact that Millán and Cardona are aware that Bárbara is Santo, they are unable to apprehend her, which allows her to flee. Millán, who is attacked by the drug lord’s goons, is also taken to the hospital. Bárbara sends him a video of holding Luca at gunpoint when he is being admitted to the hospital. Although Bárbara controls Luca’s destiny, it’s possible that she won’t be in a rush to murder her. The fact that Barbara chose to give the policeman the footage instead of immediately killing his daughter suggests that the drug lord still has some plans for Millán. It’s possible that Barbara is using Luca as bait to manipulate the policeman.

Millán may be a beneficial addition to Bárbara’s squad as she prepares to construct her own drug kingdom in Spain, especially given her precarious position. The fact that Millán and Cardona are the first authorities to successfully uncover the truth about Santo suggests that Bárbara is deteriorating physically. At that point, she will benefit from having someone like Millán on her side if she wants to keep smuggling drugs into Spain. Thus, it is anticipated that Bárbara will use Luca to blackmail the policeman.

Since Millán risked his life to defeat Santo, his superiors might consent to his carrying out his investigation and capturing Santo. If so, serving Barbara might be the price Millán has pay to keep his daughter safe. The police officer may not have any moral dilemmas about aiding Barbara if he stands to profit from it because he has previously helped local drug lords in exchange for money.

Why Does Cardona Save Santo/Bárbara?

Millán intends to kill Bárbara once she reveals that she is Santo in order to keep his promise to Maria. Cardona, though, steps in and buys Barbara some time. Following his “rescue” of Barbara from Santo, Cardona begins to develop a close bond with her. The times spent hiding from the shared adversary and fighting alongside one another strengthened that bond. Even after discovering that Bárbara is Santo, Cardona may still feel affection for her. Cardona intends to get revenge on the person who killed his partner Vera when he arrives in Spain.

Cardona’s fury had subsided by the time he realizes Santo is Barbara. Cardona has no other motivation to defend the man who labeled himself a “kid killer” after killing Vera, her nephew, and a portion of himself. Cardona could prefer to murder Bárbara himself than to give Millán the task. However, after halting Millán, the Brazilian doesn’t approach her with any intent to kill her, suggesting that Cardona’s love for Bárbara must have impacted his behavior.