Sangay Tsheltrim is a retired. Captain [soldier], former royal bodyguard and also an actor. He has also been Mr. Bhutan and Mr. Asia. Sangay has also passed NDA / IMA. He is also a bodybuilder and used to own a health club in Thimpu to fulfill his passion. Now, Sangay is going to debut in Bollywood with the role of a villain in Salman Khan’s upcoming film Radhe: Your Most Wanted Bhai. 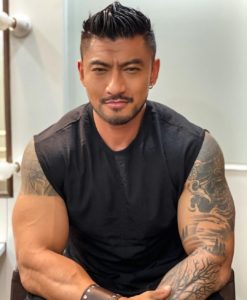 In this film, Sangay plays the role of villain against celebrity Salman Khan. Sangay Tsheltrim made a comment in an interview that, I feel very honored that I was given the risk of being truly worth having with Bollywood superstar Salman Khan. Also, he shared a pic on his Instagram account with Salman Khan from the set of Radhey: Your Most Wanted Bhai. 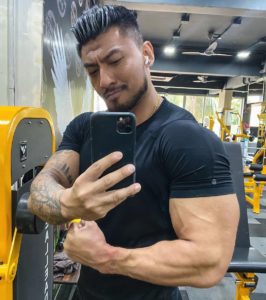 In an interview, Sangay said that he has a friend in India named Haider Khan, who is very close to Bollywood superstar Salman Khan. Hyder Khan has also worked with Salman Khan in the film Dabangg 3. Therefore, in April 2019, Sangay Tsheltrim came to India to meet his friend Hyder with the intention of making an India-Bhutan collaborative film. Then, Hyder invites Sangay to come on the set of Dabangg 3 to meet Salman Khan. Sangay Tsheltrim is a big fan of Salman Khan and meeting Salman Khan was like a dream come true. Sangay met Salman on the sets of Dabang 3. 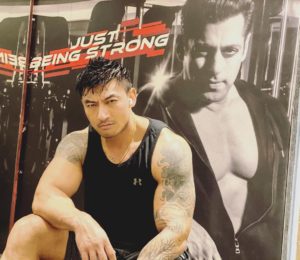 Sangay Tsheltrim was very athletic since young. There is something in his heart that he has to serve the country. He had a clear mindset since childhood that he had to join the army in future. Sangay worked hard and luckily got admission in the National Defense Academy, where he trained for 3 years. He also learned taekwondo as a child. 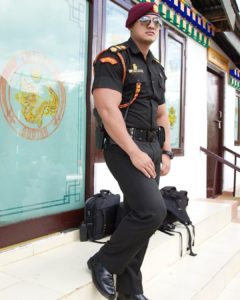 Sangay Tsheltrim as a Soldier

After receiving 3 years of training, he took a commando course and was finally selected into the Bhutan Royal Army in December 2005. And deployed on the Sino-Bhutan border. He did very well in his army career and so in June 2008 he was chosen as the royal bodyguard of the King of Bhutan. He served the country as a royal bodyguard for 5 years. And then leave his job to persue his passion, the bodybuilding championship.

In Macau, he received his first bronze medal at the Asian Championships. In 2015, Sangay got his first gold medal at the national level in a championship in Uzbekistan. And after this he worked for the title of Mr. Bhutan and was finally awarded as Mr. Bhutan in 2017.

You know, Sangay has a very famous gym center in Thimpu named Muscle Factory. After all this success. Sangay made his debut in the film industry with the film “Singye” in 2018 and performed brilliantly in the film. He also received the Best Male Debut Award for this film and it was here that he started his film career. For his best performance, he was selected for the role of a villain in a blockbuster film by Salman Khan titled Radhey: Your Most Wanted Bhai, which is set to release in May 2021.

Little is known about Sangay Tsheltrim but it is true, in an interview, he admitted that he was surrounded by so many friends during his school days when he was growing up, and he also took . He tried drugs until his 10th grade. But fortunately he never got accustomed to it and got rid of drugs and started focusing on his career, saying that NDA training was the turning point of his life. From there he became mentally and physically strong.

What is Sangay Tsheltrim’s Estimated Net Worth?

Sangay Tsheltrim is a former army officer who also worked as an actor and bodybuilder. He currently has a successful career in all three of these fields. He would earn crores from his acting career and approximately 10–20 lakhs Indian rupees from the ‘Muscle Factory’ gym that he owned. It is estimated that Sangay’s net worth is somewhere in the neighbourhood of 6-7 crores of Indian rupees.
Sangay Tsheltrim began his professional life as an officer in the Tibetan Army before transitioning into the world of bodybuilding and modelling. He had the dream of taking part in international tournaments and doing well enough to bring honour to his country. In addition to that, you may have seen him in a few different movies.

Sangay is a former member of the military who currently works close to Bhutan’s border. 2005 marked the year that he was officially accepted into the Royal Bhutan Family in the capacity of a skilled officer. After that, in June of 2008, he was given the position of serving as the King of Bhutan’s Bodyguard. Five years passed while he was serving out his sentence. His followers were taken aback when they discovered that he had previously served as an officer in the Bhutanese Army. On both his Twitter and Instagram sites, Sangay made the announcement.

In the year 2018, Tsheltrim had his first appearance on screen in the movie “Singye.” In his first film, which earned him the title “Best Male Debut,” he made his debut in the film industry. Thunder Dragon Productions was in charge of the creation of the movie “Rohingya,” which was based on the experiences of nine million Rohingya refugees and which he worked on in that same year. Through a mutual friend who was employed on the set of the film “Dabangg 3,” Sangay was introduced to the Bollywood superstar Salman Khan.

Salman Khan was blown away by Sangay. It was proposed to him that he play the role of Lota, a villain, in the movie “Radhe: Your Most Wanted Bhai.” The film was directed by Prabhu Deva, and Salman Khan took on the role of the lead character in the movie. He has participated in a number of bodybuilding competitions, one of which earned him a bronze medal at the “Asian championship” in Macau. In addition to that, he has been given the title of “Mr. Bhutan 2017.” Bhutan Sangay is an astute businessman who manages the several enterprises in which he is involved with aplomb. He is the founder and owner of Muscle Factory, a gym in Thimphu.

Who is the lucky lady to call Sangay Tsheltrim husband? He wed Khendum Dorji and has been seen in multiple images with her. Khendum is always there for her no matter what the situation is. The couple welcomed a daughter, Tsomo T Dorji, into the world. On a regular basis, Sangay took his daughter with him on trips to a number of different locations.

How Sange Tsheltrim got “Radhe” The Most Wanted Bhai Film?

When he saw Salman from afar on the set for the first time, he was speechless and speechless in the sky. Later, his friend Hyder requests Salman Khan to meet Sangay. They then met and the conversation lasted for an hour. Sangay says that there was nothing in the conversation about the film or anything like that. After the meeting, he requested Salman Khan to click the photo with him as a fan. Sangay Tsheltrim returned to Bhutan after this and became busy with his life. And after a two-month meeting with Salman Khan, he received a message from Salman Khan’s team that he was offered to work with Salman Khan in his film Radhey: Your Most Wanted Bhai. He was like flying in the sky and working with the Bollywood superstar of his dreams was unbelievable for him. He agreed and that’s how he met Salman Khan and acted in the film. 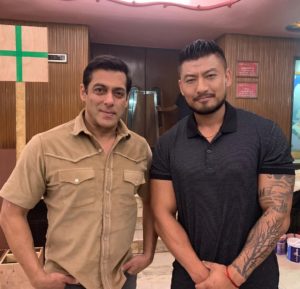 Sangay was born in Phootsholing on the Indian side of the carcass in March 1982. He also became increasingly keen on sports activities and dance at school, captaining the basketball group of his higher faculty and by the time he completed Michael Jackson’s ‘Moonwalk’ he cleared Class 12 in 2001. .
Sangay was selected using the Government of Bhutan to train as a Naval Cadet at the prestigious Countrywide Defense Academy (NDA) in Khadakwasla, India. It is a connection he shares with a member of the ODR group. While at NDA, and later at the Indian Army Academy, Dehradun, he excelled in basketball, dance and physical training games.
After his naval training, Sangay became commissioned as an officer inside the Royal Bhutan Army, before eventually becoming a member of the elite Royal Bodyguard. 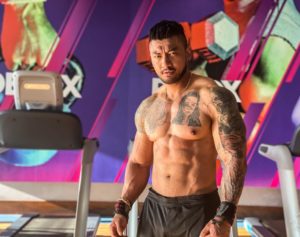