Investigation Discovery’s documentary titled “No One Can Hear You Scream: Gitchie Manitou Massacre” focuses on the gruesome killing of four teenagers in November 1973 at the Gitchie Manitou State Preserve in Sioux Falls, Iowa. The victims were Roger Essem, Michael Hadrath, Stewart Baade, and Dana Baade. In addition to that, it tells the account of the survivor Sandra Cheskey and the events that transpired following the disaster. Who exactly is Sandra, and where can we find her at this point? 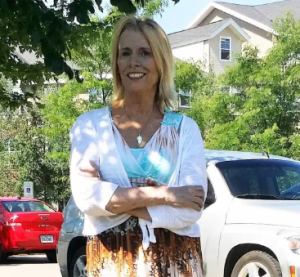 In the fall of 1973, Sandra Cheskey Chrans was a schoolgirl who had just turned 13 years old. In 1972, she had recently relocated to the Tea region, and at the time, she was enrolled in the seventh grade of the Harrisburg School District. She recalled about the day in the early summer of 1973 in Sioux Falls, Iowa, when she was working at a drive-in movie and ran into Roger Norman Essem, then 17 years old. They met as she was walking back to her car from the concession stand. She reported that she had “seen the most attractive man I had ever seen in my life.”

As a result, it came as something of a shock when Roger decided to stop and talk to her rather than simply walking past. During the course of their talk, he expressed interest in obtaining her contact information, and Sandra affectionately recalled, “And that is how we first met.” She would see him again for approximately three to four times before the fateful night of November 17, 1973. On the majority of those dates, his friend Stewart W. Baade, whose 1967 blue van served as their mode of transportation, was there. The night in question occurred on November 17.

On November 17, 1973, Sandra traveled with Roger, Stewart, Dana E. Baade, and Michael Robert Hadrath to the Gitchie Manitou State Preserve, which is located on the border between Iowa and South Dakota and is located east of Sioux Falls. A bunch of youths were sitting around a campfire, smoking marijuana and strumming guitars while engaging in activities such as trekking and hosting parties for others under the legal drinking age. Sandra was raised in foster care and attended a mission school, so she was accustomed to being around children who were significantly older than she was. Despite this, the fact that all four males were significantly older than she was did not bother her.

The party had been relaxing for about an hour and a half when they became aware of a noise that sounded like the rustling of twigs and branches at roughly 10 o’clock at night. Robert rushed to investigate the source of the noise, mistaking it for some kind of wild animal, but he was instantly fired at. Next, the horrified group was met by the trio of Fryer brothers who were acting as though they were drugs agents. Later on, the investigators would discover that Allen Earl, David, and James Fryer had been out hunting wild animals when they happened upon the party and decided to ambush them instead of continuing their quest.

After that, Allen would end up kidnapping Sandra, and his other two brothers would end up killing the other two groups of teens before joining Allen in the farmhouse outside of Hartford. After that, James would sexually attack her, and then Allen would drop her off at her house after feeling sympathy for her plight. According to the opinion of a former member of the Iowa Bureau of Criminal Investigation, “Allen wasn’t exactly the brightest bulb. It was probably after the boys were killed by the gunman and it was just him and her left in the truck that he realized she was a person and not simply somebody standing in the woods. She maintained her composure while they conversed, and he was unable to bring himself to kill her.

Where is Sandra Cheskey Today?

Sandra would go on to assist the investigators in identifying the Fryer trio and aiding them in their pursuit of the suspects. She was also the most important witness for the prosecution, and her evidence was a major factor in the Fryer brothers’ conviction; thus, all of them were sentenced to life in prison without the possibility of release as a result of their actions. However, back then at home, things weren’t easy for her because people criticised her for hanging out with boys who were older than she was and her reliability was originally called into question.

When she went back to her old school, practically all of her classmates avoided her after being ordered to do so by their own parents. On the other hand, her father gave her no assistance or comfort when she returned home. As Sandra recalled, her mother did make an effort to provide care for her daughter. “For years I had nightmares, and my mum would crawl into bed with me when I was 15 years old still,” Sandra said. However, because her mother had two jobs and was rarely there for her daughter, Sandra quit school after only a few months of attendance.

She never lifted her head from the ground during her whole youth, throughout her teenage years, and even after she got married at the age of 26. In 2016, she published a book about the event that went on to become a bestseller, and in 2018, she wrote a follow-up to the book. According to recent sources, Sandra currently resides in Iowa with her family. She makes regular trips to Sioux Falls to visit the relatives of those who were killed there, with whom she has a friendly connection. In addition to this, she travels all over the country to do book signings and is an advocate for survivors across various social media platforms.

Where Is Amy Loughren and Her Children Today? The True Story Behind Netflix’s The Good Nurse Explained