An Indian standup comedian, Samay Raina is also a well-known Youtuber and social media influencer. His Youtube Channel is named “Samay Raina”, wherein he live streams chess, PUBG and other games. He also uploads other types of content on his channel on a consistent basis. 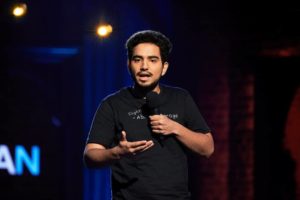 Samay Raina has over 694K Subscribers on his youtube channel. He is known more for his standup Comedy. The 21-year-old Samay was born in Jammu, but was brought up in Hyderabad. His family had shifted to the South Indian state when he was a kid. He discovered the skill of stand up comedy in him after shifting to Pune, where he enrolled for a course in printing engineering.

Samay got started with an open mic in Pune in August 2017. He aimed to bag the first prize, as the winner was assured a slot at the Pune Comedy Festival. However, he came second out of nearly 100 contestants. But, Samay wasn’t going to throw in the towel and became a regular on the Pune scene, while also doing slots in Mumbai on a regular basis. He had a lot of interest in standup comedy and eventually got recognized as one of the most talented individuals in the industry.

By the time the next edition of Pune Comedy Festival arrived, he was already a well-known artist. Samay was picked to perform 8 minutes at a 6 pm slot, in front of 3,000 people. This was his moment and he grabbed it with both hands.

“By the time this Pune Comedy Festival in 2018 took pace, I had already made a mark and was able to get a spot without any competition,” he said.

Born in Jammu on 26 October, Samay Raina completed his education in Hyderabad. He then completed printed engineering from Pune. Samay tried his hand at poetry, guitar, chess, table tennis, rapping, and whatnot, before finding his final destination and passion in standup comedy. Comicstan gave him the spotlight and he managed to get the second runner up prize.

In the wake of Covid-19 Pandemic, Samay started doing live streams of chess and invited his friends. This idea worked wonders and his gaming channel started growing within no time. He collected money from his live streams and started helping social workers and poor people, who were affected by coronavirus.

His YouTube channel is named Samay Raina, which has more than 6.94 Lakhs subscribers.

Some Unknown Facts About Samay Raina

Samay Raina was born in Jammu.

He is a well-known chess player.

He was the 2nd runner-up in Comicstan 2.

He has seen Manik Mahna’s ‘Classmates’ at least five times.

According to him, Rohan Desai is underrated.

He listened to Naezy’s ‘Asal Hustle’ on loop.

Samay Raina is 5 feet & 8 inches tall and his weight is 68 kg. He has Black hair and Black eyes.

Samay Raina has a Net Worth of ₹75 Lakhs. Her Income through YouTube is approx. ₹1 Lakh per month. Samay earns through youtube money, brand endorsement, comedy shows & live shows.