The Directorate of Criminal Investigations said that Nairobi Senator Johnson Sakaja was a possible member of a global criminal organization. This meant that he could be arrested.

Things got worse for him when he found out that the Commission for University Education had stopped recognizing a degree certificate he had used to get permission to run for governor of Nairobi.

Janet Museveni, Uganda’s Minister of Education, is said to have sent government representatives to look for proof of Sakaja’s time at the university. This is said to have caused the controversy over his eligibility to run for governor of Nairobi to become much more heated. 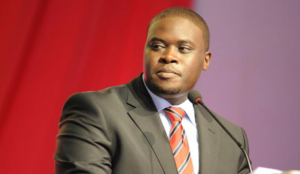 Johnson Sakaja, a senator in Nairobi, was in danger of being arrested Thursday night when the Directorate of Criminal Investigations said he was a suspect in a global criminal organization. At the same time, Ugandan authorities were paying attention to the “fake degree” scandal.

In a dramatic turn of events, Sakaja said that President Kenyatta, who helped him get into national politics, was to blame for all of his problems. This caused a big rift between the two, who came to power in 2013 through their rich party, The National Alliance.

When it came out that the Commission for University Education had turned down a degree certificate that Sakaja had used to run for governor of Nairobi, tensions between Sakaja and the government grew on Wednesday.

But Sakaja got a break last night when the IEBC dispute resolution committee threw out three petitions against him because the people who filed them were not there.

A petitioner asked the dispute resolution committee of the electoral commission to take away Sakaja’s permission to run for governor. The petitioner questioned Sakaja’s degree, which Sakaja defended. A university degree from an approved school is one of the requirements to run for the top county seat.

Johnson Sakaja is a Kalenjin, according to the latest, unconfirmed information from the web. The real name of Sakaja is Johnson Koskei Sakaja, and he was born in Nairobi. In 2008, he got an ID from the state.

Sakaja was born and grew up in Parklands, which was then government housing, as the last of three children. We don’t know much about his childhood, and he hasn’t said much about his mother, father, brothers, or sisters.

Sakaja claimed that his mother had taught him to never look down on someone and that, as a result, he and his brothers started a custom that they have continued to this day.

They have always made sure that the workers got a meal, both when they lived together and when they lived with their own families. She instilled in him the tenacious spirit of a champion, teaching him never to give up until he succeeds and never to allow hatred to play a part in any competition.