According to the Academy of Motion Pictures, Sacheen Littlefeather, a Native American activist who declined Marlon Brando’s Oscar for “The Godfather” on his behalf at the 1973 Academy Awards, passed away on Sunday at the age of 75. Variety says that she was battling breast cancer.

Littlefeather received an apology from the Academy of Motion Picture Arts and Sciences in June for how she was treated that evening at the Oscars. On September 17, Littlefeather went to the Academy Museum to see the apology in person. 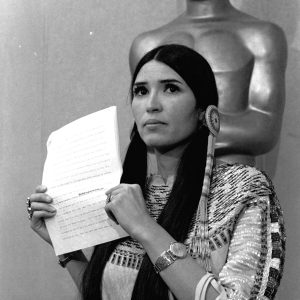 A still of Sacheen Littlefeather from the OSCARS

She was only given 60 seconds to read her message for Native American rights at the Oscars before being dragged off stage to the jeers of the audience.

And the reasons for this include how American Indians are treated in the media today, including in movie reruns on television and the recent events at Wounded Knee.

Born Marie Louise Cruz in Salinas, California, Littlefeather developed a passion for Native American problems in college and took part in the occupation of Alcatraz Island in 1970, when she took on the moniker Littlefeather. She supposedly met Brando, who was interested in Native American concerns, through Francis Ford Coppola, who like Littlefeather lived in San Francisco, after graduating from college. She then joined SAG.

Littlefeather recently discussed her experience representing Brando at the Oscars in an interview with “Variety.

I had never attended the Academy Awards before. By assuring Marlon Brando that I wouldn’t touch that Oscar, I overcame my first obstacle. However, I did it with courage, honour, elegance, dignity, and truthfulness as I left that stage. I accomplished it in a manner similar to that of Indigenous women and my ancestors.

“And, I was greeted with the traditional tomahawk chop and people calling at me, but I ignored everyone. I carried my head high and was pleased to be the first Indigenous woman in the history of the Academy Awards to make that political statement as I continued to walk straight forward with a couple of armed guards at my side.

There was a media blackout on Wounded Knee and the American Indian Movement that was occupying there at that time in 1973. They watched the Academy Awards after Marlon had called to ask them to do so in advance.

“The media boycott would end as soon as they saw me up on stage declining the Academy Award for the stereotypes in the film business and addressing Wounded Knee in South Dakota.”

“Sacheen Breaking the Silence,” a documentary about her life and work, was published in 2021.

Sacheen Littlefeather is an American actress and activist for Native American rights. She is best known for representing Oscar-nominated actor Marlon Brando at the 45th Academy Awards in 1973 while protesting against the stereotypical portrayal of Native Americans in the entertainment industry. After the Academy Awards speech, she continued her activism, actively working to solve a number of Native American issues. Born Marie Louise Cruz in Salinas, California, to a leather stamper mother, Littlefeather has a difficult childhood.

Her father, who was a child of an alcoholic father himself, often abused alcohol and beat up the children. He died of terminal cancer at the age of 44. Following her graduation from California State College at Hayward, Littlefeather joined Indians of All Tribes and later participated in the 1969 occupation of Alcatraz. After changing her first name to Sacheen, she picked up radio and television commercials before eventually landing roles in films. Currently, the actress resides in Northern California. In 2018, she was found to have developed stage 4 breast cancer. 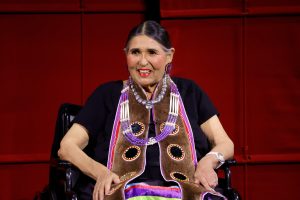 Radio and television ads served as Sacheen Littlefeather’s entry point into the performing world. She played Maggie in the Italian-Spanish criminal drama “Counselor at Crime” in 1973. Her uncredited parts in the 1974 films “Freebie and the Bean” and “The Laughing Policeman,” which were released in 1973 and 1974, respectively, came after this.

Additionally, the actress portrayed Patsy Littlejohn in the action sequel to the 1971 film Billy Jack, “The Trial of Billy Jack,” which starred Delores Taylor and Tom Laughlin. She worked on the movies “Winterhawk” and “Shoot the Sun Down” in the years that followed.

Littlefeather made contributions to a few PBS programmes in the 1990s, such as “The Americas Before Columbus” and “Remember Me Forever.” She made an appearance as herself in the documentary “Reel Injun” in 2009. She released a documentary with the same name in 2018.

Sacheen Littlefeather joined the Alcatraz occupation in 1969, a 19-month demonstration against the American government’s denial of aboriginal land claims that was organised by LaNada Means and Richard Oakes. She co-founded the National American Indian Performing Arts Registry in 1979 after working at St. Mary’s Hospital and the Institute of American Indian Arts.

Littlefeather persisted in his efforts and later rose to prominence in the Native American community in California. In 1988, she assisted Mother Teresa in providing hospice care for AIDS patients. Later, she established the San Francisco-based American Indian AIDS Institute. She was appointed executive director of the Kateri Tekakwitha prayer circles in San Francisco in 2010.

Marlon Brando was represented by Sacheen Littlefeather at the 45th Academy Awards ceremony on March 27, 1973, at the Dorothy Chandler Pavilion in Los Angeles, California. As part of a boycott organised by AIM against the portrayal of Native Americans in the American film industry, Brando, who was nominated for Best Actor for his performance as Vito Corleone in the 1972 movie “The Godfather,” abstained from the ceremony. Littlefeather, who was posing as Brando’s representative, entered the room but turned down the Oscar Roger Moore and Liv Ullmann were holding out to her.

The Academy of Motion Picture Arts and Sciences was moved by her speech to ban the Oscars from being accepted via proxy in the future. Littlefeather was put on a Hollywood blacklist.

On November 14, 1946, in Salinas, California, Sacheen Littlefeather was born as Marie Louise Cruz to a Native American father and a mother of French, German, and Dutch ancestry. Her sisters number two. Her early years were particularly difficult because she had to put up with her father’s abuse.