On July 22, 1977, Ryan Andrew Vogelsong was born in the United States. Throughout his professional baseball career, he went by the nickname “Vogey.”

He played baseball for both the Pittsburgh Pirates and the San Francisco Giants in Major League Baseball (MLB). He played for the Nippon Professional Baseball League (NPB). In 2007 and 2008, he was a member of the Hanshin Tigers and the Orix Buffaloes (2009).

His 2011 switch to the Giants gave his career fresh life. After being chosen for the All-Star team in 2011, he went on to have a run of 16 consecutive quality starts in which he gave up three earned runs or fewer in every game that lasted at least six innings.

He made four starts in the 2012 postseason, finishing with a record of three wins, zero losses, and a run average of 1.09 while helping the Giants avoid elimination twice en route to the World Series victory. When Vogelsong started 32 games for the Giants in 2014, he set a new career high. They achieved enough success throughout the season to win another World Series title. 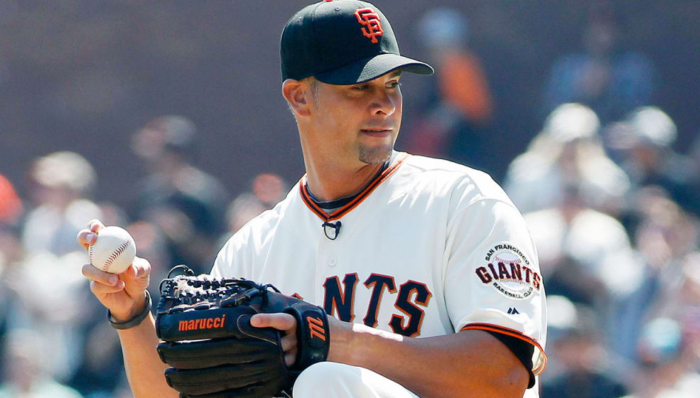 Where Is Ryan Vogelsong Now?

Ryan Vogelsong left the game in 2017, yet he is still involved.

Vogelsong was struck in the face on May 23, 2016, by a pitch fired by Colorado Rockies right-handed pitcher Jordan Lyles. He suffered fractures to the eye’s orbital bone in addition to injuries to the left eye’s socket. He was then placed on the disabled list for a period of 15 days.

The Minnesota Twins and Vogelsong reached an understanding on a minor league contract on January 10, 2017. A spring training invitation was also included. He was fired on March 21, 2017, after only eight innings of spring training saw him struggle to a 7.72 earned run average (ERA).

Prior to the game in 2018, the Giants officially retired Vogelsong’s number as a member of the team during a ceremony at AT&T Park in his honor.

Vogelsong has returned to the Giants after retiring to work as a mobile pitching coach for the team’s younger pitchers. After learning about the club’s farm system, Vogelsong claimed he believed he could be most useful with the Double-A Richmond Flying Squirrels affiliate.

Currently, he spends about a week of every month working with San Francisco prospect who is about to be promoted to the major league club.

In 2001, the same year Ryan was pitching in Nashville’s minor leagues, Nicole Vogelsong, whose birth name was Nicole Holloway, was a bartender there. Before being married on a beach in The Bahamas, the couple dated for a few years.

The pair wed on November 12, 2005, in a ceremony close to Pittsburgh. It was the location of Ryan’s baseball field at the time with the Pirates. The sole child of the couple is Ryder. In addition, the couple has a 12-year-old dog named Yoda.

Ryan Vogelsong’s wife, Nicole, has been by his side through good times and bad, and she has never wavered in her dedication to him. After having a terrible time during his first few years in the major leagues, Vogelsong was on the verge of giving up on the game of baseball.

What Happened To Ryan Vogelsong?

During his first several years in the major leagues, he bounced among the minors.

He briefly lived in Japan before coming back to the United States in 2010 to participate in some minor league games. He inked a contract with the San Francisco Giants before the 2011 campaign began. The Giants promoted Barry Zito to the fifth starting position after he suffered an injury early in the season, where he stayed.

Vogelsong was named an All-Star for his exceptional performance throughout the 2011 season, and he continued to be a difficult foe every fifth day. Vogelsong concluded the year with 14 victories and a 3.37 earned run average, continuing his winning streak into 2012.

Once again, Vogelsong’s professional career was coming to an end after 2015. Vogelsong was traded to the Pittsburgh Pirates in 2001, but they only extended him a one-year contract. Vogelsong, who was once more playing swingman, had a much better start. Despite having a high FIP, Vogelsong’s ERA was consistently less than four during the course of his first few starts of the season.

Vogelsong spent some time in the Minnesota Twins’ farm system following the 2016 season. Nevertheless, at the conclusion of the Spring Training season, he was finally dismissed. To end his career with the Giants, Vogelsong agreed to a one-day contract. He was granted the privilege of tossing out the first pitch before he retired.

Despite spending his most noteworthy seasons as a professional pitcher with the San Francisco Giants, Ryan Vogelsong completed his career with the Pittsburgh Pirates. He gave them his last professional sales pitch.

Without a question, Vogelsong’s rise to fame did not come easily. There was no sailing in the clear. Vogelsong has experienced everything. He never received much attention as a prospect and had early career difficulties. Before coming back to the United States, he was also required to pitch abroad and have Tommy John surgery.