Riddhi Kumar is an Indian actress and model who is best known for her role in the 2014 movie “Lovers,” which was directed by Anish Krishna and produced by. She has one of the cutest and most beautiful faces, which is why she won the title “Face of India” in a beauty pageant. She was born on October 2, 1997, in Pune, in the Indian state of Maharashtra. She works mostly in the Tamil/Kollywood and Telugu/Tollywood film industries. Riddhi Kumar started out as a model and then went into the entertainment business. She is a well-known actress in the world of movies. The show Pranaya Meenukalude Kadal is what most people know her for.

She finished school in Mumbai, India, and got her degree. She likes to read, take pictures, learn, travel, and surf the Internet, just to name a few. Riddhi became interested in the entertainment industry, especially acting and modeling, soon after she finished school. “Lovers,” a South Indian movie, was her first role. Later in 2018, she was in the Hindi and Telugu versions of the film Anaganaga O Premakatha, which was directed by Pratap Tatamsetti. In 2019, Riddhi was the main character in both “Dandam,” a Marathi film directed by V. Sattu, and “Pranaya Meenukalude Kadal,” a Malayalam film directed by Kamal.

She walked the runway for a few agencies, commercial campaigns, and international designers like ZUKHRA (Uzbekistan), Nivedita Saboo Couture, etc. at the Asia Model Festival 2016, Femina (shopping) fest, citadel walk for a cause, galani fashions, wedding times fashion fiesta, a vegan fest, INIFD Pune, JW Marriott Royal Wedding Show, etc. She also took photos for Tathastu Sarees, Being Indian, and Flipkart and Amazon catalogs. And a few ads, like ones for Silver Palace Jewellery and blood donation. Riddhi Kumar was also the main character in two short films. The first one was chosen for the Goa Film Festival and was featured on the covers of Sauve and Citadel magazines. The second one was shot for Femina, Citadel, Tanishq, Times, and other magazines. She worked with photographers like Sameer Belvalkar and Vijay Powar, who are both well-known. 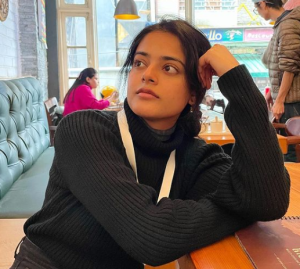 At first, Riddhi Kumar was mostly a model. In the beginning of her career, she did things like modeling and TV commercials for brands like Malabar Gold and Bharat Matrimony. She also entered beauty contests and won the titles of Citadel Miss Pune 2015 and Face of India 2016.

In 2018, she made her film debut in the Telugu movie “Lover” with Raj Tarun in a major role. In the same year, she was in “Anaganaga 0 Premakatha,” a Telugu romantic drama movie directed by Pratap Tatamsetti.

Riddhi was cast as the main character Jasmine in the 2019 romantic drama film Pranaya Meenukalude Kadal. The movie did not do well at the box office, though. 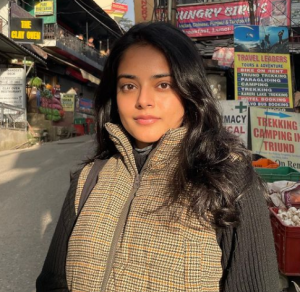 Later in 2019, Riddhi was given the chance to work on the movie “Dandam,” which was directed by V Sattu. It was her first film in the Marathi language.

You can also learn more about Thamanna Pramod by reading about her on Wikipedia.
In 2021, she made her first appearance on the web in the Voot original series Candy. This was a big break for her career. As Kalki Sawant, people loved and praised her, and Riddhi gained a lot of fame and popularity. On top of that, many production houses liked her. Who put her in their new project called “Human” right away.

Riddhi Kumar’s most recent role was in the Amazon Prime web series “Crash Course,” where she played a student named “Shanaya Qazi.”
Before this, she played Tara in the movie Radhe Shyam, which starred Prabhas and came out in 2022 and bombed at the box office.

The winner of the “Face of India” pageant, an Indian actress and model named Riddhi Kumar, has the most beautiful and cute face. She is best known for her roles in Telugu and Tamil movies, for which the audiences gave her a lot of applause. She is the actress with the most buzz in south India. The actress’s great performances have been attracting more and more people.

1-She loves going on trips

Riddhi Kumar likes to travel a lot and loves to go to new places. Paris and Thailand are her favorite places, but she has never been to either one.

2- She likes to try new things

The actress Riddhi Kumar is a person who likes to try new things and loves to meet new people when she goes to new places.

3- The actors she likes best

When it comes to her favorite actors, she looks up to Salman Khan and Akshay Kumar, both of whom are known for doing great work.

She loves to eat, and her favorite food is Indian. Riddhi Kumar always tries out new Indian restaurants so she can try new foods. 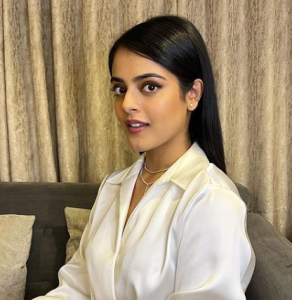 Riddhi Kumar loves her pets and spends a lot of time with them. The actress posts pictures of herself and her pets on her social media pages. She has a cat, a dog, and a chicken as pets.

6- Riddhi Kumar likes to work out

Riddhi Kumar, an actress, likes to work out and takes care of both her physical and mental health. She likes to eat healthy meals and stick to a healthy diet to stay in shape all day.

7- She likes to watch Cricket a lot

Riddhi Kumar likes to play sports and loves to watch cricket. She is very patriotic and always tells the players on the Indian cricket team to do their best.

Her art is a secret talent that not many people know about. Riddhi Kumar is a good painter who makes time for painting often.

Riddhi’s first web show was on Voot in 2021. It was called “Candy,” and it was a crime-thriller with Ronit Roy and Richa Chadha. The show did well in the business world. People paid attention to her on the show because of how she did.
Riddhi has been in a lot of ads and commercials for fashion and lifestyle brands as her fame as an actress has grown. She also got a lot of followers on social media sites like Instagram and Facebook.

She posts photos and videos of herself modeling, traveling, and living her life on Instagram. As an actress, she will probably start to show up on TV shows and on the covers of fashion and lifestyle magazines soon. 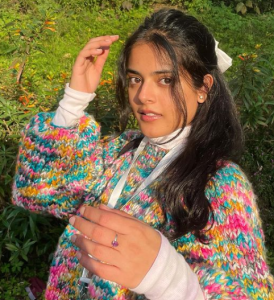 Riddhi Kumar is 5ft 7In tall, which is 170 cm in centimeters. Riddhi Kumar is popular for acting in the movies like Lover, Anaganaga O Premakatha, Pranaya Meenukalude Kadal, Dandam, and Radhe Shyam. People who like her want to know more about Riddhi’s personal life. Read on to find out more.

People follow Riddhi Kumar’s social media accounts because they want to know what she does every day. She weighs 58 kg. Riddhi Kumar was born on February 22, 1998, in Pune, Maharashtra. Fans of Riddi Kumar can read the article to find out everything new about her.

What is Riddhi Kumar’s age?

When does Riddhi Kumar’s birthday fall?

The 2nd of October 1997 is Riddhi Kumar’s birthday.

How tali is Riddhi Kumar?

From what place is Riddhi Kumar?