Mizuhara worries about her grandmother’s deteriorating health in the twelfth episode of season 2 of “Rent a Girlfriend,” which is titled “Girlfriend and Me.” She also remembers the promise that she made to her grandma. She grieves the loss of her grandfather, who reassured her on his deathbed that she will one day realize her acting ambitions. Despite this, she has begun to question her abilities as an actress due to the fact that she keeps getting turned down for roles in auditions. When Mizuhara is on the verge of giving up all hope, Kazuya presents her with an audacious scheme that has the potential to turn things around. This article will provide you with all the information you require on the conclusion of “Rent a Girlfriend” or “Kanojo, Okarishimasu” season 2 episode 12. SPOILERS AHEAD!!! 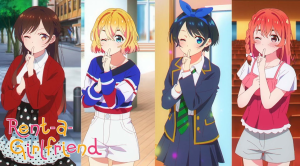 Mizuhara continues to put up her best effort in order to realize her acting goals before it is too late, despite the fact that her grandma is in the hospital and fighting for her life every day. Mizuhara’s grandma Sayuri’s health is deteriorating, thus there is not much time left for Mizuhara to accomplish her lofty dream of showing her grandma a movie in which she stars. Despite this, Mizuhara has always desired to do so. Thankfully, her position as a rental girlfriend enables her to continue to receive the financial support she needs to pursue her acting career.

Mizuhara says that the discovery that her grandma Sayuri had been a famous actress in the past was the spark that ignited her passion in the performing arts. Seeing her on the front of movie DVDs was a major factor that played a significant role in the development of her desire to achieve the same level of success. In the meantime, her grandfather was another person who showed her a lot of support. Unfortuitously, she was still in school when she received the terrible news that he had been gravely injured in a car accident. The tragedy had occurred earlier.

Mizuhara raced to the hospital, where she discovered him with his grandma Sayuri by his side. He was in a severe condition. She prayed with all of her might during the next few days, but unfortunately, his condition did not improve despite her efforts. While he was on his deathbed, he assured Mizuhara that she will one day fulfill her acting ambitions. Mizuhara will never forget that particular instant.

Mizuhara is determined to realize her ambitions because, at this point in her life, her grandma is the only other relative she has. She has a hard and exhausting day, and when she finally gets home, she makes the decision to check the outcomes of her most recent auditions. Mizuhara is unable to secure a part in any of them, which is a great disappointment. In spite of her best efforts, she is continually unsuccessful, and as a result, she finally loses it and starts crying.

She takes the photo of her grandfather in her hands and asks him if she will ever see any of her aspirations realized. Mizuhara rarely displays any signs of emotion, but the recent news about her grandmother’s deteriorating health and her lack of success in landing a part are obviously too much for her to bear. Kazuya, on the other hand, has devised a cunning strategy to assist her in realizing her ambitions, but she is unaware of this.

Rent A Girlfriend Season 2 Finale Ending: How Does Kazuya Plan to Make Mizuhara’s Dream Come True? What Are the Challenges That He Faces?

Mizuhara is remembering her grandfather, who passed away, and she is crying in her room when she hears a knock on the door. Mizuhara is surprised to see Kazuya waiting for her in front of the door when she opens it. He did not utter a single word as he forced his way into her flat despite Mizuhara’s best efforts to prevent it. She quickly discovered the cause for his peculiar temperament after noticing that it was very strange to her.

When Kazuya shows her his laptop, she finds a page on a website that facilitates crowdsourcing. He tells her that he wants to assist her in the production of an independent film so that she can show it to Sayuri’s grandmother. Given the little amount of time that is available, this is the only way that she will be able to grant her grandmother’s wish. He argues that even for a low-budget movie, they should be able to generate a respectable number of money using the website.

The crowdsourcing website already has 200 applications that are comparable to yours, and of those, over 70 percent of them managed to generate money within the allotted time frame of 30 days. As a result, Kazuya has a high level of confidence that his strategy will, in all likelihood, be successful. The concept appears to be highly compelling; yet, Mizuhara and Kazuya’s most significant obstacle is meeting the deadline for the completion of the film.

As was just indicated, it will take around one month to raise the necessary funds, and after that, the production process can take anywhere from one to two more months of consistent effort. The state of Grandma Sayuri’s health makes everything even more complicated because no one is entirely sure how much longer she has to live. Therefore, it is absolutely necessary for them to complete the independent film as quickly as humanly possible. 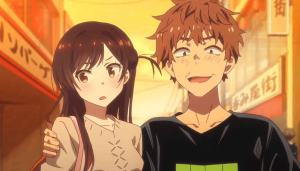 Does Mizuhara Accept Kazuya’s Help to Make a Film?

After discussing his notion with Mizuhara, Kazuya goes back to his room to reevaluate the entire operation in its entirety. While all is going on, Mizuhara is taking her time to mull over the concept of crowdsourcing. After she has given things some consideration, she goes and knocks on Kazuya’s door to ask for his assistance in making the movie. After receiving Mizuhara’s approval, Kazuya’s self-assurance skyrockets to unprecedented heights. In spite of the fact that she mocks him for being stupid for going to such lengths, she truly appreciates all of the assistance that he is prepared to do for her.

Reiji Miyajima is the author and illustrator of the manga series Rent-A-Girlfriend, which is published in Japan. Since July 2017, it has been published as a serial in Kodansha’s Weekly Shonen Magazine, and as of September 2022, it has been compiled into a total of twenty-eight volumes. Kodansha USA holds the rights for the series in North America, and they will publish the first volume of the series in English in the month of June 2020.

This story was adapted into an anime television series by TMS Entertainment, and it aired on the Super Animeism block on MBS from July 2020 through September 2020. From July to September of 2022, a second season was shown. It has been confirmed that there will be a third season. A premiere was also held in July 2022 for the adaption of a live-action television drama.

After going together with each other for a month, Kazuya Kinoshita’s girlfriend Mami Nanami breaks up with him. He makes the decision to hire a girlfriend named Chizuru Mizuhara, who is an attractive young woman, using an online dating app. On the other hand, he gives her a poor rating since he believes that she was being dishonest. When Chizuru scolds him for it at their subsequent meeting, he discovers that she is a far more cruel person than he had anticipated. At that very moment, Kazuya finds out that his grandma has been taken to the hospital after suffering a fall. When Chizuru enters the picture, his grandmother is completely taken aback by how wonderful she is. In order for Kazuya to maintain appearances with his family and friends, he continues to rent Chizuru. However, matters become more problematic when it is discovered that the two of them attend the same college and live next door to each other in an apartment. After some time, additional women from the rental girlfriend industry join in as well.

7 Movies Like I Used to Be Famous You Must See