Episode 2 of “Reincarnated as a Sword” or “Tensei shitara Ken Deshita,” titled “The Hellish Trial at the Adventurer’s Guild,” can be found in “Tensei shitara Ken Deshita.” Fran comes to the aid of an adventurer who has been ambushed by goblins, who in turn assists her in reaching Alessa town. After arriving at her destination, the Black cat-girl goes to the adventurer’s guild in order to sign up for the guild card and officially become an adventurer. The following provides detailed information regarding the conclusion of the second episode of “Reincarnated as a Sword.” 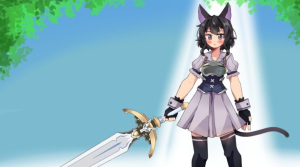 Reincarnated as a Sword Episode 2

Reincarnated as a Sword Episode 2 Recap

The parents of Frans had a strong desire to progress and, despite the risks involved, they made the decision to undertake an endeavor that appeared to be unachievable. Despite the fact that they worked themselves to exhaustion, they were unable to accomplish what they set out to do and died as a result. Now, Fran has a plan to make their dreams come true, and given that she will have the magic sword with her, there is a good chance that she will be successful.

The odd couple comes upon an adventurer by the name of Randell who is being attacked by goblins and is doing his best to defend himself. Fran does not pause for a second before leaping into action without any hesitation. She kills each one of them in succession, and in the end, she is successful in rescuing Randell without causing him any harm. Because Randell has come to the conclusion that she can be of assistance to him and provide him with protection, he makes the offer to take Fran to Alessa town for free; however, thanks to the magic sword, Fran is able to see right through his scheme.

Despite this, Fran decides to accept Randell’s assistance. The first person learns about explorers while the second gets to know the other a little better as they travel together. She determines that because the job immediately strikes her as exciting, she would work as quickly as possible to get her guild card. On the other hand, when they arrive in Alessa, the magic Sword is taken aback by the large number of weapons that have superior statistics. Fran tries to convince her that he is unique and different from the others by telling her that he is not like any of them.

After that, Fran goes to the adjacent Adventurer’s guild, where she talks to Nell, who works as a receptionist. Nell immediately has skepticism about the ability of the black Cat-girl as she reveals to her that she intends to register herself. She explains to Fran that the test is going to contain a lot of risks, and that the guild won’t be responsible for her if she gets gravely hurt during the exam. Fran is unfazed by these words of caution because she is determined to obtain her guild permit.

Reincarnated as a Sword Episode 2 Ending: Does Fran Pass the Adventurer’s Guild Exam?

Fran is escorted by Nell to an influential Oni by the name of Donadrond, who will evaluate her skills and make the final determination as to whether or not she should be granted the guild card. Nell is aware that the atmosphere of the examiner is scary, and she is also aware that it is sometimes more than enough to exclude candidates who do not appear to have any promise. Fran, however, is unfazed by Donadrond’s attempt to show off, which comes as a surprise to her. The magic sword is aware that the examiner possesses a great deal of power and advises Fran that she should not hold back during this round. The members of the adventurer’s guild who witnessed the black Cat-girl register for the test are of the opinion that she will not fare well in the competition and that she will be eliminated quite quickly.

As soon as the battle starts, Donadrond makes use of his greater speed to surprise Fran on many occasions, and she hardly has any time to react to his moves. The examiner is unrelenting in his pursuit of Nells, and one of his assaults is so potent that even Nells believes he is going too far with it. Because Fran was able to lessen the force of the collision with the sword, he was spared serious injury. Donadrond is astonished by her level of awareness and presence. In the meantime, the Sword makes the decision to employ a form of supporting magic that momentarily boosts Fran’s STR and AGI. The superiority of her swordsmanship allows her to inflict a cut on the examiner’s biceps during the subsequent attack she launches.

Donadrond has the impression that despite the fact that her abilities are remarkable, they won’t be able to save her for very long. The results of the evaluation, sadly, turn out to be quite wrong. The examiner is taken aback when Fran, with the assistance of her magic sword, begins using magic in addition to her previously demonstrated proficiency with the sword. In the meantime, Nell is perplexed since she feels that in order to use both at the same time, one would need two brains. After that, Donadrond does not have much longer to live, and by the time the test is over, Fran is standing tall while the examiner is buried under the rubble.

Following the examination, Donadrond and Fran travel to speak with the guild master Klimt, who, like Donadrond, is amazed by the extraordinary powers exhibited by the black Cat-girl. After that, her mana wavelength is examined, and Nell is astounded to find out that she is suitable for more than one class and can excel in any of them. Fran, on the other hand, opts for the Sword-mage class enhancement, which ultimately results in her obtaining both the adventurer registration and the guild pass. Following that, she is rewarded with gold in exchange for the various monsters that she has slain. Unfortunately, a number of the mercenaries feel that she cheated, and as a result, they try to abuse her and humiliate the Cat tribe. Fran does not pull any punches and chastises them for pushing themselves beyond their capabilities. 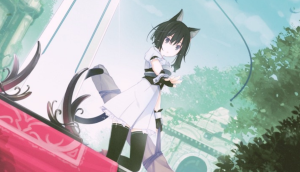 Reincarnated as a Sword

Reincarnated as a Sword

Tenken is the title of a series of Japanese light novels written by Yuu Tanaka and illustrated by Llo. The series is also known as I Became the Sword by Transmigrating (Tensei Shitara Ken Deshita) or Reincarnated as a Sword. In October of 2015, it was first published on the website of the Shsetsuka n Nar as a web novel. After that, it was turned into a light novel and published by Micro Magazine, which brought out the first volume in July of 2016. Both Tomowo Maruyama’s adaptation of the series as a manga, which was published by Gentosha, and Hinako Inoue’s spin-off manga, which was published by Micro Magazine, have been adapted from the series in manga form. Seven Seas Entertainment received licenses to publish the light novels, manga, and spin-off in North America, and they did so under a variety of different titles. In October 2022, the first episode of C2C’s anime version of a television series was shown.
Also read: Post Credits Of Rick and Morty Season 6 Episode 5 Explained

Following his death in a vehicle accident, the protagonist discovers that he has been reincarnated in another planet as a sword. He has no recall of his former life, other than the fact that he was a sword. However, he does remember everything else about his prior existence. After coming to terms with his destiny as a sword, he started looking for someone to take control of him. He comes into a group of slave traders whose caravan is being attacked by a bear with two heads. Fran, a young catgirl who is a slave, finds the sword and uses it to slay the bear. She gives the sword the name “Teacher” once she has been liberated from servitude, and the two of them then go on an adventure together.