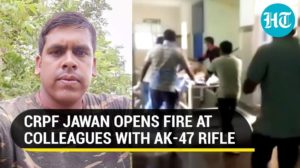 On Monday, November 8th, 2021, a Jawan was reported to have slain four of his coworkers in a heartbreaking tragedy. The CRPF revealed on Monday that the jawan who massacred four of his comrades and injured three others in an allegedly fratricidal incident in Chhattisgarh may have been suffering from “emotional stress” that led to a sudden psychological imbalance. According to accounts, shortly after the gunfight, Constable Reetesh Ranjab was “overpowered” by fellow highway patrol policemen at Lingalapalli camp in the Sukma district of the south Bastar region.

Who is Reetesh Ranjan From CRPF?

According to preliminary facts, Ranjan shot his colleagues using his service weapon, an AK-47 rifle, resulting in the deaths of four of his colleagues and the wounding of three more, according to IG Bastar Sundarraj P’s statement. The administration of Chattisgarh has ordered an investigation into the indiscriminate firing that occurred at the Central Reserve Police Force (CRPF) 50th Battalion camp in the early hours of Monday morning.

Two of the three jawans with significant bullet injuries were airlifted to Raipur for medical treatment, while one jawan was treated at Bhadrachalam, according to Sunil Sharma, SP Sukma, who spoke to the media. “We received knowledge about the firing incident at 2:30-03:00 AM in the night and immediately raced for rescue,” the SP said. Despite our efforts to speed up the rescue efforts, two Jawans died on the scene, while the other two died from wounds sustained during the rescue operations.

Though, following the event, Jawan Reetesh, who had been charged for shooting at the camp, was captured immediately and his interrogation is proceeding, according to SP.

“The local police have initiated an investigation,” a CRPF official said, “and all legal measures will follow.” The CRPF has launched an investigation to determine the cause of the occurrence and recommend possible solutions. At first glance, it appears that constable Reetesh Ranjan lost control and opened fire on his coworkers as a result of some emotional tension leading to a sudden psychological imbalance.”

He further added that the CRPF deputy inspector general (DIG), the commandant of the 50th battalion where the shooting incident occurred, as well as other top personnel, are on the scene. Another officer reported that the arraigned Jawan was scheduled to begin his sentry post duties at 4:00 a.m., but shortly after getting ready, he discharged shots on his sleeping colleagues.

Among 4 killed, 3 Jawans belongs to Bihar

Meanwhile, the Chattisgarh authorities provided information on the deceased and wounded, stating that three of the four deceased Jawans are from Bihar and one from West Bengal. Dharmendra Kumar, Rajmani Kumar Yadav, and Dhanji are Bihar residents, while Rajib Mondal is a West Bengal resident who died in this incident.

Who was Reema Monga and what was her cause of death? Punjabi Model Died In Car Accident