Ravi Bishnoi is an all-round cricketer for the Indian national squad. He bowls right-handed leg spin. In 2020, he was a member of the Indian Under-19 World Cup team. Read more on Ravi Bishnoi Family Tree. 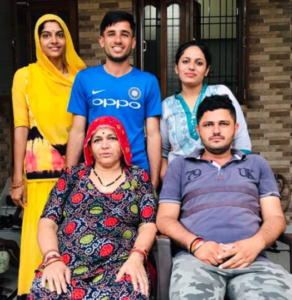 Ravi Bishnoi was born in the village of Birami in the Rajasthani district of Jodhpur on September 5, 2000. Mangilal Bishnoi, his father, is a cooperative teacher who holds the position of Headmaster. Ravi’s mother Shivri Bishnoi, his older brother Ashok, and two sisters, Anita and Rinku, make up his family.
Ravi received his primary education at Jodhpur’s Mahavir Public School. Ravi Bishnoi was born into a middle-class household. Ravi has loved cricket since he was a child. Ravi Bishnoi begins his professional cricket career at Jodhpur’s Spartans Cricket Academy, where he is coached by Pradyot Singh.

Ravi began his career as a fast bowler, but his coach persuaded him to switch to spin bowling. He was selected for two matches with the state under-16 team, but he did not participate in any of them. Ravi Bishnoi grabbed 15 wickets in five state association-organized matches in 2018. Despite taking five wickets and scoring a century in a National Board test, he was not selected for the under-19 team.

Bishnoi was selected in the Rajasthan team for the Syed Mushtaq Ali Trophy after receiving such rejections. He made his T20 debut against Tamil Nadu in the Mushtaq Ali Trophy in February 2018-19. He went on to play List-A cricket, the Deodhar Trophy, the Ranji Trophy, and the Under-19 World Cup after that.

Ravi Bishnoi was born and reared in the Rajasthani city of Jodhpur. Due to a lack of cricket culture and infrastructure in West Rajasthan, he created a cricket academy called Spartans Cricket Academy with the help of two instructors, where they did all the mason work themselves due to financial constraints so that he could train. He was once snubbed for the U-16 trials and twice for the U-19 trials before his coaches persuaded the selectors to give him another shot, and he was eventually selected for the U-19 Rajasthan squad. Rajasthan Royals called him up as a net bowler in March 2018.

The Bishnoi family and their early years

In many ways, Ravi Bishnoi’s storey is inspirational. His father was the principal of a government school in the area. On weekends, he and his brother used to go out and play cricket, but they had to make sure they were home before their father returned in the evening. His mother, on the other hand, was a huge cricket fan who used to watch matches when his father was in school. Because professional cricket had few facilities in Jodhpur, Ravi collaborated with several of his elder friends, Pradyot Singh and Shahrukh Pathan, to establish a cricket academy. Because of their financial difficulties, they did the mason work themselves. The academy took six months to construct, and they were terrified that their efforts would be in vain. Spartans Cricket Academy was the name given to it, and it served as the foundation for Ravi Bishnoi’s professional cricket career.

Ravi’s aggressive leg-spin bowling technique distinguishes him from other leg-spinners. Despite this, he was unable to secure a spot in the Rajasthan U-16 squad. Later, he was twice passed over by the selectors, therefore ending his prospects of joining the U-19 squad. Ravi put on an excellent performance after his coaches spoke with the officials to earn him one last chance to join the team. It was the start of his ascension to the top. In 2018, he was selected as a net bowler for the Rajasthan Royals. He was in a pickle because his 12th Board exam fell on the same day. Between his education and cricket, he had to make a decision. 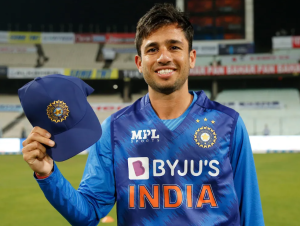 Ravi Bishnoi was born and raised in the Rajasthan village of Birami, which is near the city of Jodhpur. West Rajasthan didn’t have much cricket culture or facilities, so he, his friends, and two coaches built the Spartans Cricket Academy so he could train. They did all the mason work themselves because they didn’t have enough money to pay someone else. [4] The selectors turned him down once for the U-16 trials and twice for the U-19 trials before his coaches asked them to give him another chance. He was then chosen for the U-19 Rajasthan squad. In March 2018, Rajasthan Royals called him up to be a net bowler.

Kings XI Punjab bought him at the 2020 IPL auction in December 2019, so he could play in the 2020 Indian Premier League. On September 20, 2020, Bishnoi played his first game in the IPL against Delhi Capitals. His first wicket was Rishabh Pant, and he finished with 1/22 in four overs, but his team lost. [12] He had 12 wickets by the end of the season and was up for the Emerging Player award.

Bishnoi was picked up by the new team Lucknow Super Giants in February 2022. This was just before the 2022 Indian Premier League tournament. 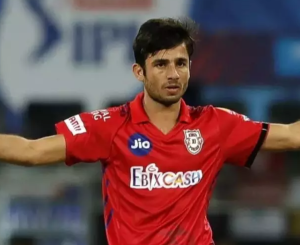 He was put on India’s team for the 2020 Under-19 Cricket World Cup in December 2019. In India’s game against Japan on January 21, 2020, Bishnoi took four wickets without giving up a run. He finished his eight-over spell by giving up four wickets for five runs. India won by ten wickets, and Bishnoi was named the man of the match. At the end of the tournament, he had taken the most wickets.

In January 2022, Bishnoi was named to India’s One Day International (ODI) and Twenty20 International (T20I) squads for their home series against the West Indies. On February 16, 2022, he played his first Twenty20 International for India against the West Indies. He took two wickets for 17 runs and was named the player of the match. [21] In October 2022, India put him on their ODI team for a series against South Africa. On October 6, 2022, he played his first ODI against South Africa.

Young Indian cricketer Ravi Bishnoi is known for his spin bowling. In the IPL, he has used spin to get rid of good batsmen. He got a spot on the Indian T20 cricket team in 2022. He played his first game on February 20, 2020, against West Indies at the Eden Gardens in Kolkata. From the start, it wasn’t easy for him to make a living as a cricket player.

He was born on September 5, 2000, in the village of Birami in the Indian state of Rajasthan. Bishnoi was born into a small middle-class family, and he liked to play cricket from the start. Even though his village didn’t have the most basic things needed to play cricket, he didn’t give up on his dream. Together with his friends and cricket coach, he built the Spartan Cricket Academy.

Because he was having trouble with money, he also did all the mason work himself to build the cricket academy where he could train. Once for the Under 16 trials and twice for the Under 19 trials, the selectors didn’t pick him. But after his coaches asked for one more chance, he was chosen for the Under 19 Rajasthan team.

He went to Mahavir Public School in Jodhpur for his early education. When Rajasthan Royals asked him to bowl in the nets in March 2018, he had already skipped his intermediate board exams. In February 2019, he made his home debut in the Syed Mushtaq Ali Trophy T20I series for Rajasthan. Then, in September 2019, he played in his first List A match, the Vijay Hazare Trophy.

He was on the India A team for the Deoghar Trophy in October 2019. He took 17 wickets in 7 games while playing for Rajasthan in the Vinoo Mankad Trophy. This was the most wickets any bowler took all season. He was put on the Indian Under 19 team for the ICC Under 19 Cricket World Cup 2020 because of how well he played.

Ravi took 17 wickets in the Under 19 World Cup, which made him the player with the most in the tournament. In IPL season 2020, Punjab Kings bought him for 2 crores after seeing how well he played. Bishnoi’s first game in the IPL was against Delhi Capitals on September 20, 2020. In his first season, he took 12 wickets and was put up for the Emerging Player Award.

He was still working with Punjab Kings in 2021. In January 2022, Bishnoi was added to the Indian team for the T20I series against the West Indies that was being played at home. On February 16, 2022, he played his first T20I against West Indies. At the IPL Mega Auction 2022, Lucknow Super Giants paid 4 crores for Bishnoi. He is giving IPL 2022 his all.

How much money Ravi Bishnoi has and how much he makes

Ravi Bishnoi has a net worth of around 9.5 crores. He was first bought by Punjab Kings in IPL 2020 for 2 crores, and he stayed with Punjab until IPL 2021 for the same price. But Lucknow Super Giants paid 4 crores for him at the IPL Mega Auction 2022. Aside from this, he gets 20,000 per match for playing domestic cricket for Rajasthan.