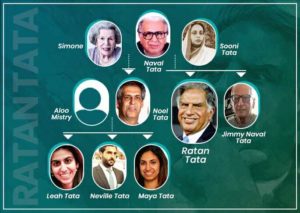 Born to Nusserwanji and Jeevanbai Tata on 3 March in 1839, Jamsetji Nusserwanji Tata was raised in a respectable but poor family of priests. Today, he is known to be an Indian leader industrialist, who launched the Tata Group, India’s largest conglomerate company. He has also established the city of Jamshedpur.

In addition to the Tata Iron and Steel Works, he went on to establish businesses in many other areas that stood as a foundation to modern Indian businesses.

Sir Dorabji Tata was the First Born of the visionary Jamsetji Tata, the Tata group Founder. Sir Dorabji Tata not merely inherited his dad’s business acumen, but also his spirit of selflessness and giving back to the society.

On May 27, 1909, Sir Dorabji Tata established the Indian Institute of Science, Bangalore, and made a contribution into the institute in 1912.

Back in 1919, he sent four athletes and 2 wrestlers to participate in the Antwerp Games.

Sir Nowroji belonged to a family that distinguished itself in industrial life, perhaps not just in India but also abroad. Though he had been linked to Sir Jamsetji Tata through his mother.

He started off as a Tata employee, as an apprentice in one of the mills on pay of Rs 50 a month. However, within a few years, due to his hardwork and determination,promoted to manage the mills department.

Within a limited time-span, word spread around Sir Nowroji’s exceptional work in the mills department along with his understanding about this industry which led him to become the chairman of the Bombay Millowners’ Association in 1917.. Although Sir Nowroji had long ceased to wear his workman’s shirt, he was seen as an invaluable asset.

A man who had not been afraid to speak his mind or accept responsibilities. It did not come as a surprise if he was chosen to steer the Tata group after Sir Dorabji passed in 1932.

Within a year after his father’s demise, he took his place as manager of Tata Sons, the group’s flagship firm. Tata surrendered his French citizenship in 1929 and that exact same year he became one of the first Indians to obtain a commercial pilot license.

During the next half century tata strengthened existing businesses such as steel, power, and hotels while also driving the group to market its own interests to include materials, cars, pharmaceuticals, financial services, along with information technology (IT).

He had been an early advocate of family planning. In 1971, he founded  the Family Planning Foundation. Tata received Numerous awards, such as the Padma Vibhushan (1957), the Daniel Guggenheim Medal for aviation (1988), and the United Nations Populace Award (1992).

In 1992, he received India’s highest civilian honour, the Bharat Ratna.

Ratan N. Tata has been the Chairman of Tata Sons, the holding company of the Tata Group, from 1991 until his retirement in 2012.

Mr. Tata is also correlated with numerous businesses in India and overseas. He is the Chairman of the Sir Ratan Tata Trust and the Sir Dorabji Tata Trust, two of the greatest private-sector-promoted philanthropic trusts in India.

He is the Chairman of the Council of Management at the Tata Institute of Fundamental Research. He also serves on the board of trustees at Cornell University and the University of Southern California.

Mr. Tata initiated the Tata-Cornell Institute for Agriculture and Nutrition. It is a long-term research initiative emphasizing the structure and evaluation of advanced interventions connecting agriculture, food processes, individual nutrition and poverty in India.

The Authorities of India honored Mr. Tata with the second-highest civilian award, the Padma Vibhushan, in 2008.

He has been appointed Knight Grand Cross of the Most Excellent Order of the British Empire. In addition to this, Rockefeller Foundation has conferred him with the Lifetime Achievement Award.