It is unusual to see a girl riding a bike in India. In our country, it is a stereotype that only men can ride bicycles. Priyanka Kochhar, on the other hand, defied the norm. She became popular solely for riding superbikes and sharing her experiences on social media platforms such as Instagram and YouTube. 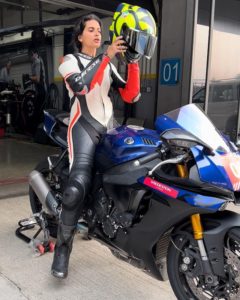 Priyanka Kochhar is a competitive bike racer who is a source of inspiration to her female admirers. She was born and raised in Pune, Maharashtra, and received her bachelor’s degree from Symbiosis University. She first rode a motorcycle when she was 16 years old, and she hasn’t looked back since. She is not only a cyclist, but also a professional racer and a one-of-a-kind among her Pune circuit. Her racing career began in 2016 when she joined the TVS Apache women’s racing team, and she has since pursued her passion for race tracks.

With over 50k subscribers on YouTube and around 500K followers on her verified Instagram account, she has a large fan base on Instagram and YouTube under the name Bikewithgirl. She has travelled to difficult places such as Ladakh and has represented India in races in Croatia and New Zealand.

From riding small bikes like the Apache RTR and Pulsar 180 in her early days to riding superbikes like the Ducati Panigale, BMW Motorrad S1000r, MV Agusta F44, KTM Duke 250, Triumph Street Triple RS, and many others, she has learned that racing is far more exciting than touring, and she enjoys taking short rides on her superbikes.

People Magazine Investigates: What are the names of the victims of Lewis Clark Valley murders?