Peter Michael Davidson, an American comedian and actor, has denied that he dated singer-songwriter Olivia O’Brien before he started dating ‘Bridgerton’ star Phoebe Dynevor in the year 2020. O’Brien said that they were together. 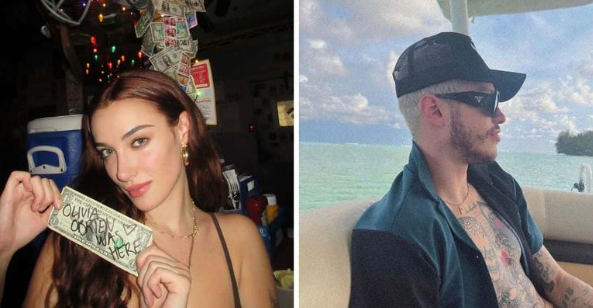 Even though Olivia O’Brien said in a text message that they dated before he broke it off, Davidson’s rep told E! that her story isn’t true. “This is not the case. We were friends and got together once, “said Davidson through his agent.

When Portnoy asked “what’s going on” between her and Pete Davidson, O’Brien said on the BFFs podcast that she was dating Davidson. Portnoy talked about the rumored relationship, and O’Brien asked, “What made you think that? What did you hear? “. Portnoy replied that it was a blind item on the celebrity gossip site Deuxmoi.

The pop singer said that she didn’t think “anyone knew about that,” but she didn’t say much else about their supposed relationship. But she did say that he broke up with her through text, and she also said that they went out in October 2020. “He texted me and was like, ‘I’m seeing someone else. So, I just can’t,’ “Olivia told us. The singer-songwriter also said that she liked the time they spent together “He’s really funny and very attractive. He’s also very nice. He is a very nice person.”

Pete dated Phoebe Dynevor for five months, from March to August of 2021, before he started dating Kim Kardashian. This was after she broke up with world-famous artist Kanye West and before she started dating Pete.

Kim Kardashian and Kanye West broke up for good in February 2021, and by March 2022, the SKIMS founder was “legally single.” Kim hosted Saturday Night Live for the first time in October. In November of last year, she and Pete shared a kiss on TV, which was the start of their unlikely relationship. The American socialite has talked about their relationship in recent interviews and on the new Hulu show about her family, “The Kardashians.”