Noah Beck is an American social media star, TikToker and soccer player based in Arizona. He gained fame by posting videos related to fashion and sports on TikTok. He has landed at Sway House and collaborated with famous TikTokers like Josh Richards, Bryce Hall, Griffin Johnson. Beck started his career as a Soccer player. He was a member of SC Del Sol club where he reached finals 4 times. He was also a member of Real Salt Lake Academy team. In 2014, he had joined as a captain in Olympics Development Projects and stayed there till 2017. He is a well known social media star and likes to post sports related material along with fashion, humor and lifestyle.  With over 8 million followers on Instagram and 1.59 million subscribers on YouTube his videos cross millions of views and likes. 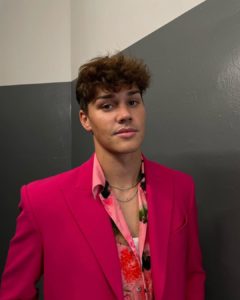 Noah was born on May 4, 2001 in an Arizonian town of Peoria. He is from a British-German ancestry and has American nationality. He follows Christianity. He is studying at University of Portland. He is from British-German ethnicity. His father is a businessman. His mother Amy Beck’s Instagram account is named as mommy3ggb. His two elder sisters Haley and Tatum are also popular TikTokers. His female cousin sister Holly Beck is also a well known TikTok star.

Beck started his career as a Soccer player, however, could not get continue the same. He started making TikTok videos in quarantine during Covid-19 pandemic and his first video got 20.5 k likes that was based on DaBaby’s song ‘”Rockstar”. He usually shares videos associated with lifestyle, skits and dancing. He has 1.9 Billion Likes. 29.8 Million Followers on famous video sharing and lip syncing app TikTok.

Beck gained fame after getting featured in a short series Noah Beck Tries Things on January 22, 2021. Six episodes were premiered by Awesomeness TV in which his fiancé and friends were also featured. In March 2021, he was featured on digital cover of VMan magazine which focuses on men’s fashion.

He is believed to be dating Dixie D’Amelio since 2020. She is also a well known TikToker and a Social Media  entertainer.

Beck’s net worth is estimated to be $5 million in 2021 approximately. His main source of income is from his social media accounts via sponsorships and endorsements promoting different products.