Athena is a French drama film that was directed by Romain Gavras and was produced by Netflix. The narrative recounts the events that lead to the outbreak of violence in a suburb of Paris following the untimely passing of a young child of 13 years of age. In the midst of the community’s growing outrage and demand for justice for the small child, his three older brothers are forced to deal with their own unique challenges as they look for the boy’s murderer. The brothers, who disagree on many philosophical issues, each come to their own conclusions, which ultimately lead to terrible and unfavorable outcomes. Here is everything you need to know about what happened to the boys and who the killers were in the show “Athena,” in case you were curious about any of those things. SPOILERS AHEAD! 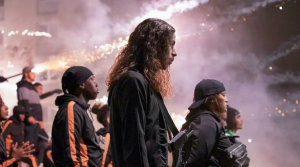 The first events of ‘Athena’ take place in the wake of the passing of Idir, a Muslim child who hailed from a suburb in Paris. The neighborhood reacts violently to the news of his passing, and the already tense situation quickly escalates to a more dangerous level. Abdel, the older brother of Idir, is a decorated soldier who served in the armed forces. He employs diplomatic means to resolve the problem and gives the authorities responsibility for investigating the circumstances surrounding his brother’s death. However, there is reason to believe that police officers were involved in the murder of Idir, which is the principal source of hatred among the community.

Karim, Idir’s other brother, leads a group of rebels during the demonstrations and steals firearms from the police by using Molotov cocktail bombs. During this time, the demonstrations are taking place. The insurgents have taken refuge in the Athena Estate, armed themselves, and displayed an extreme reaction to Idir’s passing there. Karim goes to his oldest brother, Mokhtar, who works as a drug dealer in the area, for assistance. Mokhtar, on the other hand, is exclusively concerned with his drug operations and refuses to take a position on anything. In another location, Abdel is in charge of leading the evacuation of civilians from a nearby city hall. Abdel’s mother does not know where her son Karim is now located, therefore she has asked Abdel to watch out for him.

Idir was killed as a result of police officers using batons and beating him while he was on the ground, according to a news story that was broadcast on television. The inquiry being conducted by the police raises the likelihood that the individuals who detained and abused Idir were not actually officers of the force. They are, in fact, participants in a small far-right organization that is at the epicenter of the anarchy that has taken place within the Athena council estate. In the meantime, Karim and his comrades are holding a police officer by the name of Jerome as a hostage. The rebels want the policemen who were responsible for Idir’s death in return for Jerome. Abdel makes an offer to negotiate with Karim, but the cops tell him to back down and stop trying to bargain. In addition to this, they have threatened to arrest Abdel if she does not comply with the directions given by the police.

Despite this, Abdel goes into the Athena estate in the hopes of talking things out with Karim and finding a peaceful solution to the problem. Abdel and Karim are eventually involved in an altercation, and Abdel takes advantage of the situation to escape with Jerome. Mokhtar is the one Abdel goes to for assistance now that the police and the rebels are looking for him. Abdel is given a place to stay by Mokhtar, much to the displeasure of Mokhtar. Mokhtar discloses to Abdel that he is Abdel’s half-brother during the course of the process. In an effort to clear his record, Abdel makes contact with the authorities and offers to turn over Jerome. On the other hand, Karim and his rebels get on the scene before the police do, which results in a bloody fight. Abdel takes a side with the rebels and fights for justice for Idir’s death as a result of the dramatic turn of events that took place.

Athena Ending: Why Does Abdel Join the Rebels? Is Abdel Dead?

During the handoff with the police, Karim and his squad of rebels attempt to take Jerome into their possession. Kaim will not consent to Abdel accompanying Jerome to the police station. The group led by Karim launches a vicious assault, and they threaten to completely destroy the establishment using their Molotov cocktail bombs. They persist in their efforts to release Jerome despite the fact that the police have refused to comply with the requests that Karim and his friends have made. As a result, Karim employs a Molotov cocktail explosive. However, Karim is shot by the police before he can shoot the device at them, and the bomb explodes on him as it does so.

As a result of the explosion, Karim loses his life, which has a significant effect on Abdel. The older brother is devastated by the death of another sibling, and as a result, his sense of right and wrong begins to shift. The traumatic experience of Idir’s passing has an effect on Abdel, and the death of Karim lets him recognize the evil that exists within police enforcement. As a direct consequence of this, Abdel comes to the conclusion that he must take up arms in order to pursue retribution for the murders of his brothers Idir and Karim. As a result, Abdel makes the decision to side with the insurgents and succeeds Karim as the group’s leader. The community’s mistrust of law enforcement is shown by Abdel’s switch of allegiance, which is a sign that anarchy is spreading throughout the Athena estate. Additionally, this illustrates how the community views police enforcement.

After Abdel has assumed leadership of the insurgents, he maintains his refusal to hand over Jerome. Before he will let Jerome go free, he places a demand on the authorities to hand over Idir’s murderers. During the course of the negotiation with the police, Abdel finds out that the individuals responsible for the murder are not officers but rather members of a far-right organisation. Abdel, on the other hand, does not trust them and warns Jerome that he would kill him if his demands are not satisfied. Sebastian, a member of the insurgent group, is making preparations to detonate a bomb in the building in which Abdel and the other insurgents are hiding out with Jerome.

As soon as the cops come, Abdel understands that his plan will never be successful. As a direct consequence of this, Abdel permits Jerome to leave and remains in the structure until it explodes. Abdel is unable to obtain justice for his siblings despite the fact that he has lost his moral sense. As a result of the failure of his plan, Abdel makes the decision to terminate his life alongside his brothers, which results in a terrible resolution to the strife within the family. The killing of Abdel is a symbol of the failure of the legal authorities and brings attention to the disparities that exist in law and order. In the end, the socio-political problems compel Abdel, a decorated military officer, to be dragged into the chaos and disorder that they generate.

How Did Idir Die? Who Killed Him?

The circumstances surrounding Idir’s passing are never explained in any detail during the course of the narrative. The residents of the Athena estate respond violently to his passing because of the tension it has caused among them. The film’s conclusion provides conclusive evidence regarding the manner in which Idir met his end. A number of law enforcement officials may be seen punching and kicking Idir in this scene. The small youngster was severely beaten by the authorities, and then they abandoned him to his death. After some time has passed, we witness the group taking off their police uniforms and then burning them. The scene gives the impression that the individuals were not in fact police officers, which is consistent with what the police department had believed.

In addition, when the men depart the scene, a tattoo that can be seen on their necks provides further evidence that they are members of the extreme right-wing gang that is suspected of being responsible for Idir’s death. As a result, the finale of the movie demonstrates that Idir’s killing was the direct result of a hate crime committed against the community. The film does not go into detail into the struggle that is taking place inside the local community; rather, the anarchic situation of Athena Estate is evocative of the present socio-political disagreements that are taking place all over the world, in particular in France concerning the Muslim community.

The conclusion of the movie makes it clear that the hatred that was stoked up among the nation as a direct result of political problems was the cause of Idir’s passing. On the other hand, Idir’s passing is only the spark that causes the community as a whole to descend into violent outbursts. The level of tension is already elevated, and it is possible that it will get even higher as a result of a group on the far right that is spreading hatred and manipulating events in order to create disharmony among the populace. As a consequence of this, the movie offers some social commentary on the current condition of police and the tensions that have arisen as a direct result of interactions between law enforcement and citizens across the country. On addition, because the source of the high tension in the Athena estate is not specifically addressed in the movie, the result is a representation of the most unsettling and terrifying path that humanity is capable of taking when trust is absent.

Is Netflix’s Athena Based on a True Story?