The young and dynamic Muskan Bamne is a well-known actress and a model. She came into limelight after playing the role of ‘Umaira’ in a movie named “Haseena Parker” released in 2017. The Indian television entertainer is also known for turning heads in television serials like Anupamaa, Bakula Bua Ka Bhoot and Super Sisters. Arguably the most popular actress in Madhya Pradesh, she has been active in the television industry since 2017. 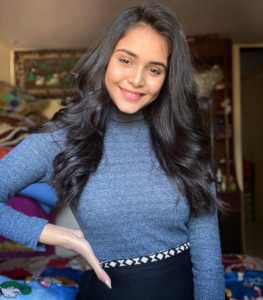 Muskan Bamne’s birthplace is Itarsi, Madhya Pradesh. She completed her primary education at St. Mary’s Malankara Syrian Catholic Higher Secondary School, Trivandrum. Muskan went to Bhopal University to pursue higher education. A talented dancer since childhood, Muskan can set the stage on fire. From the age of 3, she had already started her dancing training to become an able and nimble footed dancer. She developed the passion for dancing after following Mumbai’s film industry very closely.

However, Muskan Bamne’s journey started as a child artist with the short film Truth Encounter. Eventually, she debuted in the bollywood film Haseena Parkar in 2017, wherein she worked alongside a well-established actress in Shraddha Kapoor.

After moving one and all with her acting skills, she got an offer to work in Ekta Kapoor’s serial named Gumrah. Her journey started getting better after working in this show, and Muskan received several offers from top class television serials, including Haunted Night, Ek Thi Heroine, Super Sisters and Anupamaa.

Muskan started her career by featuring in a short film called ‘Truth Encounter’. She worked as a child artist and the film received an award at the Goa film festival.

She acted in quite a few episodes of “Crime Petrol”, before playing the role of a school student in a short film titled “Daayra” in 2016. Muskan played a supporting role of Dhabbu Mohit Raja, Mohits’s wife. She also featured in “Bakula Bua Ka Bhoot” later on.

Muskan Bamne debuted in the film industry by playing a key role in “Haseena Parkar” in 2017. She acted as ‘Umaira’, the daughter of Shradda Kapoor aka Hassena Parkar.

Some Facts About Muskan Bamne

Muskan’s family consists of just 4 members. Other than her parents, she has a younger sister named Simran, who is also an actress.