This one could be of interest to you if you’re looking for a murder mystery set in a western setting and that’s exactly what it offers. Murder in Yellowstone City is a murder mystery that takes place in a once-thriving gold rush town in Montana during the days of the Wild West. At the center of this sordid story is an unidentified killer who is responsible for several of the deaths. But who is responsible?

Cicero, played by Isaiah Mustafa, was a freed slave who ended up in Yellowstone City hoping for a means to escape his past and start a new life. He is in no way responsible for what happened. 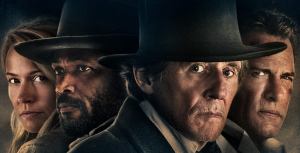 But when a local gold prospector named Robert Dunnigan is found dead not long after he has discovered the location of a gold mine, the mysterious newcomer to town quickly becomes the primary suspect in the case. He is taken into custody for the crime by Sheriff Jim Ambrose (Gabriel Byrne), but as you probably anticipated, more people are murdered while he is waiting to be punished for his claimed wrongdoings. Sheriff Jim Ambrose is played by Gabriel Byrne.

Since any of the citizens of the town may have had their sights set on Dunnigan’s claim to the gold, it is reasonable to believe that greed was the driving force behind the killings. But as the mystery unfolds, another possible explanation comes to light, and some of the local residents of the town, such as the stable hand Violet Running Horse (Tanaya Beatty), the clergyman Thaddeus Murphy (Thomas Jane), and the saloon owner Edgar Blake (Richard Dreyfuss), become key players in the complex but not overly convoluted plot.

You are going to be a bit disappointed if you are anticipating a story in the vein of Agatha Christie in which the identity of the murderer is not revealed until the very end of the film because, sadly, the identity of Dunnigan’s killer is disclosed somewhere about the middle of the film. If you are looking for a movie that is like a puzzle box, you might be let down by this one since the director, Richard Gray, and the writer, Eric Balgua, give away a few of clues that are too obvious to be considered a mystery.

Despite this, I don’t think it’s a waste of time to watch the movie. You are quite unlikely to experience boredom while viewing this entertaining story due to the presence of a talented cast, which also features Nat Wolff (Paper Towns) and Aimee Garcia (Lucifer), respectively. Because of the outstanding work done by the actors, “Murder in Yellowstone City” is elevated to a level well above that of the western B-movie it may have been if the cast had been comprised of less gifted individuals.

Yellowstone City undoubtedly has the appearance of a seedy town, what with its saloons, whorehouses, and run-down homes, and the town itself is just as much of a character as any of the mysterious people who choose to make their home there. The visuals of the town, together with the excellent performances, contribute much to the film’s overall sense of believability. The special effects near the opening of the film, when an explosive reveals the location of the gold, are less realistic; but, once the plotting begins and the primary mystery is introduced, it is easy to forget about this flaw in the filmmaking.

One further thing that works in favor of the film is that its gunfights are entertaining to watch and are staged in a way that is convincing. In addition, there are other chases on horseback that take place throughout the film, each of which is extremely exciting. If you are searching for some good old-fashioned western action in the mold of movies from the past starring John Wayne and Clint Eastwood, then you will probably love what the director has accomplished here.

However, there are some problems with the script. In addition to the central mystery, which is resolved a little too quickly, there are other times in the story that are a little unclear. For instance, there is a moment later on in the film in which Cicero breaks out of his cell, but we aren’t shown how he accomplishes it. When this deputy is reprimanded for not doing a good job, there is not a lot of explanation given, and we do not know a lot about the deficiencies of the guard who was supposed to be on duty either.

I have a sneaking suspicion that the problem lies in the editing, as it’s possible that some parts were eliminated in order to make the movie a more manageable length; on the other hand, it could just be poor storytelling. It’s a shame that Belgau’s screenplay, which is typically fairly intellectual and features some unique language and people who aren’t written as stereotypes, couldn’t have worked out better because of this.

I believe that you will enjoy this movie quite a bit if you are able to see past the film’s few problems and give it a chance. When I first heard about the movie, I did not have very high expectations for it, primarily because I believed it to be a low-budget western that featured a number of well-known actors for the purpose of attracting a larger audience. Both Thomas Jane and Richard Dreyfuss are performers who have worked their asses off in low-budget movies over the past several years. This is one of the reasons why I initially believed that this was just another movie that they had agreed to be in only for the sake of collecting a paycheck.

I was, thankfully, shown to be incorrect. Even while Murder at Yellowstone City is not considered to be a classic of the cowboy movie genre, it is still a lot better than many of the direct-to-streaming cowboy flicks that have tainted the genre in recent years, and you shouldn’t mix it with those movies.

There are various places online where the reviews for this one aren’t exactly glowing, but it’s possible that some reviewers have set their expectations way too high due of the impressive cast. It’s possible that you’ll like this movie more than they did if you can just adjust your expectations a little bit. I certainly believed that it was quite good, and if any ill-intentioned reviewer wishes to meet me at high noon for a critical showdown, I will gladly show up to meet them. I will also gladly turn up to meet them.

Murder At Yellowstone City (2022) Ending Explained – Does the Sheriff discover the killer’s identity?

Change Days Season 2 Couples: Who Decided to Stay Together and Break Up?