Mina Kimes is a well-known reporter, analyst, and columnist who writes about sports. She is currently the senior writer for ESPN The Magazine and appears on NFL Live as an analyst.

Kimes is from the United States. She has always wanted to write about sports, and now that she is an adult, she feels lucky to be able to do so. Since fifteen years ago, she has worked hard in the sports media business.

Kimes has worked for Bloomberg News, Fortune Magazine, and Fortune Small Business. The sports reporter loves the thrill of live broadcasting and talking to fans. She thinks it’s the best kind of reality TV and makes the most of every chance she gets.

This article about Mina’s family will talk about her marriage, her husband’s work and personal life, and the special relationship she has with her parents. Read on to find out more about the beautiful sports reporter. 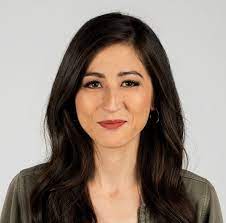 Who is Mina Kimes’s mom and dad?

On September 8, 1985, Mina Kimes was born. She recently had a party with her parents and other family members to mark her 37th birthday.

Omaha, Nebraska, is where the ESPN writer was born. But she is also proud of her Asian background, which she got from her mother.

Peter Winston Kimes and Sun-Min Kimes have only one child, Kimes (mother). She was born to parents from two different cultures, so she has experienced both Asian and American traditions.

Most of Kimes’ time has been spent in Arizona. But because of what her father did for a living, she had traveled a lot.

Kimes and her family moved to Arizona when she was a teenager. She went to Mesquite High School in Gilbert, Arizona, and then went to Yale University. In 2007, she got a Bachelor of Arts in English with Latin honors.

Mina Kimes’s American dad is very important to her.

Kimes is proud to call herself a “Daddy’s Girl,” even though she spent less time with her busy dad as a child. But her dad found time to teach her everything she needed to know, like how to drive. They also used to read maps together to get ready for geography bees.

She still remembers that her father used to bring her little bottles of shampoo from Motel 8s and Howard Johnsons.

Kimes has written about a fun time she had with her father on her website. She always wanted to be like her dad, and she took after him in that she was very driven and competitive. Kimes says that her father used to carry around a fake leather briefcase that he bought in Korea and wore a strange blue hat that looked like an envelope turned on its side.

She has said, “I remember when things started to get weird. I was 15 and learning to drive a car with my dad.”

“We lived in Arizona, where the roads are as wide as a football field and everyone calls cars trucks. I had inherited a Dodge Caravan, an ugly green box that smelled like shin guards. It was my second time driving with a license, so my father was with me, nagging me every few minutes about the angle of my mirror and how fast I braked. Her mother is from Korea.

Mina Kimes’s mother, Sun-Min Kimes, comes from the Korena people. She is in her seventies now, but because she is Asian, she still looks so young. In the same way, Mina says that she got many of her traits from her mother, who has a warm personality.

Kimes says that her mother taught her to love sports. Her mother has a clean Twitter account that shows how much Sun-Min loves sports, even though she is in her 70s.

Sun-Min calls herself a “Korean mom who likes sports, coffee, dogs, and movies” on her Twitter account, @sunminkimes. Her tweets match this description, as she often talks about NFL and Premier League. She also cheers for the English soccer team Tottenhamhot Spurs.

Kimes’ mother has 27.9 thousand people following her on Twitter right now. She is also on Instagram, where she mostly posts pictures of her daughter and grandson. Sun-Min resides in Mount Juliet, Tennessee.

Kimes Has An Elder Brother In Her Family

Issac Kimes, Mina’s older brother, is kind and caring. She lived in Arizona with her brother for most of her childhood.

Even now, the ESPN reporter and her brother are still very close. She even has a tattoo with her brother that is the same.

When Mina was young, she and her brother made a deal: if the Seahawks won the Super Bowl series, they would both get the same tattoo to remember it. After the victory, they both got a tattoo of the number XLVIII inked on their right bicep.

In an interview with SONY ESPN, Mina said, “My older brother and I made a deal: If Seattle ever won the Super Bowl, we would get matching tattoos to remember it.”

The brother of Kimes works as an attorney. The University of Memphis gave him a Doctor of Law degree.

Mina Kimes is married to a kind man.

Kimes is married to Nick Sylvester, a handsome man. They were dating for more than two years before they got married.

The wedding took place in Philadelphia, Pennsylvania, on September 19, 2015, and was a big event.

Nick is a musician and songwriter for a living. He started the development company God Mode, which is based in Los Angeles.

Sylvester has worked with Yaeji, JPEGMAFIA, and Channel Tres, among other artists. He also made the app BOUNCE, which is about music.

Sylvester’s mother plays the Wurlitzer from time to time, and his father is a drummer. On July 6, he was born in Philadelphia, Pennsylvania, in the United States.

At the start of his career, the musician played with bands at weddings and bar mitzvahs. Then he went to Harvard to learn more about computer music. After that, he moved to New York and met an American musician named James Murphy. Nick got better at making music with the help of Murphy. He eventually started Godmode Music with Tatya Ulitzer.

She Met Her Future Husband Via Mutual Freinds

Kimes and Nick met because they both knew the same person. In 2012, they finally started going out together.

Still, the two never have anything in common. So it might come as a surprise that Sylvester doesn’t like football as much as Mina does.

Kimes said a few years ago, “My husband went to St. Joe’s Prep and is from Montgomeryville. He is not a big Eagles fan, but my mother-in-law is. She always texts me about the Eagles and how nervous she is. She wears her Wentz jersey everywhere.”

Kimes has posted several pictures of Nick on her Instagram page since they met. However, she didn’t post his picture until June 28, 2012. In the same way, they have also been to many unusual places like Puerto Plata.

Kimes’s social media handle, @mina kimes, has 268 thousand followers at the moment. So, it looks like Kimes is living with Nick in Los Angeles.

Kimes wants to be a mom one day because she loves kids and animals so much.

With how busy she has been lately, the journalist knows she wouldn’t be able to spend enough time with her kids. So, she and her husband haven’t planned to have a child soon.

Isaac Kimes, her brother, is the father of two kids, Holden and Quinn. Mina loves her nephew and niece a lot.

Still, the couple has been taking care of a dog named Lenny as a pet. Kimes and their dog have both been on The Mina Kimes Show, which is a podcast.

What Mina Kimes Does for ESPN?

In 2014, Mina became a Senior Writer and Columnist for ESPN.

One of ESPN’s editors read a Tumblr post about a girl whose dad worked for the Seattle Seahawks. The girl became interested in sports after reading the post. In the end, she agreed to take the editors up on their offer to work as a senior writer.

In 2019, she got to host her podcasts like ESPN Daily and The Mina Kimes Show with Lenny.

In 2007, Mina worked as a reporter for Fortune Small Business Magazine. She showed that medical equipment companies did things that were not right. After that, she went to work for Bloomberg, where she wrote about business people like Doug Oberhelman.

While working for the publication, the journalist won a lot of awards. The National Press Club did something nice for her. The Society of American Business Editors and Writers also gave her a prize called the Larry Birger Young Business Journalist Prize.

Her Wealth and Salary in 2022: Net Worth

Mina Kimes is worth about $1 million dollars. In the last few years, she has done very well as a columnist and sports analyst.

ESPN is thought to pay Kimes about $400,000 a year at the moment. She has a big effect on the media world, but she is just starting out in her career, so she has a long way to go. Still, she made a lot of money because she worked hard and paid attention to her job.

Read More: Princess Rhaenyra Targaryen From the House of the Dragon:  Family Tree, Including Her Mother Aemma and Father Aemon Targaryen.

Megan Hackett: Who Is She? Facts You Didn’t Know About Nathaniel Hackett Wife

Who Is Chika Ikogwe From Heartbreak High? Facts You Did Not Know About The Actress