One of the things that keeps viewers interested in the medical drama series “New Amsterdam” on NBC is the sweet and endearing connection that develops between Dr. Max Goodwin and Dr. Helen Sharpe. When Helen makes the decision to go to London, Max even gives up his successful career in New Amsterdam in order to follow his partner there. When both Helen and Max are going through a bad patch in life or when they are facing any challenging circumstances, they provide tremendous support and comfort for one another. After coming to the conclusion that each other plays an essential role in their lives, they decide to formalize their relationship by getting married, but Helen abandons Max at the altar. Fans of “Sharpwin” must be scratching their heads in an attempt to comprehend why the couple decided to abandon their sweet love now that it has come to an end. So, why don’t we talk about it and see what everyone else thinks? SPOILERS AHEAD. 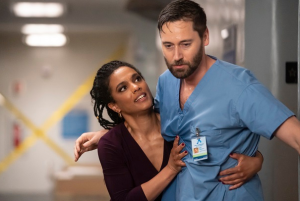 Why Did Max and Helen Break Up?

Helen writes a letter to Max in an attempt to make amends and explain why she walked out on their wedding while they were at the altar. Helen makes it abundantly obvious in the letter that even she does not understand why it was necessary for her to separate from him. The only thing that Helen can give to Max is the honest truth, which is that the cause behind their breakup cannot be explained. Helen is brave enough to follow her instincts and end a relationship with someone who means a lot to her, despite the fact that she is aware of how necessary it is. One thing that she is unable to do, however, is align words in a way that explains the motivations behind the same.

Throughout the course of their relationship, Max and Helen have to overcome a number of obstacles. The most important factor is probably Helen’s strong desire to settle down in London permanently. Helen is aware that Max’s life is in New York, despite the fact that he is willing to go to London with her without a second thought. Helen must have felt an unimaginable amount of pressure as a result of seeing him alter the very foundations of his existence, especially considering that Max was going to take Luna with him to London from the place where Luna’s mother had lived and passed away. Helen must have desired for Max to continue living his life in New York, and the breakup of the partnership may have been the price that had to be paid for this to happen.

In addition to this, it’s possible that Helen desired to lead a life that she had created for herself. Helen may find herself in an unneeded position of debt due to Max’s involvement to the same. Helen has spent her entire life allowing other people, particularly her mother, to dictate her behavior in one way or another. Helen may decide that she wants to break that pattern in order to be more independent once she moves to London, even if doing so requires her to cut herself off from Max’s presence and support. All of these arguments and considerations must have built up over time to prevent Helen from committing to Max in the form of a marriage, which ultimately prepares the road for the two of them to end their relationship.

In spite of the fact that Helen does not provide an explanation at this time, it is possible that we will find out what it is in one of the next episodes of the fifth season. “It is not quite evident why she [Helen] left from that letter, and I think that’s potentially something we’re going to get into later,” Max actor Ryan Eggold told TVLine. “I think that’s perhaps going to be something we’re going to get into later.” As Eggold said, Helen may take some time to collect her thoughts and attempt to make sense of the situation in order to communicate in a straightforward manner the reasons why she and Max had to part ways. Up until then, Max would most likely make an effort to avoid becoming mired in the past. It’s possible that his developing friendship with Dr. Elizabeth Wilder may help him cope with the hole that Helen’s absence will leave in his life even more.

Because Freema Agyeman, who played Helen on the program, left following the end of the fourth season, the authors of the medical drama may have come to the conclusion that it is necessary for Max and Helen to end their relationship. As a result of the couple’s decision to go their separate ways, they now have the opportunity to explore the possibility of writing a love tale including Max and Wilder. Before the show comes to a close with the conclusion of the fifth season, we can have hope that we will find out why Helen broke up with Max and whether or not Max will get back together with Helen or Wilder, depending on whether or not there is still a chance for the couple to get back together. The fifth season finale will be the last episode of the show.

Also read: Vampire Academy: Will There Be A Second Season Of The Series?

The first episode of the medical drama television series New Amsterdam was shown on NBC on September 25, 2018, in the United States. The series is based on the book Twelve Patients: Life and Death at Bellevue Hospital, written by Eric Manheimer. Ryan Eggold, Freeda Agyeman, Janet Montgomery, Jocko Sims, Anupam Kher, and Tyler Labine are some of the actors who star in the series, which was created by David Schulner. It was reported in February 2019 that the series will be renewed for a second season, and the premiere of that season took place on September 24, 2019.
NBC announced in January 2020 that it would continue airing the series for a total of three more seasons. On September 21, 2021, the debut of the fourth season took place. It was revealed in March 2022 that the series will come to an end following its fifth season, which will consist of 13 episodes. On September 20, 2022, the premiere of the fifth and final season took place.