Magdalena Andersson who was elected as the first ever female prime minister of Sweden has resigned from her post after less than 12 hours in the top job.

Her step came after her Green Party quit her coalition. Magdalena Andersson, who is leader of the Social Democrats, told the speaker of parliament that she hopes she will be appointed prime minister again as the head of a single-party government. 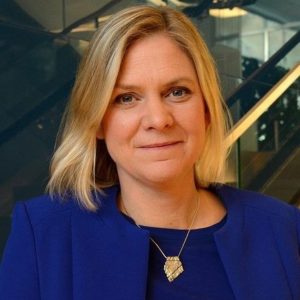 Magdalena Andersson (born 23 January 1967) is a Swedish Social Democratic politician who has been serving as the leader of the Social Democratic Party since 4 November 2021. On 24 November 2021 the Riksdag elected her as Sweden’s prime minister,and she was due to take office on 26 November.However, the collapse of her party’s coalition with the Green Party, itself triggered by the Riksdag’s adoption of the opposition’s budget proposal after the defeat of the coalition’s own budget, caused Andersson to resign a few hours after her election as prime minister.She then announced that she will seek the confidence of the Riksdag for a single-party Social Democratic government. If Andersson is confirmed by the Riksdag, she would become the first female Prime Minister of Sweden, thereby ending its status as the only Nordic country never to have had a woman serve as head of government.

Also Read: Floyd Mayweather: Who Disrespects Him In Japan? All About The Japanese Politician

During her high school years, Andersson studied social sciences at the Cathedral School in Uppsala. She graduated in 1987 with top grades in all but one class. After graduating from high school, Andersson moved to Stockholm to study at the Stockholm School of Economics, where she graduated in 1992 with a master’s degree in economics. She then worked as a doctoral student in economics at the Stockholm School of Economics in the years 1992–1995 but ended her studies in advance. In the autumn of 1994, she studied at the Institute of Advanced Studies in Vienna. In the spring of 1995, she studied at Harvard University.

Andersson joined the Social Democratic Youth League (SSU) in 1983, during her first year of secondary school.In 1987, she was elected president of the Uppsala section of SSU.

After being appointed to her current position by the Reinfeldt Cabinet, she served as Chief Director of the Swedish Tax Agency from 2009 to 2012. The Finance Ministry was split in two by the coalition partners; Andersson became Finance Minister, while Per Bolund was given responsibility for financial markets and consumers.

Andersson was nominated as the Minister for Finance by new Prime Minister Stefan Löfven in his cabinet following the Social Democratic victory in the 2014 Swedish general election, in which she was elected as a member of the Riksdag. While Andersson was granted overall authority for the Finance Ministry as a consequence of coalition negotiations, Per Bolund was assigned responsibility for the monitoring of financial markets and consumer protection as the Minister for Financial Markets. 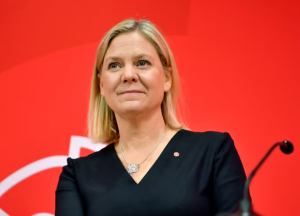 Also Read: Are Tea Leoni and Tim Daly Still Married? What Happened To Her and What Is She Doing Now?

Following the 2018 election, Löfven reappointed Andersson as Finance Minister. Members of the International Monetary and Financial Committee (IMFC), the IMF’s key policy advisory committee, elected Andersson as Chair of the Committee for a three-year term in 2020. After more than a decade, she became the first European in that post, as well as the first woman.

The Riksdag chose Andersson as Sweden’s new prime minister on November 24, 2021. She would have taken office formally on November 26, 2021, at the time of her election. Despite the fact that she did not earn a majority of “yes” votes, she was elected Prime Minister because a majority of those who did not vote against her due to abstentions. Since universal suffrage was implemented in 1921, Andersson would have been Sweden’s first female prime minister.

Popular As : economist and politician

Office: Minister for Finance of Sweden since 2014 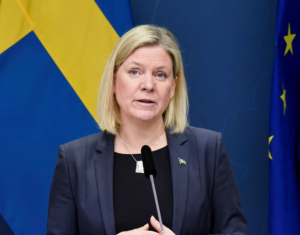 Andersson married Richard Friberg in 1997. Her husband is a professor in economics at the Stockholm School of Economics. The couple has two children.

Andersson is the only child of Goran Andersson, who taught statistics at Uppsala University from 1936 to 2002, and Birgitta Andersson, who was a teacher and was born in 1939. Andersson used to be a very good swimmer.

She went to Malmaskolan in Norby, which is part of Uppsala, when she was in first grade. During her high school years, Andersson went to the Cathedral School in Uppsala to study social sciences. She got top grades in all but one of her classes and graduated in 1987.

After finishing high school, Andersson moved to Stockholm to go to the Stockholm School of Economics. In 1992, she got her master’s degree in economics from that school. She started getting her PhD in economics at the Stockholm School of Economics in 1992 and didn’t finish it until 1995. As part of her PhD studies, she spent the fall of 1994 at the Institute for Advanced Studies in Vienna and the spring of 1995 at Harvard University.

In 1983, when she was in her first year of high school, Andersson joined the Swedish Social Democratic Youth League (SSU). In 1987, she was chosen to be president of the SSU group in Uppsala.

After she finished her studies in economics, Andersson worked at Rosenbad from 1996 to 1998 as a political adviser to Goran Persson, who was the prime minister at the time. From 1998 to 2004, she was the Director of Planning. She then worked for the government as secretary of state in the Ministry of Finance from 2004 to 2006. After that, she left to become a political adviser again, this time for opposition leader Mona Sahlin from 2007 to 2009. She left this job when the government chose her to be Chief Director of the Swedish Tax Agency, a job she held until 2012. She quit when the Swedish Social Democratic Party chose her to run for office in the 2014 general election.

Andersson with her first government budget in front of Stockholm’s Parliament House on October 23, 2014
After the Social Democrats won the general election in 2014 and Andersson was elected to the Riksdag, the new prime minister Stefan Lofven put her in his cabinet as Minister for Finance. As a result of coalition talks, Andersson was in charge of the Finance Ministry as a whole, while Per Bolund was given the job of Minister for Financial Markets to watch over financial markets and protect consumers. After the 2018 Swedish general election, Lofven put Andersson back in charge of finances.

After more than a decade, she was the first European and the first woman to hold that position.

Lofven said in August 2021 that he would step down as party leader at the November 2021 party congress.

Many people quickly saw Andersson as the most likely person to replace him. On September 29, 2021, the party’s nominating committee announced that Andersson had been chosen as the leader-designate before the congress. If the Riksdag accepts the designation, Andersson would become the first woman to lead Sweden and the first female prime minister in the world.

Head of the Social Democratic Party

The Swedish Social Democratic Party chose Andersson as its leader on November 4, 2021. She is the second woman to lead the party after Mona Sahlin.

Stefan Lofven, who was the prime minister at the time, officially quit on November 10, 2021. As part of putting together the Swedish government for 2021, the speaker of the Riksdag met with all of the party leaders on November 11. He then gave Andersson one week to put together a government. On November 23, it was said that Andersson had made a deal with the Left Party so that they would back her in the upcoming vote for prime minister. Since the Centre Party had already agreed to back her, Andersson had the support of the required number of MPs to become Sweden’s next prime minister.

Read More: Who Are Anoushka Sunak and Krishna Sunak? Rishi Sunak Children Ages and Net Worth