Ladeeda Farzana is a Jamia Millia Islamia student activist from India. She took part in the Citizenship Amendment Act demonstrations. Ladeeda was a member of the CAA protest committee that was formed on the Jamia campus. 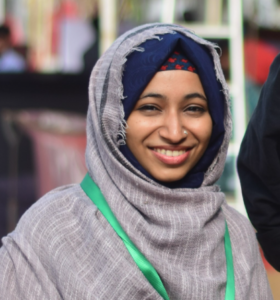 Farzana took part in anti-CAA protests at Jamia Millia Islamia University in Delhi on December 15. Visuals of her establishing a protective circle with her pals to safeguard a friend during the demonstration against the Citizenship Amendment Act (CAA) at Jamia on December 15 went viral, defying police threats of abuse. Ladeeda Farzana spoke at the “Million March” against CAA in Hyderabad on December 22, 2019, and delivered a short speech.

Shashi Tharoor authored an article denouncing such slogans in public protests and arguing that our relationship is defined as Indian by the Indian constitution. In response to Tharoor, Ladeeda Farzana sent a letter arguing that Indian secularism recognises everyone’s right to believe and practise religion, and that Islamophobia is at work among liberals.

At an event in Pune on Saturday, Ladeeda Farzana, a Jamia Millia Islamia student who has become the face of the protests against the Citizenship (Amendment) Act (CAA) and the National Register of Citizens (NRC), stated why she opposes the policies. Ladeeda is from Kerala, India, and is pursuing a BA in Arabic.