‘Love is Blind,’ a Netflix reality show, gathers together a group of 30 singles and puts them through a fast dating process in which they meet their potential match without ever seeing them. Once the couples get engaged, they meet in person, attend a couple’s retreat, and eventually settle into their daily lives.

When marriage is on the line, however, it is up to the parties to see if they can work out their differences or if they choose to end the partnership. Season 1’s Kelly Chase and Kenny Barnes showed a lot of promise, which piqued fans’ curiosity in their lives. So, how about we take a closer look and see if they’re still together? 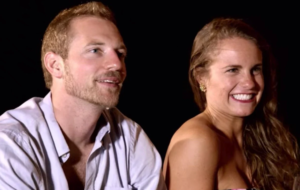 The Love Is Blind Journey of Kelly and Kenny

Even when getting to know each other in their separate “pods,” Kelly Chase and Kenny Barnes were fast to warm up to each other. They learned they shared same interests and were on the same page. It didn’t take long for them to connect on a deeper level because they both reciprocated each other’s feelings and were highly appreciative of one another. They made the decision to be exclusive and were looking forward to meeting each other. As a result, Kenny finally proposed to Kelly, who gladly accepted.

After meeting face to face, Kelly and Kenny were able to take their relationship to the next level and develop a stronger bond. They wowed fans and family members alike with their love and dedication to their relationship. While other relationships were collapsing and burning with high-octane drama, theirs remained a relatively drama-free love and trust relationship. The two made the most of every opportunity to reaffirm their love for one another, and their connection was unmistakable.

As the wedding day neared, fans were ecstatic to see one of their favourite couples, Kelly and Kenny, say “I Do.” Kelly and Kenny, however, unexpectedly decided not to go through with the wedding and instead split up at the altar. Fans were taken aback by this very abrupt decision, as there was nothing to suggest such a shift, and many struggled to comprehend why. You must be wondering about what happened to the lovebirds after that, right?

Also read: Jenna Johnson: Who Is She? Where is She Now? Did She Leave Dancing With The Stars?

Kelly and Kenny are no longer together, unfortunately. After agreeing not to marry each other, they went their own ways. Later, in an interview following the reunion special, they disclosed that the choice not to marry was not made on the spur of the moment, but rather weeks before the event. Kelly revealed in the reunion special that the two had planned to explore their relationship after filming, but Kenny dumped her. Kelly allegedly waited for him but received no response. That’s when she understood their relationship was finished.

Kelly and Kenny both moved on with their lives after filming in different ways. Kelly decided to concentrate on her life coaching business, ChaseLife, as well as her Instagram influencer job. She has her own podcast, ‘ChaseLife With Kelly,’ and appears to be committed to her objective of empowering women. Kelly appears to be single at the moment, with no news on her dating life and no mention of a particular someone on her social media posts.

Kenny, on the other hand, took a break from romance for a while until meeting Alexandra Garrison, his now-fiancée, through his younger sister. They got engaged in August 2020 and appear to be quite happy together. It’s also great to see Kelly and Kenny still have a good relationship, as the former even conveyed her congratulations when Kenny got engaged.

Also read: Tad Starsiak &Mina Starsiak Half Brother: Who Is He? How Rich Is Good Bones Producer? Net Worth Explored

The unscripted TV drama ‘Lovebirds See No Fault In Others’ on Netflix brings together a reunion of 30 singles and puts them through a speed-dating process in which they meet a possible accomplice without actually seeing them. As the two groups of people are ready to get married, they finally meet one another, go on a couples retreat, and even start to settle into their daily lives.

The parties of the relationship are responsible for determining whether or not they can work through their differences in order to save their marriage, which is in jeopardy as a result. Fans were ecstatic about Kelly Chase and Kenny Barnes’ lives during the first season as they shown an enormous guarantee early on in the show. In the end, we need to investigate and determine whether or not they are still attached, all right?

Love Is Blind: The Story of Kelly and Kenny’s Journey Even though they were working on their own “cases,” Kelly Chase and Kenny Barnes were eager to pick each other up when they ran into each other. They realised that they shared hobbies as well as a common grasp of things. Because they were both sensitive to the emotions of the other and highly animated around one another, it didn’t take long for them to begin interacting with one another on a more profound level. They made the decision to be picky, and they were quite excited to finally meet one another. Because of this, Kenny was finally able to make his proposal to Kelly, who was ecstatic to accept it.

Kelly and Kenny figured out how to take their relationship to the next level and connected the roots of a deeper partnership to the fact that they got to know each other on a more personal and intimate level. They exhibited a high level of responsibility and devotion toward their relationship, which won the hearts of their supporters and their relatives. In point of fact, even when other casual encounters were blown out of proportion by over-the-top melodrama, they managed to maintain a relationship that was affectionate and based on trust. The pair didn’t waste any opportunities to deepen their mutual trust, and their scientific reasoning was crystal clear.

The big day was getting closer, and the fans couldn’t contain their excitement to see one of their favourite couples, Kelly and Kenny, finally tie the knot. After giving it some thought, Kelly and Kenny decided against going through with the wedding and instead went their separate ways in the special tiered area. This turn of events was completely unexpected. Fans were taken aback by this decision, which seemed to come out of nowhere, given that there was nothing else to suggest in that circle, and they typically tried to comprehend its rationale. In a normal situation, he ought to have an interest in learning more about what happened to the couple after that event.

Do Kelly Chase and Kenny Barnes still have a romantic relationship? It’s a terrible shame, but Kelly and Kenny are no longer a couple. After making the decision that they would not be married, they went in a different way. They found out later, during a discussion that took place after the special meeting, that the option to not marry was not endless, but rather, it was something that they often determined several weeks in advance of the ceremony. At the special meeting, Kelly revealed that she and Kenny had intended to investigate her relationship following the incident, but Kenny ended that plan by breaking up with her. Kelly certainly stood up for him, but she did not receive a response to her actions. That was the moment when she had the realisation that their relationship was finished for good.

After production wrapped, both Kelly and Kenny went on with their personal lives in a variety of different ways. Kelly made the decision to concentrate on growing her life coaching business, which is called ChaseLife, as well as her vocation to become an Instagram superstar. She hosts her very own online talk show called “ChaseLife With Kelly” and appears to be very committed to her overarching mission of assisting women in leading more fulfilling lives. However, there are no reports on her love life, and Kelly does not appear to have a significant other based on the content she shares on social media, so it would appear that she is single at the moment.

On the other hand, Kenny took a break from his emotional life for a considerable amount of time before he became romantically involved with Alexandra Garrison, who he met through her younger sister. They take care of August 2020 and appear to have a really healthy relationship with one another. In addition, it is incredible to think that Kelly Kenny has managed to keep up a cordial relationship with Kenny despite the fact that Kenny’s past brought her nothing but good fortune as she prepared for marriage.

Are Giannina Gibelli And Damian Powers From Love Is Blind Still Together?