The Italian romantic comedy “Jumping From High Places” that is available on Netflix was adapted from the Italian fiction novel “Per Lanciarsi Dalle Stelle” written by Chiara Parenti. The title literally translates to “To Launch From the Stars.” The narrative of Sole Santoro, a young lady who suffers from serious anxiety disorders, is depicted in the movie, which was directed by Andrea Jublin. However, in the wake of her closest friend Emma’s passing, Sole makes the decision to face her phobias head on and undertakes a series of challenges that are designed to test her mettle.

During this process, Sole’s romantic life also advances, which is a positive development. Massimo, an old crush of Sole’s, reappears in her life at a time when she is desperately trying to win his affection. As a result, the audience must be thinking about whether or not Sole and Massimo end up together. Here is everything you need to know about the romantic future of Sole and Massimo in the show “Jumping From High Places,” if you are interested in finding out more about it! SPOILERS AHEAD! 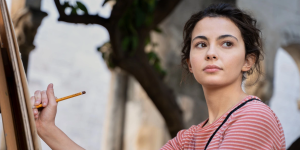 What Happens Between Sole and Massimo?

Sole and Massimo have known one other since they were children in the story “Jumping From High Places.” Both of them were raised in the same town, and Massimo is the brother of Emma, one of Sole’s closest childhood friends. Nevertheless, after finishing school, Massimo relocates to Milan and goes on to have a successful career as an architect. On the other hand, Sole is unable to overcome her anxiety and stays in Apulia, her homeland, because she is afraid to venture outside of her comfort zone. In addition to moving away, Emma is involved in a terrible vehicle accident and passes away. Following Emma’s passing, there is less communication between Sole and Massimo.

It comes out that Sole has had a secret crush on Massimo ever since they were kids. Massimo travels back to Apulia in order to deliver a letter written by Emma to Sole. In spite of the fact that she still has love feelings for Massimo, Sole is furious with him because he hid the letter from her for almost two years. As a direct consequence of this, the relationship between Sole and Massimo deteriorates. Nevertheless, when Sole makes more efforts to step outside of her safety zone, she begins to patch the rifts in her relationship with Massimo.

Do Sole and Massimo End Up Together?

As time passes, Sole is able to forgive Massimo for concealing the letter, and this allows their relationship to return to its previous state of equilibrium. In addition to this, Sole assists Massimo in repairing his friendship with Xavier, who is Emma’s spouse. Sole’s personality is slowly starting to shift as she gradually gains self-assurance and becomes more gregarious. In Massimo’s presence, she has shed her awkwardness and her shyness entirely. Because of this, Massimo finds himself feeling attracted to Sole. On the occasion of Sole’s 25th birthday, Massimo gives her a kiss and tells her how he feels about her.

Despite the fact that Sole has had feelings for Massimo ever since they were children, she rejects his attempts at a romantic relationship. Sole’s life is progressing in a positive direction, and she is no longer terrified of the obstacles that lie ahead. In addition to this, Sole gets to know Danio, a charming and thoughtful young man who is also an artist. The relationship between Sole and Danio becomes quite close, and Sole takes pleasure in spending time in Danio’s company. In addition to that, it appears as though Danio has romantic feelings for Sole.

Sole is afraid that if she gave in to her love for Massimo, it would indicate that she is clinging to the memories of the past. She has a different goal in mind, and that is to discover new opportunities in life. As a direct consequence of this, Sole is able to let go of the sentiments she had for Massimo. Despite this, the two decide to keep their friendship. The relationship between Sole and Massimo does not succeed in the end. After Sole undergoes a transformation in her personality, Massimo is finally able to fall in love with her. In addition, Sole’s journey of self-discovery would have been hampered if she had made the decision to seek a romantic relationship with Massimo.

Jumping from High Places: All About the Upcoming Italian Rom-Com Movie

This week, the Italian romantic comedy film “Jumping from High Places,” also known as “Per lanciarsi dalle stelle,” will be made available for streaming on Netflix. Andrea Jublin is the one in charge of the film’s direction, and Alice Urciuolo is the one responsible for the script. A young woman tries to conquer all of her phobias in order to regain her self-esteem in this humorous film. She does this in order to fulfill the dying wish of her closest friend.

The novel of the same name written by Chiara Parenti will serve as the basis for the film adaptation, which will have a duration of approximately 1 hour and 28 minutes. As the main protagonist works her way through the obstacles in her life, the subject of anxiousness as well as the process of coming into one’s own will be explored in the movie.

Also read: Colleen Foy Age and Career As She Stars As Pat On Netflix&Blonde

The film tells the story of Sole Santoro, a young woman with severe anxiety who was born and raised in Conversano, in Puglia, an idyllic dimension that, however, begins to feel constricted to her. The official synopsis of the film reads, “To honor her best friend’s last wish, a young woman with severe anxiety confronts her greatest fears to try and reclaim her life — and perhaps find love.”

Due to the fact that Sole has always struggled with anxiety issues, the decision to alter one’s life and go to a new location is not an easy one to make. For her, the smallest action, no matter how inconsequential it may seem to others, can feel like a herculean task. Emma, her best friend and the one person who could ever understand her and aid her, is no longer there. Emma was the only person who could ever understand and assist her.

She pens the letter to Sole, which the latter finally gets around to reading just a few days before she turns twenty-five. Her hope is that Sole will take risks in life and enjoy the independence she deserves. Sole will have to sit down and make a list of all of her anxieties, both big and small, in order to confront each one of them in turn. And from that point on, her journey turns into a journey of self-discovery, which will take her to places that, as is so frequently the case, she could never have envisioned going.

On October 5th, 2022, the movie is going to be made available only on Netflix. Have a look at the movie’s trailer down below.

Read more: Who Is Alexandra Turshen From Netflix Partner Track? 5 Facts To Know