Jumping From High Places is an Italian romantic comedy film that was directed by Andrea Jublin and can be streamed on Netflix. It is adapted from Chiara Parenti’s novel of the same name, which was published in Italian under the title “Per Lanciarsi Dalle Stelle” (roughly translated to “To Launch From the Stars”). The main character of the movie is a young woman named Sole Santoro who is terrified of almost everything in life. As a consequence of this, Sole has a hard time breaking out of her comfort zone and living the life that she has always wanted. However, following a terrible event, Sole decides to compile a list of the things that make her anxious and, with the assistance of her new friends, work toward overcoming her fears. Here is everything you need to know about the conclusion of Sole’s voyage of self-discovery, in case you have been wondering about it. SPOILERS AHEAD! 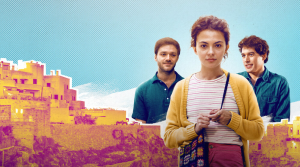 Sole, a little girl with significant anxiety disorders, is the protagonist of the film “Jumping From High Places.” It is difficult for her to step outside of her comfort zone. As a consequence of this, Sole is currently unemployed, does not have a boyfriend, and is still residing in her little coastal hometown. She will soon turn 25 years old. Sole explains that her best friend Emma was a big help to her when she needed to deal with her anxiety, and the two of them have plans to spend their entire lives together. However, after Emma found the man she would spend the rest of her life with, Xavier, she went away, and Sole was left all by herself. It is revealed through flashbacks that the two friends had a disagreement and were no longer communicating to one another at the time that Emma was killed in a vehicle accident.

Sole suffers emotionally as a result of Emma’s passing, and she consults a therapist by the name of Dr. Basille in order to work through her anxiety problems. Massimo, Emma’s brother and the boy Sole had a childhood crush on, has returned to the city in the meantime. He delivers Sole a letter that Emma had written a few days before she passed away and that she had given to him. In the letter, Emma tells Sole that she does not want to lose her because of a little quarrel, and she then wants Sole to write a list of the things that scare her the most. Last but not least, Emma affirms that she will finish the list with Sole.

Sole gets together with Miriam, one of her best pals from her younger years. She then gives the letter to Miriam, who advises Sole that the list should be finished and that she should honor Emma. In addition, Miriam is the one who presents Sole to Danio, Giulia, and Marta. Sole decides to do all of the activities on the list with the assistance of the new friends she has made. Sole is offered a position working at a restaurant owned by Miriam’s mother. In spite of the fact that Sole is dubious about working as a waitress, she decides to take the position and checks off the first thing on the list.

During the process of finishing the list, Sole becomes closer to Danio because they both have a passion for drawing. On the other hand, the problems that have been lingering between Sole and Massimo begin to be resolved. Sole gradually sheds her image of being clumsy and begins to develop greater self-confidence with the assistance of Mariam and her other companions. Sole comes to the conclusion that she has completed the most of the tasks on the list on the occasion of her 25th birthday, after which she adds a few more. In the meantime, Sole is also dealing with a difficult situation because Danio and Massimo both appear to have romantic feelings for her. In the end, Sole comes to the conclusion that she is the only person who can determine her path forward and the decisions that affect her life.

Also read: How Do Kelly Mi Li and Simu Liu Know Each Other? Her Net Worth & Family

Jumping From High Places Ending: Why Does Sole Move to Rome?

At the beginning of the movie, Sole has a crippling phobia of getting close to anything, which causes her to create obstacles for herself. She struggles with significant anxiety, which makes it difficult for her to try new things and be open to new experiences. As a consequence of this, Sole begins to question who she truly is and has difficulty developing an identity for herself. This is also reflected in the fact that she has no promising professional prospects and a miserable love life. However, after Sole reads Emma’s letter, she begins to actively make changes to the way that she lives her life. She begins to accept her anxieties and gradually overcomes each one of them.

The maturation of Sole is demonstrated by the gentleness with which she is repairing her relationship with Massimo and the tenderness with which she treats Xavier. Sole is able to begin making progress in her life thanks to the affection and encouragement of her friends and family. In the end, she is granted her long-held dream that Massimo will view her in a romantic way for the first time. On the occasion of Sole’s 25th birthday, Massimo gives her a kiss and tells her how he feels about her. However, Sole is aware that in order to go forward, she must release the past, especially her feelings for Massimo. Despite this, they decide to keep their friendship.

After getting through practically everything on her list, Sole has come to the conclusion that she is finally prepared to move on to the next stage of her life. Since forever, Emma has desired that Sole accompany her to Rome. In addition to that, Miriam and the new companions she has made are currently residing in Rome. As a result, Sole experiences a strong pull toward the city and hopes to spend more time in Rome broadening her horizons. The fact that Sole has decided to go to Rome is symbolic of her decision to finally step out of her comfort zone and face the challenges that life has in store for her. In the end, Sole not only discovers love for himself, but also for Danio, who makes the decision to follow Sole to Rome. The movie comes to a satisfying conclusion as Sole, having become a more self-assured and daring version of herself, goes to a new city.

Read more: Sole and Danio: Do They End Up Together in Jumping From High Places?