Jenny Agutter OBE is a British actress who was born on December 20, 1952. In 1964, she debuted as a child actress in East of Sudan, Star!, and two versions of The Railway Children—the BBC’s 1968 television serial and the 1970 feature adaptation. She also earned an Emmy Award for Outstanding Supporting Actress in a Drama for her roles in the critically acclaimed films Walkabout and The Snow Goose (both 1971).

Agutter turned her concentration to television after returning to the United Kingdom in the early 1990s to focus on her family, and in 2000, she played the mother in a television rendition of The Railway Children. She has continued to work steadily in British television drama, most recently in the BBC’s primetime ratings success Call the Midwife, which she has appeared in since 2012. In 2012, she made a comeback in Hollywood with The Avengers, and she repeated her role in Captain America: The Winter Soldier (2014). 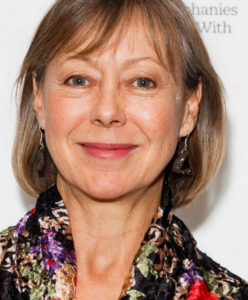 Agutter is the father of one adult son. She supports various charitable organisations, most of which are related to cystic fibrosis, a disease that her niece has, and was named Officer of the Order of the British Empire (OBE) for charitable services in the 2012 Birthday Honours.

Agutter was born in the English town of Taunton in the county of Somerset. She was raised as a Roman Catholic by her parents, Derek Agutter (a British Army entertainments manager) and Catherine. She grew up in Singapore, Dhekelia (Cyprus), and Kuala Lumpur, Malaysia (Malaya). When a casting agent was looking for a young English-speaking girl for a film, she was discovered at Elmhurst Ballet School, a boarding school she attended from the ages of eight to sixteen. He recommended her to the producers of East of Sudan, but she did not obtain the part (1964).

Agutter first appeared on television as Kirsty in the BBC’s twice-weekly series The Newcomers. Kirsty was the daughter of Eden Brothers’ new managing director. Eden Brothers was the fictional firm at the centre of the series. Agutter may only appear during school vacations. She was credited as Jennifer at this point in her career. She starred as a ballet student in Disney’s “Ballerina” in 1966. She starred alongside Julie Andrews as Gertrude Lawrence in the opulent big-budget 20th Century Fox film musical Star! in 1968. Agutter portrayed Pamela, Lawrence’s mistreated daughter, in that film. She went on to play Roberta in a BBC rendition of The Railway Children (1968) and in Lionel Jeffries’ 1970 film adaptation of the book. She then starred in the thriller I Start Counting, in which she had a more serious part (1969). She also won an Emmy for her work as Fritha in a British television rendition of The Snow Goose, for which she received a supporting actress nomination (1971).

Agutter met Johan Tham, a Swedish hotelier who was a director of Cliveden Hotel in Buckinghamshire, at a 1989 arts event in Bath, Somerset. Their son Jonathan[21] was born on December 25, 1990, after they married in August 1990. Agutter resides in London but has a strong connection to Cornwall, having once had a home on the Trelowarren Estate on one of the Lizard peninsula’s parishes.

In the 2012 Birthday Honours, she was named an Officer of the Order of the British Empire (OBE) for her charity work.

Throughout her career, Agutter has been involved with a number of issues. She has worked to raise awareness of cystic fibrosis, a disease she believes is to blame for the deaths of two of her siblings. Her niece is afflicted with the illness. Call the Midwife aired an episode about cystic fibrosis after Agutter suggested it. She has also volunteered for organisations, including the Cystic Fibrosis Trust, which she is a patron of (she is also a carrier of the genetic mutation). Agutter was also one of 200 public personalities who signed a letter to The Guardian in August 2014 expressing their hope that Scotland would vote to remain a member of the United Kingdom in the referendum on the topic scheduled for September 2014.