Following the assassination of Donald Foster by Jean Sinclair in Salt Lake City, Utah, in January 1963, the documentary “Deadly Women: Jilted and Jealous” on Investigation Discovery examines the case. She was convicted of the murder and received a life term in jail after being found responsible for the death of the former lover of the woman who she claimed to love. Do you have an interest in Jean, and do you want to learn more about her? Then, let’s find out, shall we? 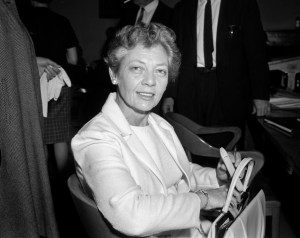 Who is Jean Sinclair?

On May 28th, 1917, Isabelle Geraldine Sinclair was brought into the world by her parents, Peter Lamond Sinclair and Ollie Jennie Hooker Sinclair. After she graduated from high school, she began to refer to herself as Geraldine and then changed her name to Jean M. Sinclair at some point. In 1963, Jean managed a nursing home in the Salt Lake City area. At the time, she was approximately 45 years old. According to the evidence presented in court, she was a determined person who had a clear attraction to the more masculine aspects of society. Due to the fact that she had such a strong will, her friends and acquaintances referred to her as “King,” and she dressed in clothes that were more masculine in appearance.

The public perception was that she was involved in a romantic relationship with LaRae Peterson, and as a result, she had severe feelings of resentment toward Donald Leroy “Don” Foster, according to the documents filed in the court case. Don had an affair with LaRae, despite the fact that he was already married to another woman. Jean, who was LaRae’s purported lover and admirer, did not approve of the affair. According to the testimony provided in court by a number of her friends and associates, she nursed a tremendous anger towards Don. She was determined to fulfil her goal of separating the two in any way possible and even suggested numerous unethical means to accomplish this.

According to her colleagues Vaughn Humphries and Karl Kuehne, Jean had the idea to try to end the affair by “drugging her (LaRae), stripping her, and putting on “the Lesbian act” in a scenario where Foster could witness it.” This was according to the information provided by her friends. She had also recommended that they try to scare Don away by holding a knife to his private parts and threatening to castrate him, or that they take the guise of a tribe of early Utahns who were known as Danites and castrate him. Both of these ideas had been brought up by her. According to Karl, Jean had even discussed how Don “needed to be killed” in the fall of 1962 and made multiple offers of $500 to Karl to kill Don. She also allegedly discussed how Don “ought to be slain” in the spring of 1963.

When Karl repeatedly declined to take her up on her offer, Jean made him travel throughout town in search of Don so that she could allegedly murder him. Jean did this multiple times. She managed to convince him to purchase her a 12-gauge shotgun and some ammunition during the final week of December 1962 by telling him that she was going shooting on a farm. On January 4, 1963, Jean gave him the firearm, had him saw off the barrel, and then dropped him off at his house with the firearm and ammunition at approximately eleven in the morning. According to the accounts, she was wearing boots and grey men’s jeans, and she had a trench coat wrapped around the shotgun she was carrying.

On the morning of January 5, 1963, Don and LaRae had just gotten back from seeing a movie in the wee hours of the morning. They were in the process of pulling into the parking area behind the Don’s Susan Kay Arms apartments in Salt Lake City, which is located between 5th and 6th North on 2nd West. He had just gotten out of the car and was reaching back to grab his coat from the back seat when Jean pulled out a shotgun and fired several shots at close range, striking him in the face and neck. The following morning, at approximately one in the morning, she went back to Karl’s house and announced, “Well, I killed the son of a bitch.”

Jean then proceeded to intimidate Karl in order to get rid of the murder weapon, and she threatened to incriminate him in the murder as an accomplice if he did not follow her directions or opened his mouth to anyone else about the incident. However, the detectives investigating the murder of Don were able to quickly apprehend Jean based on the statements of other witnesses who had purportedly seen her conduct the crime and depart the scene of the crime.

Also read: Wally Tatomir: Death And Obituary What Is The Cause Of The Equipment Manager&Death? How Did He Die?

In the end, investigators were able to apprehend and prosecute Jean Sinclair with first-degree murder. During her trial in April 1963 in the Third District Court, Karl was the major witness for the prosecution. She reportedly had an all-male jury, and the prosecution emphasised the alleged homosexual relationship she shared with LaRae as being the key motivation behind the murder. She was found guilty of first-degree murder and sentenced to life in prison. The jury came to the conclusion that the defendant was convicted on May 3, 1963, after deliberating for 17 hours, and they suggested that the judge show leniency. Jean was freed from jail on a $100 appeal bond less than half an hour after the sentence was handed down thanks to the efforts of her defence attorney.

In April of 1964, she was transferred back to the Utah State Prison after being given a life sentence by the judge who presided over her case. After serving almost nine years of her sentence, Jean suffered a stroke when she was incarcerated in the Weber County Jail. As a result, she was required to spend a number of months at a rest home located within Weber County. As a result of her poor health, she was released from prison on parole on May 15th, 1973. But sadly, Jean did not make it through the age of 56; she passed away on July 3, 1973.

Where is Netflix’s Shards of Her Filmed?