Inheritance, a 2020 thriller directed by Vaughn Stein, centres on the Monroes, a powerful political family that governs over New York City. Archer, the father, unexpectedly passes away and leaves Lauren, his daughter, a posthumous video message. As a result of following her father’s advice, she discovers a hidden subterranean bunker on the family’s property where she meets Morgan, a stranger who claims Archer has kept him imprisoned for thirty years. The daughter of the latter slowly starts to piece together the man’s story but suspects he may not be as innocent as he claims.

Lauren needs to find out the truth as quickly as she can to prevent her family from suffering the same fate as in the past. Lily Collins, Simon Pegg, Connie Nielsen, and Patrick Warburton are among the movie’s top performers; together, they improve the story’s gripping plot. Additionally, the opulent home of the Monroes, which is full of mysteries, serves as a captivating background to the tense narrative. So, if you’re curious about the precise location where “Inheritance” was filmed, here’s what we can tell you about it. 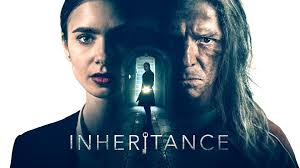 Also Read: Who Is Omri Katz Girlfriend Michele Walters? Why He Is Not In Hocus Pocus 2?

The entire state of Alabama, primarily Birmingham and Mobile, was used to film “Inheritance.” The Lily Collins-starring film’s principal photography began in late February 2019 and appeared to be finished by early April of the same year. Due to its urban and rural settings, as well as the alluring tax benefits for filming, Alabama, sometimes known as The Heart of Dixie, is a well-liked location for movies and TV shows. Let’s now explore each area that appears in the thriller.

Important scenes for “Inheritance” were recorded in Birmingham, the county seat of Jefferson County in north-central Alabama. According to reports, the cast and crew searched the city for a variety of ideal backdrops to record scenes. Birmingham, the third-largest city in the state, was established in 1871 as an important railroad and industrial hub. It now makes a significant contribution to banking, education, healthcare, transportation, and manufacturing.

Many films over the years have used Birmingham as a filming location, including “The Devil All the Time,” “The Fanatic,” and “Looking for Alaska.” Renowned ballet, opera, and symphony orchestra companies are based in the city, which also annually hosts important film and music festivals. The Alabama Jazz Hall of Fame, Birmingham Civil Rights Institute, Birmingham Museum of Art, and Vulcan Park are a few Birmingham attractions.

Later, the ‘Inheritance’ production crew travelled to Mobile, Alabama, which serves as the county seat of the same name county and is located on the Gulf Coast. The city was established by the French as Louisiana’s first capital in 1702 and is located on top of the Mobile River at the head of Mobile Bay. Due to its historical architecture and reputation as the Mardi Gras capital of the world, Mobile is a significant cultural hub. The Battleship Memorial Park, Mobile Carnival Museum, Condé-Charlotte House, Fort Morgan, Historic Blakeley State Park, and Mobile Botanical Gardens are the top tourist destinations in the city.

2008 saw the untimely death of Archer Monroe, the head of a prominent and rich political family in New York City. His younger son William, a politician up for reelection, his older daughter Lauren, the Manhattan district attorney, and his wife Catherine each receive a portion of his estate. Harold Thewlis, a family lawyer, secretly shows Lauren her late father’s video message to her. He claims in the video that he will reveal a secret to her that she must keep to her death. He leads her to the family’s property’s underground bunker. She discovers Morgan Warner, a captive who claims to have been held captive for 30 years, there.

Morgan alleges that up until the night they killed a person while driving drunk, he was Archer’s friend and business partner. They covered up the murder at Archer’s urging so that Morgan wouldn’t reveal it before Archer imprisoned him. In the intervening years, Archer revealed numerous secrets and treated Morgan like a confessor. Morgan shows Lauren the location of the pedestrian’s body’s burial as evidence. Along with finding Archer’s longstanding mistress, with whom he had a kid, Lauren also pursues Morgan’s leads and discovers proof that Archer used bribes to help his children win elections to public office. Finally persuaded to release Morgan, Lauren instructs Harold to open an offshore bank account and hire a private plane for Morgan’s escape after realising that he has been harmed.

Lauren collected a sample of Morgan’s fingerprints when he was dozing off and sent them for analysis. The paperwork is submitted to the Monroe residence after the fingerprints are matched. When Catherine opens the file, she is horrified to see images of Morgan, whom she refers to as “Carson,” calling him a “evil man.” Lauren learns that Harold has been killed and that Morgan’s flight never took off. When Lauren arrives back at the Monroe residence, Morgan has already kidnapped Catherine and taken her to the bunker. Lauren is subdued by Carson, who then admits that he drugged and raped Catherine thirty years prior. When they collided with the pedestrian, Archer was on his way to kill Carson; in addition, Carson was the one who killed Archer by ingesting the poison Archer had planned to use on him. As they struggle, Lauren fights back, and Carson claims to be Lauren’s biological father before Catherine grabs his gun and kills him. Together, Lauren and Catherine fill the bunker with gasoline and burn it on fire, eradicating any traces of Carson’s confinement. On April 20, 2020, the Tribeca Film Festival was to host its international debut. The COVID-19 pandemic forced a postponement of the festival, though. The movie’s distribution rights were purchased by Vertical Entertainment and DirecTV Cinema, who scheduled for May 22, 2020 release.

On the review aggregation website Rotten Tomatoes, Inheritance has a 24% approval rating based on 54 reviews with an average rating of 4.4/10. The consensus of the site’s critics is as follows: “This Inheritance should be fiercely refused. It is a would-be thriller that takes far too long to grasp the daffy promise of its weird premise.” The movie has 16 reviews and a Metacritic score of 31 out of 100, which indicates “generally negative reviews.”

Read More: Who Is Buck Sexton Fiance Carrie Flatley &amp; What Does She Do? Their Engagement Photos

Last Seen Alive: Where Was It Filmed?