Netflix’s “The Midnight Club” is a horror mystery-drama series that tells the story of a group of terminally ill patients who live together at Brightcliffe Hospice. The characters in the series are all interconnected in some way. It was adapted by Mike Flanagan and Leah Fong from Christopher Pike’s 1994 novel of the same name. Flanagan and Fong are the show’s creators. They devise a clandestine club in which members gather once a day at twelve o’clock in the morning to discuss terrifying tales. Once Ilonka, the main character, arrives at the hospice, a number of sinister secrets regarding the establishment are revealed.

Iman Benson brings Ilonka, the story’s main character, to life in this performance. Her presentation has received very positive comments from members of the crowd. Her genuine and fascinating performance as Ilonka has brought a new level of sophistication to the show’s atmosphere; as a result, she must have piqued the interest of quite a few viewers in her private life. Here is everything that we discovered about Iman’s background, from her family to her work, in case you are interested in learning more about her history. 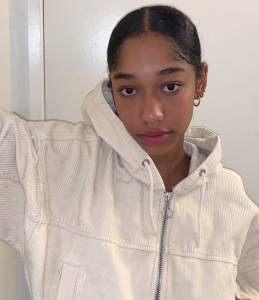 Iman Benson is an actress who was born on June 25, 2000, and she currently resides in Atlanta, Georgia. She is 22 years old. Her warm and encouraging family has been of tremendous assistance to her throughout her career as an actress, which she began pursuing at a very young age. She credits them with her success. Iman has a particularly close relationship with her younger sister, Suhialla, and she is really appreciative of the fact that Suhialla is a part of her life. Iman is one of two siblings. In a letter that she sent to her sister on the occasion of her 19th birthday, she wished her well and referred to her as “the one with the strong exterior but smushy inner and a heart of gold.” genuinely the most dependable, sturdy, and self-assured individual that I know. You are my compass, my rock, my protector, and my closest friend.

Iman disclosed to Harper’s Bazaar that her mum has been diagnosed with thyroid cancer during an interview with the publication. She continued to recount tales from her youth, this time talking about the memories she has of her father and her going to the cinema when she was younger. When asked how she became interested in acting and how she came to enjoy movies, the young actress responded by saying, “As a kid, I was just always intrigued.” When I was a kid, my father was a movie buff, and as a family, we went to the movies on every single Sunday. Therefore, when I was nine years old, I began doing theatre, and I suppose you could say that was the beginning of my love for the profession.

Also read: Erita Marriott: Who Is She? Meet The Actress From Antiques Road Trip

Iman’s father encouraged her early on in her pursuit of a career in acting, which she began when she was still quite young. She has always had an interest in acting as well as performing for other people. She began her career in the theatre when she was nine years old, and because she enjoyed it so much, she continued to work there and polish her craft for a number of years. Iman developed a deeper love and appreciation for her abilities as a theatre performer as she accumulated more knowledge and experience throughout the course of her career. Then, when she was just 14 years old, she got her first chance at acting in front of the camera when she began doing voice-over work and working on commercials. “I could not imagine doing anything else with my life. “And here I am,” she said to the magazine Glamour.

After appearing in a number of similar advertisements, Iman got her big break in the web series ‘Uncle Buck,’ playing Tia Russell. This led to her becoming a successful actress. Iman made a few appearances in major television programmes such as “Suits” and “Station 19” before winning her next significant recurring part as Reagan in the 2018 sitcom, “Alexa & Katie.” This role came about after she became enamoured with the world of acting and became hooked on it. After that, she was cast as the lead character, Drea Barris, in the upcoming television series, “#blackAF.” Iman’s participation in ‘The Midnight Club’ is another evidence that her professional life is progressing well and that she has a bright professional future ahead of her. It’s interesting to note that her performance of Ilonka is an homage to her own mother.

Is Iman Benson Dating Anyone?

No, it does not appear that Iman Benson is dating anyone at the moment. She is 22 years old and already has a lot of potential, so it makes sense that she would be intent on developing her skills and advancing her profession. Iman has not revealed anything about any significant other people in her life, and she has not disclosed whether or not she is currently involved in a romantic relationship with anyone. Iman is doing an excellent job at showcasing her skills and further honing herself as an actor, which is no small feat given the interesting projects she currently has in the works. Therefore, all we can hope for is that Iman continues to provide excellent content and has a joyful and successful life.

Also read: Patrick Mouratoglou Daughters: Who Are Charlotte and Juliette? Meet Children Of The Tennis Coach

Mike Flanagan and Leah Fong are responsible for the creation of the American horror mystery-thriller streaming television series The Midnight Club. Flanagan serves as the showrunner and executive producer for the series, while Trevor Macy is also on the production team. The series is an adaptation of Christopher Pike’s novel of the same name, which was published in 1994. It centres around a group of eight hospice patients who get together at midnight every night to share terrifying tales.

On October 7, 2022, Netflix presented the world debut of The Midnight Club.

An enigmatic physician oversees the operations of the hospice at Rotterdam Home, which is home to a close-knit community of seven young adults all living with terminal illnesses. They make it a habit to get together around twelve in the morning and share terrifying tales. One night, they come to an agreement that the one who is the first to die from their illness would be the one who is in charge of maintaining communication with the others beyond death. Strange things start to take place after one of them passes away.

the Natsuki of Aya Furukawa

Dr. Georgina Stanton, the mysterious physician who oversees the hospice for young adults, is played by Heather Langenkamp.

The Midnight Club, a young adult novel by Christopher Pike, will be adapted for Netflix by Mike Flanagan and Leah Fong, it was revealed in May 2020.

In an interview with IGN, Flanagan acknowledged that the horror anthology series Are You Afraid of the Dark? on Nickelodeon had had a deep influence on him.

Adia, Igby Rigney, Ruth Codd, Aya Furukawa, Annarah Shephard, William Chris Sumpter, and Sauriyan Sapkota serve as the titular cast, and Heather Langenkamp plays the medical director of the hospice for the terminally ill. Flanagan announced the cast in a series of messages on Twitter. There will be recurring roles for Zach Gilford, Matt Biedel, and Samantha Sloyan, who works with Flanagan frequently. Crystal Balint, Patricia Drak, William B. Davis, Larsen Thompson, and Iman Benson joined the cast in April 2021.

The project was supposed to wrap up on September 8, 2021, but instead it did so on September 10. Production on the project started on March 15, 2021, in Burnaby, British Columbia.

On October 7, 2022, The Midnight Club was made available on Netflix.

Read more: Patrick Mouratoglou Daughters: Who Are Charlotte and Juliette? Meet Children Of The Tennis Coach

What Happened to Robert Berchtold’s Family? Where Are They Now?