I Used To Be Famous Plot Synopsis

I Used to Be Famous is about Vince, a former member of a boy band who has fallen on hard times, and Stevie, a young man with autism who is a good drummer.

When Vince sees how talented Stevie is, he befriends him and starts a band with him. When Vince is asked to go on a tour with a successful former bandmate, he has to decide whether to leave Stevie behind to get a second chance at fame or to support Stevie and keep their friendship going.

So, does Vince choose to be famous over being friends? Let’s pay more attention to the movie. How do Vince and Stevie meet?

Vince’s music career ended when his boy band broke up, unlike that of his famous bandmate Austin. Vince now plays music on the street to make money, but no one seems to like him or his music.

His luck changes when Stevie sits down next to him on a bench and they play music together. Stevie uses the bench as a drum, and it’s clear that he has skills as a drummer.

Because of Stevie, a lot of people gather around them and use their cell phones to film the two musicians. Amber, Stevie’s mom, shows up and pulls him away, but Vince sees Stevie again when he sees him and his mom going into a church hall.

Here, he sees Stevie’s music therapy group for the first time and gets a second chance to see how talented the teen is. Vince’s music teacher, Dia, asks him to join them, and he does. They all play drums together.

Later, Vince finds out that the videos of him and Stevie performing on the bench have gone viral. He uses this to get a gig at a local pub, but he hasn’t asked Stevie to play with him yet, so his next step is to get the boy’s OK.

Also Read: Review Of Movie Jogi: Historical Tearjerker That Shines Light on the Tragedy of 1984 India

Does the gig go ahead?

Vince goes to Stevie and Amber’s house and asks to join them for tea and jammie dodgers. Stevie is excited about the gig after telling them about it, but Amber is worried about her son’s safety and doesn’t want Stevie to play in front of a big crowd.

Vince and Amber fight, and Stevie has a panic attack because of it. Amber is impressed that Vince is able to calm him down by recreating the drumming session from the music therapy group. Because of this, she agrees to the job on a whim.

Then, Stevie and Vince practice their act, and Vince learns more about Stevie, his love of music, and his wish to go to college for music.

The day of the gig comes, and Vince and Stevie take the stage after another act is done. Everything goes well, and the two do a great job, but when Vince sings one song too many, some people in the crowd start to get antsy. One man is especially rude, and he makes fun of the pots and pans Stevie is using as drums.

Vince gets angry and hits the man back. He and Stevie are then kicked out of the pub. When Austin, who was invited to the gig by Vince, sees his former bandmate picking himself up off the street, this embarrassing moment becomes even more embarrassing.

Vince tells Austin to leave and then checks on Stevie to make sure he is okay. Unfortunately, Amber is very angry, and she tells Vince to never come near her son again.

Does Vince stay away from Stevie?

Vince is sad when he finds out he can’t see Stevie, so he goes back home.

We find out a little more about Vince’s past here. He shows home movies of himself and his younger brother Ted, and we get to see the band they made when they were kids. Then, through flashbacks, we find out that Ted died and that Vince didn’t come to his brother’s bedside because he had to be with his band.

Vince still seems to feel bad about what happened, so he goes to his mother to ask for his brother’s harmonica. She tells him through tears that she has no idea where it is.

After he apologizes, Amber is a little more open to his relationship with her son, and all three of them go to the music therapy group. Here, Vince is asked to take charge of the group because it’s clear that he can connect with the other students.

Vince thinks about the offer, but when Austin calls him later, he has to make a different choice. 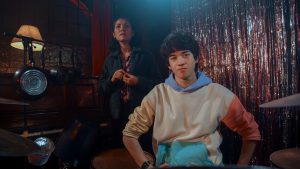 Also Read: In Better Homes and Gardens, what happened to Zack and Ellie Egan? Checking the Series’ Death Statistics

After seeing a video of Vince and Stevie performing, Austin realizes that Vince still has what it takes to perform on stage, so he asks Vince if he would like to play a few songs on his farewell tour.

Vince agrees and is excited about his second chance at fame. However, he is disappointed when Dennis, Austin’s producer, tells him that Stevie won’t be able to perform with him.

Vince breaks the bad news to Stevie. The young man seems upset, but he tells Vince to go for it anyway because he might not get another chance to become famous.

Does Vince choose fame over friendship?

While Vince thinks about going on tour with Austin, Stevie practices his drums to get ready for music school.

Amber goes to see Vince to thank him for helping her son learn about music and making friends. She also tells him to stay away from Stevie because she is afraid he will make false promises to her son.

One could think that this would make Vince want to leave Stevie and go on the farewell tour with Austin instead. Dennis later gives him a contract to sign, but he decides to spend his second chance at fame on his friendship with Stevie instead of signing the contract.

On Stevie’s birthday, he and his mom see signs on the street with directions for them. The signs lead them to a small concert stage, where they are surprised to find Vince. He sings a special song for Stevie and then invites him on stage, where they perform with other musicians, including people from the music therapy group.

Soon after that, the movie ends, but it seems likely that Vince took the teaching job he was offered and kept being friends with Stevie.

Why didn’t Vince take his second chance at fame?

Vince probably went back to Stevie because he didn’t show up for his brother before he died and didn’t want to miss this chance to help someone else who needed him.

Vince may have also realized that he didn’t need the approval of a crowd to feel good. Instead, it’s likely that Vince realized that friendship is all that matters and that he had what he (and they) needed in Stevie and his mom.

The film will be released on Netflix on the 16th of September 2022.

I Used to be Famous cast

Here is the team behind it all:

Read More: In the movie Descendants, why did Dove Cameron choose to wear a wig? Some Information Regarding the Color of Her Natural Hair

Mia Honey Threapleton: Who Is She? Facts To Know About Kate Winslet’s Daughter